Islanders 4, Flyers 3 (SO): Mason gets the hook as Flyers' comeback bid falls short 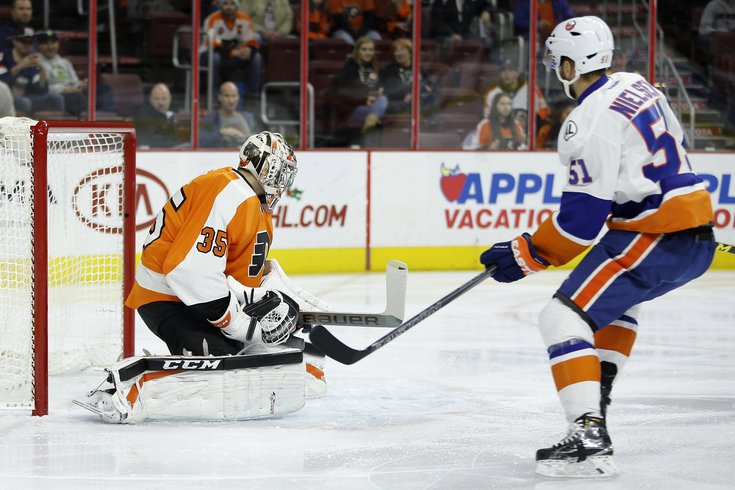 The Philadelphia Flyers entered Tuesday night's matchup against the New York Islanders as winners of four of their last five games. But based on the way the game started, you would be hard-pressed to find any evidence of that.

That's because starting goalie Steve Mason surrendered a goal just 55 seconds into the game on the first shot he faced of the night, which served as a grim sign of things to come for the 27-year-old net-minder.

But then in the second period, right around the time Mason gave way to backup Michal Nuevirth, the team we've become accustomed to watching over the last two weeks decided to show up.

"Every play, every goal for, every goal against -- it's a team game. So I wanted to make a change for our team," head coach Dave Hakstol said when asked why he had Mason on such a short leash. "And the group responded -- they responded in a good way -- and just kept pushing."

However, they were already trailing 3-1 at that point, and even their 30 shots in the game's final 40 minutes proved to be too little, too late.

In the end, the Flyers (11-11-6) had to settle for just one point, despite the fact that they outshot the Islanders, 46-26, and held them scoreless for the final 38-plus minutes of regulation and five minutes of overtime.

When it came to the shootout that followed, the Isles got the better of Neuvirth, and ultimately won, 4-3 (1-0 SO), on a Kyle Okposo goal. Considering the effort the Flyers gave Tuesday night -- it was one of their best games of the year despite the outcome -- this one's really going to sting.

"I thought our team played a good hockey game," Hakstol said. "We deserved better tonight, but that's the way this game is. Our guys competed and battled hard. We, unfortunately, couldn't get that second point."

Here's a look at what I saw Tuesday night at the Wells Fargo Center:

•    Steve Mason didn't make it past the the first minute and a half of the second period. As previously mentioned, the Flyers found themselves playing from behind almost immediately after the game began. Then, just 1:14 into the second period, Mason allowed his third goal of the game on the 10th Islanders shot, and his night was over.

It's been a rough stretch at home for Mason.

•    Michal Neuvirth played very well in relief of Mason. He .... Oh, and he bailed out young Shayne Gostisbehere with this third period save to keep the game knotted up at 3-3 with just over seven minutes remaining.

Neuvirth bails out Shayne Gostisbehere. Not on his watch. pic.twitter.com/bWMs8hUi7n

•    More of whatever that second period was, please. Once Neuvirth entered the game, the Flyers looked like a totally different team. It felt like nearly the entire 20 minutes were played in the the Islanders zone, and although the Flyers outshot their opponent 17-5 in the period, it felt more like 37-5. During the period, the Flyers had several chances but were only able to convert on one (Ryan White). It looked for a moment as if they were going to tie the game up at 3-3 on the power play, but Wayne Simmonds had a goal taken off the board on review because he kicked it in.

And the momentum from their strong performance in the period seemed to carry over after intermission...

•    The Islanders weren't the only ones able to get on the board early in a period. The third opened with the Flyers down 3-2 on the scoreboard, but playing like the much better team. And just 2:02 into the period, the Flyers tied the game up thanks to a laser from their captain.

•    The Flyers netted their second short-handed goal of the season -- the other came on Nov. 23 against Carolina and was scored by Claude Giroux -- during the first period. This time, it was Giroux setting up Pierre-Edouard Bellemare for his second goal in three games.

•    Overall, the Flyers' special teams looked a lot like they have much of the season -- inconsistent. Although they got the shorthanded goal, the celebration was short-lived, as the Islanders scored just 91 seconds later -- on the same power play. The Flyers have now allowed a power-play goal in three straight games (3-for-8 on PK) after holding opponents scoreless with the man advantage over their previous seven games (0-for-20). Just when it looked like they were starting to fix what had been a problem area for the team ...

And as for the Flyers' power-play unit, they didn't fair much better. They finished the night 0-for-2, which included Simmonds' near goal that was called off after review.

•    Frans Nielsen scored twice for the Islanders, and didn't waste any time doing so. His first came just 55 seconds into the game. His second was the one that ended Mason's night, and came just 74 seconds into the second period.

•    Oh, and just for good measure, especially since he went on to score the shootout winner...

The Flyers will now head out on the road for back-to-back games against two of the best the Western Conference has to offer. On Thursday, they'll face the 15-8-4 St. Louis Blues. The next night, they'll take on a Dallas Stars team that has the most points in the NHL (42). They then get the rest of the weekend off before returning home to host the Hurricanes next Tuesday.