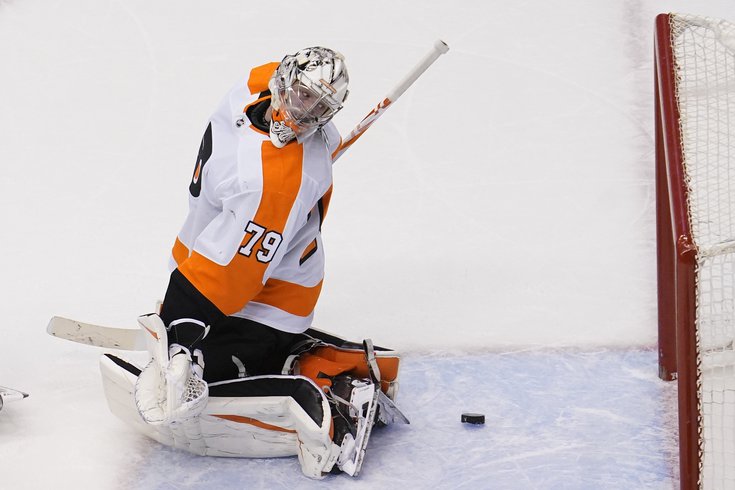 The Flyers were overmatched in Game 3, leaving Carter Hart to dry in a devastating loss.

It's Philadelphia — so whether or not it truly is time to panic, it's a pretty safe bet that's exactly what is going to happen for the 22 hours in between Game 3 and Game 4 of the Eastern Conference semifinal series between the Flyers and Islanders.

After a tantalizing, albeit brief, performance early on, the Flyers looked overmatched against the Islanders, faltering in Game 3, 3-1. It was an utterly underwhelming and disappointing performance for a team that had high hopes after some extra rest.

Back on the ice after what can only be characterized as a wild Game 2 on Wednesday, a game that saw Philly take and relent a commanding lead before prevailing in overtime thanks to Phil Myers, Philadelphia looked more like the Game 1 losers than overtime heroes.

Trailing their Northeast rivals 2-1, the Flyers will have a quick turnover before taking the ice for Game 4 Sunday night at 8 p.m. Before we turn the page, let's take a look at what happened in a very bad loss:

If we've said it once, we've said it, well, nine times. When the Flyers score first, they're nearly unstoppable.

At least they were.

Since returning to the ice in Toronto, Philadelphia had yet to lose after scoring the game's first goal, a trend that looked poised to continue Saturday..

With two unexpected days off, both goaltenders were able to take some time to rest, as any momentum gained from the Flyers' equalizing win — or the Isles' near three-goal comeback — seemed to have fizzled out as neither team was able to get on the board for the first 15 minutes of ice time.

However, there was no lack of buzzing from the Flyers, who fired six of the first seven shots on goal. A potent forecheck was testing New York early and eventually maintained possession led to a wrist shot fired through traffic by Tyler Pitlick that found the back of the net, putting the Flyers up 1-0.

In the time following the Pitlick goal, the Islanders were a bit feisty. But in the early going, Carter Hart stood tall against a barrage of Islanders' chances.

Hart gets a piece of it! pic.twitter.com/D8NfZaBG3X

It really doesn't matter how good your goalie is sometimes, when you are unable to keep the puck out of your end of the ice for long enough, a good hockey team like the Islanders will get something through. Hart has been great, but turnovers and sloppy play will eventually bite you in the butt.

And that's what happened, as a slowly moving puck got passed Hart (pictured above) to equalize things off the stick of Matt Martin. The goal came in the middle of a dominating stretch from the Islanders.

It wasn't until more than nine minutes elapsed in the second that the Flyers even fired their first puck on Semyon Varlamov (11:44 total time).

The Flyers looked to have their mojo back toward the end of the frame, but another turnover led to another Islanders shot attempt, and another slowly gliding goal with just five seconds left in the period. Leo Komarov's goal took the wind out of the sails for Philly heading into the second intermission, and certainly put them in an unenviable position — facing a possible series deficit for the first time this postseason.

Third's not a charm

It was undeniable that the third period Saturday night was the most important of the Flyers' entire season up to that point. They've lose more periods than they've won during the current series, and a terribly lazy goal given up at the end of the second put Philly in dire straights.

So what's the worst thing you can do to start the third? Committing the first penalty of the game is certainly at the top of the list. And coughing up a power play goal — a diving shot from Anders Lee (off a beautiful pass from Jordan Eberle) more or less gave the Flyers what they deserved, falling behind 3-1 with 16 minutes left to play.

Hart has made countless saves and smart plays, but his inadvertent redirect into the net, while apparently trying to block a passing lane, was perhaps one of the most unfortunate mistakes he's made in an undeniably impressive postseason performance.

Here's a good look at it:

With four minutes to play the Flyers went all out, using their first power play and an empty net to try to get back in it with a rare 6-on-4. An organized kill took care of business during the power play, as multiple shots on Varlamov were stopped.

This loss is 100% not to be pinned on Hart (who made 26 saves). The defense didn't have his back and the offense just lacked the focus and intensity that it had previously in the bubble. With a lot of hockey left to play, fans can only hope the team is able to adjust and use the quick turnover to blank their memory for a hugely important Game 4 Sunday night.