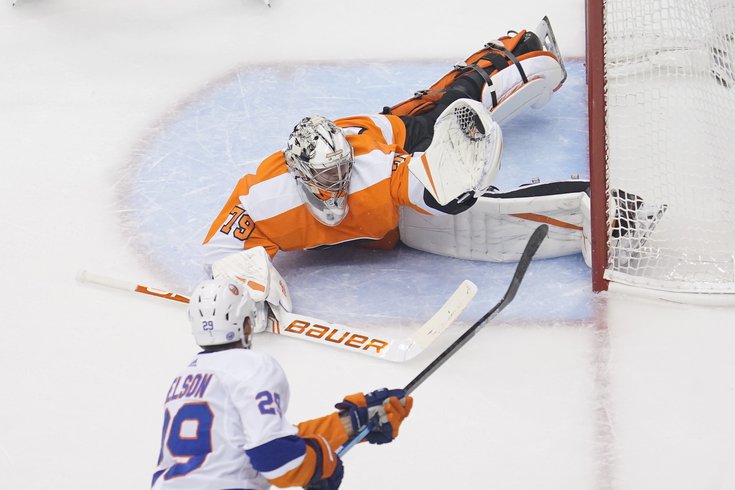 The Flyers may have been shut out 4-0 in their series opening loss to the Islanders, but as we talked about in this space on Monday night, only one of the goals could even be partially pinned on the team's 22-year-old net minder, Carter Hart, who has lived up to all expectations in his first postseason appearance.

Hart is 6-3 this postseason, but has played even better than his regular season numbers, posting a .938 save percentage and a 1.86 goals against average overall in the Toronto bubble. He also posted back-to-back shutouts in the Flyers' opening-round series win over the Canadiens, which came on the heals of his worst start of the playoffs, when he was pulled late in the second period.

MORE: Three reasons why the Flyers got smoked by the Islanders in Game 1 | Chuck Fletcher says Flyers must hit 'another level' if they want to beat Isles

In Monday night's loss, Hart may a couple of highlight-reel saves, including this one, that kept the Flyers in the game through the first two periods.

Unfortunately, the Isles blew the game wide open in the third with a pair of goals that Hart had no chance of stopping, plus an empty-netter to seal it.

But Hart's play has certainly not gone unnoticed by fans, and it appears oddsmakers have begun to catch on. According to DraftKings, Hart has the second-best odds in the NHL of winning the Conn Smythe Trophy, given each year to the postseason MVP. That was hardly the case when the postseason began, despite the Flyers being tied for the best chances to win it all at the time.

Before the start of round-robin play, Nathan MacKinnon (+1400), Nikita Kucherov (+1500) and Tuukka Rask (+1700) were the favorites to win the Conn Smythe at DraftKings.

Flyers listed with Conn Smythe odds at the time were:

Obviously those odds were last updated before the Islanders series started, but one loss won't set him back too far, especially if he can respond the same way he did following the Flyers' only blowout loss to the Habs, which he followed up with those back-to-back shutouts.

What's interesting is that Hart's Conn Smythe odds have skyrocketed at the same time as the Flyers' Stanley Cup odds have been dropping — they were tied with Vegas and Colorado at +600 for the best odds heading into the Habs series, but they've since fallen behind all three of the other remaining Eastern Conference teams following their Game 1 loss (+1080 according to TheLines.com's consensus odds).

Typically, although not always, the Conn Smythe winner plays on the Stanley Cup-winning team. But the Flyers actually have a little bit of history here. While Bernie Parent was the winner following both the Flyers Cup wins in the 70s, Reggie Leach won the award the following year despite the Flyers falling short of a Cup title. Just over a decade later, Ron Hextall was a Conn Smythe winner in 1987 despite the Flyers losing the series to the Islanders. The Flyers are the only team in NHL history who have done it more than once, and in the 32 years since, only one other player from a non-Cup-winning team (Jean-Sebastien Giguere, 2003) has won the award.

Could that happen again with the Flyers and Carter Hart this season? Let's hope the Flyers bounce back like they did after their 5-0 loss to the Islanders and get back to their winning ways so fans don't have to find out.