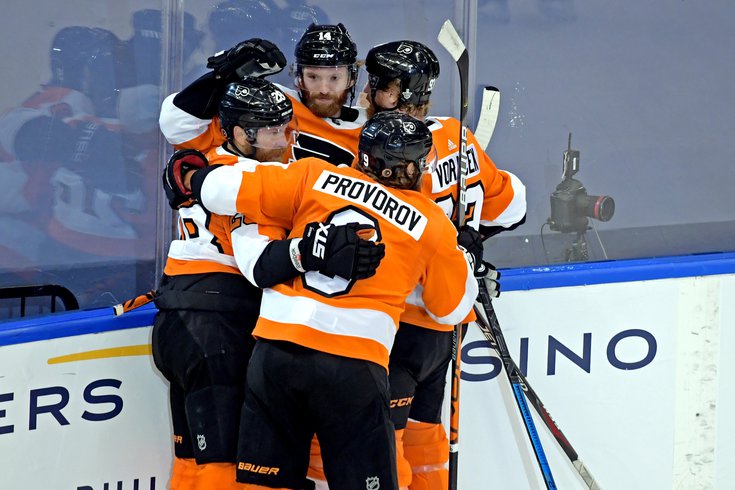 The Flyers survived after giving up a three-goal lead to beat the Islanders, 4-3, in overtime and even their Eastern Conference semifinal series at one game apiece.

It may have been a bit more drama-filled than expected after that quick start from the Orange and Black, but they got it done nonetheless — and perhaps it shouldn't have come as a surprise.

Here's a look at three reasons why they were able to get it done...

In the opening minutes of the game, it looked like it might be a repeat of Game 1, when the Isles came out buzzing and took an early lead, one that would've been even bigger had it not been for Carter Hart making a couple ridiculous saves look easy, something he's made a habit of doing in his young career.

New York had the first few chances of the game — and again seemed to look like the sharper team — but the Flyers needed just one shot to light the lamp and take the early lead, with Kevin Hayes beating Semyon Varlamov on the near side to end the franchise-record shutout streak he set just a minute earlier.

It's worth noting that, despite all the drama that would follow, the Flyers are now 8-0 in the bubble when scoring first — and are 0-3 when their opponents score first.

The goal seemed to wake up the Islanders a bit, who had the next several scoring chances and nearly scored on a couple of occasions from different areas, but no matter what they threw at Hart in the first period, he was ready.

Hart with a huge save on Beauvillier. He's been on so far in the first period. pic.twitter.com/d4zOlDiEwY

A couple of saves like that were enough to calm the Isles attack and open the window for Hayes to tally his second goal of the afternoon less than eight minutes later, this one a nifty move that again beat Varlamov on the near side.

That goal was set up on a nice clearance from Phil Myers that ultimately sprung Justin Braun and Joel Farabee, who picked up the assists.

But the Flyers weren't done yet.

Sean Couturier scored (from Claude Giroux and Travis Sanheim) with 4:51 left in the first to make it 3-0 — and cause the Islanders to pull Game 1 hero Varlamov in favor of Thomas Greiss. The goal was absolutely filthy. And, for the third time, it was a Flyers forward beating Varlomov on the stick side.

Yeah, that's worth another look.

That man has a family, Coots. pic.twitter.com/GBhh5HOmlR

That goal, and the second Hayes goal, are the type of goals we haven't seen a lot of from the Flyers this postseason — they actually had some space to make a move.

Chuck Fletcher said before the series that the Flyers had "another level" they could hit in this series, and they appeared to do that in the first 20 minutes of this one, even if they weren't able to sustain that level for the full 60 minutes. The first period was so good for the Flyers that the team even decided to troll fans who were critical after they were shut out in Game 1 (and scored just 11 times in six first-round games).

bUt aRe YoU gOnNa ScOrE tOdAy?

Maybe they should've waited to tweet that, as the Flyers would fail to score the rest of the regulation, but at least they still won. That could've been really embarrassing.

MORE: Flyers goalie Carter Hart has the second-best Conn Smythe odds in the entire NHL | Three reasons why the Flyers got smoked by the Islanders in Game 1

Hanging on for dear life

The Flyers looked much more like their Game 1 selves the rest of the way, being outshot by the Islanders, 26-17, over the next 40 minutes. And it wasn't even that close, as New York got the lion's share of good scoring opportunities, including all three of the goals scored in those periods. The first, from Anders Lee, came on the first of two power plays for the Isles in the second period, this one a Jake Voracek delay of game penalty.

For much of the second and third periods, the Islanders looked like the sharper team. They were winning the battles in their own offensive zone while doing a good job of beating the Flyers to pucks on the other end of the ice, tightening up all the space the Orange and Black seemed to find without issue in the first.

The big difference early on in this game — and the reason the Flyers were able to take a multi-goal lead into the third period, one they'd ultimately need — was Carter Hart.

Hayes might've had those two goals in the first, but for much of the game, the best player on the ice was the Flyers 22-year-old goaltender. He was tested early and often, stopping several shots that looked destined for the back of the net. It wasn't just about the number of saves for Hart — 31 on 34 shots — but the difficulty of some that he just made look routine, something he's done quite a bit of in his first postseason.

It wasn't until the third period that the ice really started to tilt in favor of the Islanders, who clawed their way back from a 3-0 deficit to force overtime.

They say a two-goal lead is the most dangerous lead in hockey, and that was the case for the Flyers in the third. They weathered the storm for the first half of the period, but then things really fell apart late. Anthony Beauvillier scored his seventh goal of the playoffs with 8:49 left to play to cut the Flyers lead to one. And six minutes later, with just over two minutes remaining, Jean-Gabriel Pageau scored his sixth of the playoffs to tie the game.

But that last goal did not come without some drama.

An inexplicable turnover led to the goal, but Flyers head coach Alain Vigneault challenged, claiming that there was an offsides before the score. There was a chance the suspected offsides came on the turnover, but that might not have been the play the referees looked at on the review, instead looking at the original zone entry by the Isles.

The replays on TV suggest that they totally botched this one, and looking at the wrong play altogether might be why. This certainly looks like offsides.

Did the officials review the wrong play or no? pic.twitter.com/amQrmmzEYD

Vigneault's plea to the refs that they looked at the wrong part of the play fell on deaf ears and the goal was upheld, leaving the Flyers down a man for the next two minutes — essentially the remainder of the game.

The Flyers were able to kill that off that penalty and survive regulation.

FLYERS WIN IT IN OT. pic.twitter.com/AMEJg3Z5yF

The Flyers defenseman, who hit iron in the third period with a chance to put the game away, found redemption in overtime to tie the series at 1-1. A loss in this one not only would've put the Flyers in a big hole, but would've absolutely crushed their confidence. Instead, they're right back in it.