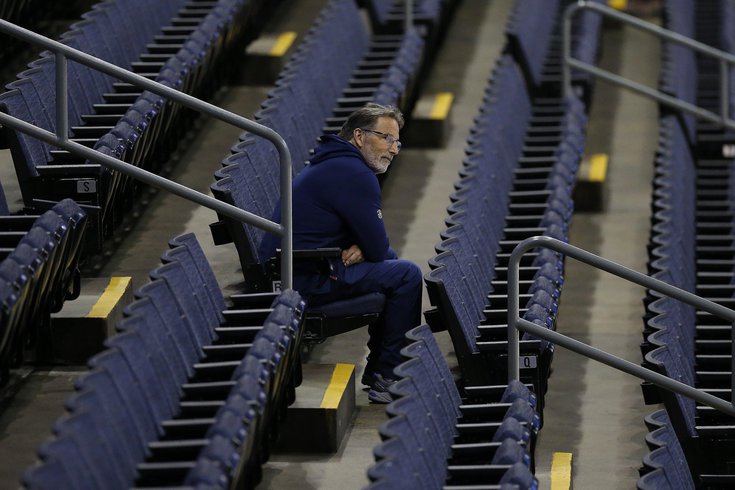 John Tortorella was introduced as the Flyers' new head coach on Friday.

An introductory press conference isn't a time or a place you'd expect to be high on introspection or self-awareness, but John Tortorella hardly shied away from any of it.

For the first time as the Flyers' new head coach, after word broke that he had been offered the job and then hired earlier in the week, Tortorella — and general manager Chuck Fletcher — met with the media over Zoom on Friday and spoke for around 50 minutes about his philosophy and evolution as a coach, his fit with the organization, and where the team goes from here.

He knows as well as anyone how much work there is ahead.

"I’m not afraid of what people are saying about the team. I get it’s out there. It fuels me. It does. It fuels me as far as some of the predictions, some of the thoughts of what’s going on with the team, what’s the process with us. That just fuels me. I’m looking forward to getting into the bunker of that locker room of the Flyers and getting about our business."

And he knows just as well that it's easier said than done.

The Flyers finished the 2021-22 season a complete mess. Through months of slow, sloppy, and uninspired hockey, what became a cap-strapped mismatch of banged-up veterans and underwhelming youth rode multiple losing streaks — including a 10-game and then franchise-record 13-game spiral — to the NHL's fourth-worst record and a general sense of apathy from the Philly fan base. Alain Vigneault was fired in December and Mike Yeo, who was promoted in the interim, couldn't do much else but mercifully get the team to the finish line.

They're in dire need of a shift in culture, and they're looking to Tortorella to create it.

"If we want to get to growing and who we want to be, that organization that people look at as a standard, then yeah, the culture has to change," Tortorella said. "Culture. Accountability. All those words. They are really cool summertime words. People like saying those things during the summer. I think us as coaches, when we get the job, it’s about the culture changing, the accountability. It’s real easy to say. Really difficult to do. That’s an everyday process."

Although he doesn't entirely agree with it, the 63-year old has a reputation that precedes him: A fiery, hard-nosed, and demanding coach known for instilling discipline, structure, and accountability amongst his players.

And he's been plenty successful throughout his career.

In 20 years as an NHL bench boss, Tortorella has won the Jack Adams for coach of the year twice (2003-04, 2016-17), guided the Lightning to their first Stanley Cup in 2004, turned the Rangers into a defensive powerhouse in the early 2010s, and saw the Blue Jackets to their first playoff series win and easily their best era in franchise history.

But he's had his fair share of criticisms too: His approach eventually wears his teams down, rubs certain players the wrong way, and ultimately has a shelf life, along with the thought that his defensive-minded system prevents more offensive-minded skaters from playing to their strengths and won't hold up into today's increasingly faster game.

Tortorella was pretty forthcoming about all of those knocks against him on Friday.

He admitted to mistakes made over the years, acknowledged that, like it or not, all coaches do have a shelf life in today's league, and that while he has butted heads with players — citing his relationships with Cam Atkinson and former Flyer Scott Hartnell while all three were in Columbus specifically — his goal always was, and is, to push them to be the best versions of themselves possible. Listening, communication, and fairness were repeated points of emphasis on Friday. 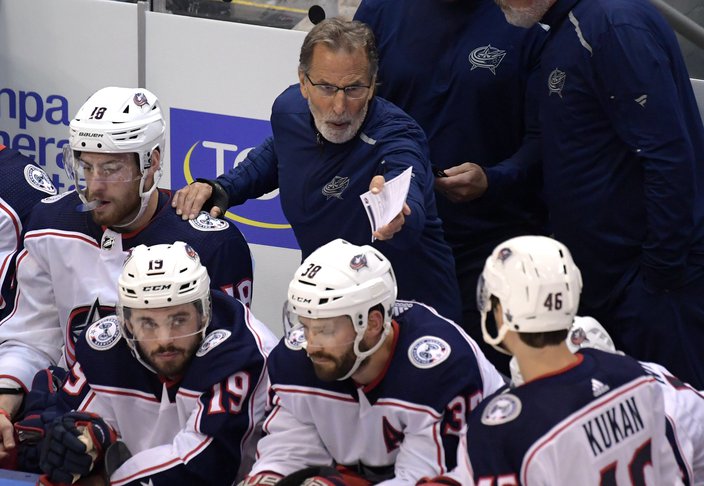 "Nobody personifies that better than John Tortorella."

As for that complaint about offense, It's a balance, one that Tortorella confessed to not always being great at striking. "Players need to express themselves," he said, and he's willing to let them do that so long as they're willing to take care of things when they don't have the puck.

"You need structure. I think one of the most important attributes of a head coach is to find and teach the structure away from the puck," Tortorella said. "I work at that. I kind of get coined as that defensive guy. You can coin me any way you want. You can say what you want about me. That is a huge part of winning. As you see in the playoffs right now, as you listen to some of the players talking about it in the playoffs right now, it’s a huge part of being who you want to be and I think it really develops a standard of being a hard team to play against."

"On the other side of that, I think you have to get out of the way. I do think we overcoach at times. It’s something I try to check myself daily as I’m dealing with the players, especially in the offensive part of the game. I don’t have the ability or the sight that offensive people have or the creativity that they have. I need to allow them to play, but it’s going to be a two-way street. It needs to be a two-way street, just show me that you’re willing to give us something away from the puck."

Tortorella added that he and Fletcher plan on adding an offensive-minded assistant to the coaching staff, one who would also oversee a power play that was a league-worst this season, but that search is just getting started.

He's spoken to some players already and plans to meet more of them in person over the next week as he starts getting them familiar with his process and prepared for what he said will be a "difficult camp" — Kevin Hayes is a visit he said he's looking forward to in particular because he believes there is more to be unlocked with him at center.

When the time does come for the Flyers to report, the first order of business is clear.

"I do believe the first thing, as far as on ice that I need to attack, is the play away from the puck," Tortorella said. "I think we need to give [goaltender Carter Hart] a little bit more support as far as how we play around him. Allow him to really get himself into the National Hockey League. He’s 23. 23 as goalie. I’m not making any criticisms of prior play, but this is how you go about it. That’s when you’re teaching that part, that’s when so many different avenues come into play in teaching what your identity is.

"Bottom line, I want the team to be harder. I think we need to present ourselves, look harder, coming off the bus, coming into buildings. I want other teams to say 'You know, what we’ve got our hands full tonight.'"

There's some work to do.