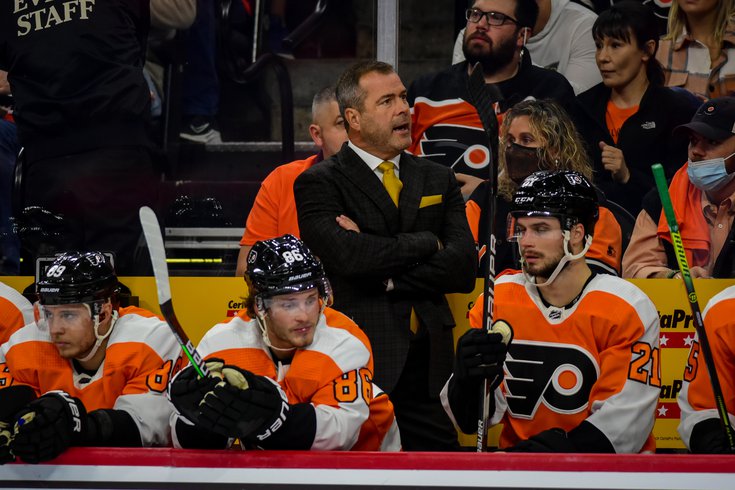 The Flyers have fired head coach Alain Vigneault just 22 games into his third season at the helm, according to multiple reports on Monday morning. The news was first reported by former Flyers beat writer Frank Seravalli, now with Daily Faceoff.

Seravalli is also reporting that Mike Yeo will be the team's interim coach while the organization searches for a full-time replacement. And former Flyer Rich Tocchet, who was recently inducted into the team's Hall of Fame, could be on the shortlist.

Mike Yeo will be #Flyers coach tonight vs. #Avs in second game of back-to-back.

We'll see where this goes, but my sense is Rick Tocchet will be high on Philadelphia's candidate list.

[UPDATE: The Flyers have since made this news official, and have also announced the dismissal of assistant coach Michel Therrien.]

Vigneault got off to a strong start as the Flyers head coach after he was hired back in 2019, leading the Flyers to a No. 1 overall seed in the Eastern Conference during that COVID-shortened campaign that ended with an earlier-than-expected exit from the bubble playoffs. And now, when looking objectively, that entire season was more or less propped up by one hot streak — an extremely hot one, at that — and was otherwise a disappointment.

From there, it's all been downhill.

The following season, the Flyers finished sixth in the Eastern Conference and missed the playoffs, which led to sweeping roster changes this offseason, changes that from the outside appeared to be massive improvements. But after a strong start to the 2021-22 campaign, the Flyers fizzled out in a major way. They've fallen all the way to seventh in the Metropolitan division and have lost eight straight games, and have been outscored 37-13 over that stretch.

Clearly, the writing was on the wall for Vigneault, as both the results and player development have not been there. In addition to the struggles on the ice, it's hard to point to any one or two players on the team and say they've improved under Vigneault's watch. Maybe you could've said that during his first season, but since it's been nothing but regression for him and his team.

The Flyers will now be looking for their 22nd head coach in franchise history, and their 19th in the last 40 years.

Worse yet, it will be their sixth coach in the last seven years.

Maybe the next guy can stick around a little longer.