Fedotov, who the Flyers planned to have backup Carter Hart, has been kept in Russia on mandatory military service 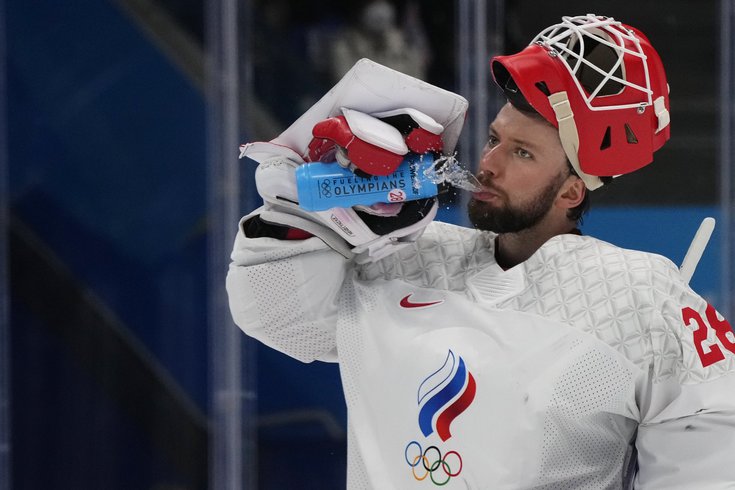 Russian officials detained and forcibly conscripted Flyers prospect Ivan Fedotov. He is pictured above during a game with Russian Olympic Committee team in the 2022 Winter Olympics in Beijing.

Word surfaced early Wednesday that Russian goaltender Ivan Fedotov had reportedly signed a three-year deal to remain with CSKA Moscow of the Kontinental Hockey League, but the team and the league have since denied the existence of a contract or any discussions of one.

Fedotov signed a one-year, entry-level deal with the Flyers in May after announcing his intentions to leave Russia for a career in the NHL.

The Flyers intended to have the 25-year old netminder come over and serve as the backup to Carter Hart, but that plan quickly fell apart when Fedotov attempted to leave Russia.

On July 1, reports surfaced that Fedotov had been arrested by Russian law enforcement on allegations of evading military service and was being detained in St. Petersburg. In Russia, men between ages 18 and 27 are required to serve at least one year in the military, a law that is also upheld by CSKA Moscow due to its ownership history with the Russian Defense Ministry, with evasion of it being punishable by up to two years in prison.

Fedotov was forced into enlistment, then sent to serve at a military base in the country's far north.

Taken in the seventh round of the 2015 draft by the Flyers, Fedotov was a rising star in Russian hockey, highlighted by a 2021-22 campaign that saw him backstop the Russian Olympic committee to a silver medal at the Winter Olympics and CSKA Moscow to the KHL's Gagarin Cup title.

A run in the NHL with the Flyers seemed like the clear next step, but the Russian government, strict in its stance with its invasion of Ukraine in the background, brought any ideas of it, and Fedotov's hockey career entirely, to a forcible halt.

Flyers general manager Chuck Fletcher has since been unable to comment on Fedotov's situation due to the highly sensitive nature of it.

On Wednesday, CSKA Moscow and KHL leadership were outright in their denial of a new contract for a goaltender.

"The head of the club did not meet with Ivan Fedotov, as he serves in the armed forces of the Russian Federation," CSKA Moscow president Igor Esmantovich said in a statement on the club's website. "Accordingly, there was no discussion, no contract exists. I would like to appeal to journalists who shamelessly and illiterately try to promote themselves on this, and ask them to stop such speculations."

“The rights in the KHL to goalkeeper Ivan Fedotov belong to CSKA. At the moment, the league has not received documents to register a contract with a hockey player or requests for the possibility of concluding a contract with Fedotov,” the league told Russian state owned news agency TASS (via The Philadelphia Inquirer).

Fedotov's legal defense filed a complaint to the state to have the decision on his military service invalidated. The preliminary hearing for it will be held on September 20.

Fedotov's NHL contract at one year for $925,000 is still on the Flyers' books, per CapFriendly, but is currently considered a non-roster deal.