The Flyers' additions and subtractions by the numbers

After signing Owen Tippett to a two-year deal, the Flyers still have a handful of RFAs to get under contract with minimal cap space 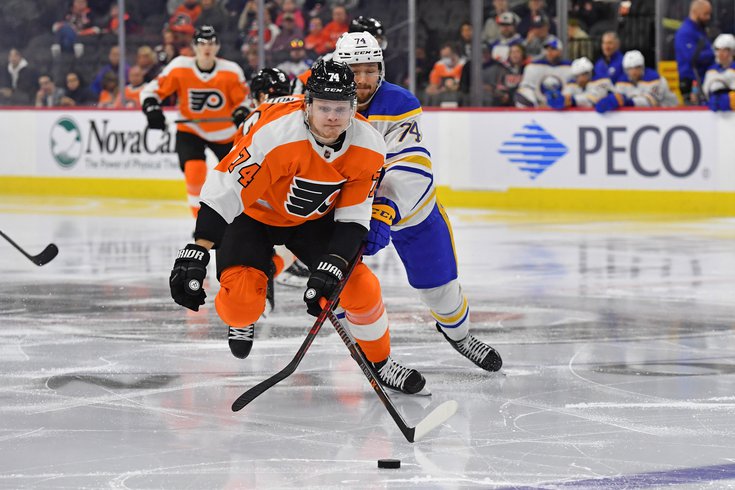 The Flyers' Owen Tippett chases after the puck against the Buffalo Sabres back on April 17, 2022.

The Flyers inked right winger and restricted free agent Owen Tippett to a new two-year contract on Friday, giving the 23-year-old the runway to become a fully established NHLer in Philadelphia while also nearly wrapping up the club's offseason to-do list – however disappointing it has been.

Cap space is extremely tight though – the sole reason why the "aggressive retool" was stopped short of an attempt to sign Johnny Gaudreau – and as of Saturday, the Flyers are actually just shy of $1.6 million over the $82.5 million limit with MacEwen in salary arbitration and Allison on the bubble of cracking the roster so long as he can stay healthy through camp.

There's still a bit of work left to do, but for the most part, the group the Flyers are heading into the 2022-23 season with is just about there.

Here's the full list of the Flyers' offseason player additions, subtractions, and retentions thus far, along with the handful of names still up for new contracts.

Tony DeAngelo was brought in at the draft as insurance for Ryan Ellis on the blue line, then Justin Braun returned on a one-year deal alongside bruising forward Nic Deslauriers on a four-year contract.

Other than that, the Flyers made a bunch of depth signings that can hop between here and the minors as needed. They didn't have room to do much else, banking their success on the same, but hopefully healthier roster, now minus Claude Giroux and with John Tortorella trying to set them straight.

In that same turn, at least as far as the offseason goes, buying out Oskar Lindblom stands as the team's only significant departure.

But again, that's with a roster that finished as the fourth-worst team in the league last season.

Tippett, as mentioned earlier, will now get a clear shot at becoming an established NHL player in Philadelphia after Florida shipped him out as the key return in the Giroux trade.

Frost is also returning on a one-year "prove it" deal still trying to reach his potential as a first-round pick from five years ago.

For the most part, the RFAs the Flyers extended offers to are relatively younger players with something to prove, and the ones they have signed already each come in at a low cost.

*Two-way signing; 10.2 (c) – Did not have enough professional service time to qualify as RFA

It's more of the same for the RFAs the Flyers still have to sign as well. Although MacEwen is a bit of a curious case now that Deslauriers is here.

And again, with Allison, he's been on the verge of making the Flyers for a long time now, but injuries have stopped him short. His future rides on his health.

*Non-roster player; 10.2 (c) – Did not have enough professional service time to qualify as RFA