What they're saying about the Flyers after deflating free agency

The "aggressive retool" got real gun shy all of a sudden. 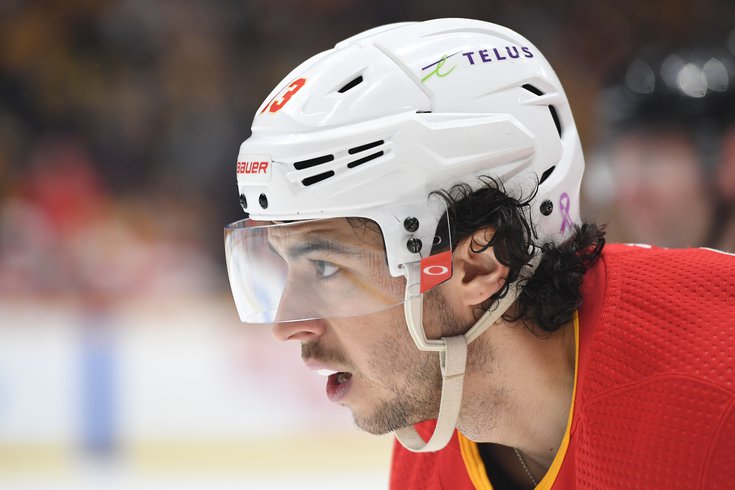 The Flyers were a no-go on Johnny Gaudreau.

It's the day after.

The Flyers do not have Johnny Gaudreau. He's off to Columbus.

They needed to clear cap space. They didn't.

They needed to shed the final year of James van Riemsdyk's $7 million cap hit to get the space. They refused.

Per multiple reports over the last few days, attaching a first-round pick in a trade was too high an asking price, despite Chuck Fletcher showing the past two summers that he has zero issue sending multiple picks away.

All of a sudden, the "aggressive retool" got real gun shy.

And after just a few hours spent in free agency, all the Flyers are walking away with: Returning d-man Justin Braun on a one-year deal, fourth-line bruiser Nic Deslauriers on a four-year contract, and a handful of AHL-level signings.

"We're done," general manager Chuck Fletcher said late Wednesday. "We're out on all the remaining free agents with the reality of our cap situation right now. It probably precluded us from looking at some of the more expensive options in the market today, but today to us is more about depth signings, getting guys that make us a little bit harder to play against, and making sure we have some players on two-way contracts that can move between Lehigh Valley and Philadelphia."

Here's a look at what they're saying about the Flyers after a baffling and deflating free agency run:

In ESPN's roundup of winners and losers from the first day of free agency, the Flyers were right at the top of the list for the latter, and you'd likely be hard-pressed to find many fans who would disagree.

They couldn't go in on Gaudreau, largely because of their cap decisions over the past year completely handcuffing them, and had no other backup plan, at least from what they've shown.

They sat on their hands.

If Flyers fans were frustrated with the direction of the team before free agency started, it's hard to imagine how they're feeling now.

GM Chuck Fletcher had talked about an aggressive retool of his team, rather than a rebuild. When the Flyers traded for defenseman Tony DeAngelo and signed him to a two-year deal, it looked like a harbinger of that plan. But then Wednesday arrived with the Flyers having an excellent shot at the biggest prize on the market: Winger Johnny Gaudreau, who grew up in South Jersey as a Flyers fan. There was mutual interest. What there wasn't was cap space, and Fletcher said the price to create any more of it for the only franchise player on the market was too high.

"We don't have the space to pursue those high-end free agents," he said. "You have to move multiple contracts. In some cases it's hard to move players and in other cases there are players you don't want to move."

In the same breath, Fletcher said the Flyers have good forward depth but "we'd like to get more high-end skill." Huh, if only there were a forward that fit that description on the open market who probably had black and orange pajamas... [ESPN]

The Flyers' moves in the past week just aren't going to sit well with a fanbase already battling apathy toward this team.

In fact, intentional or not, these decisions feel like they were made in disdain of it, as The Athletic's Charlie O'Connor writes:

In late January, both Fletcher and Comcast Spectacor chairman and CEO Dave Scott promised that the brain trust would soon “aggressively retool” a team that had proven to be one of the worst in the NHL to that point. Scott in particular vowed that “we should be in it next year.” And while Fletcher slightly amended the promise in May, he still compared their plan to that of 2019, when the team added Kevin Hayes, Matt Niskanen and Justin Braun, moves that ultimately helped push them comfortably into a playoff spot. The message from the brass to fans was clear and unequivocal: we’re going to fix this in the near future, so expect big moves.

What did those fans get? Tony DeAngelo, an offense-first defenseman who was kicked off his second-to-last team and who stands as one of the most divisive players in the NHL. Nicolas Deslauriers, a 31-year-old enforcer who has averaged six goals a year for the past five seasons. Oh, and a now-35-year-old Braun was brought back after being traded at the deadline.

There’s your aggressive retool. [The Athletic]

He also caught a few fans at the team's training center in Voorhees just before Fletcher's press conference. They weren't very happy with him.

The fans who showed up to Voorhees to express their dissatisfaction: pic.twitter.com/K3Hz40eqTI

(Unrelated note: Flyers Training Center is such a downgrade from the Skate Zone.)

So what's the plan here?

The Flyers' trades say "retool," but then they got to free agency with Gaudreau on the market and went conservative in a way that says "rebuild."

Fletcher's plan, if there even is a plan, lacks so much consistency, as The Inquirer's Olivia Reiner tried to process:

A rebuilding team doesn’t trade three draft picks (a 2024 second-round pick, a 2023 third, and a fourth in 2022) for defenseman Tony DeAngelo plus a seventh-rounder in 2022 and then sign DeAngelo to a two-year, $5 million AAV contract. A rebuilding team wouldn’t sign defenseman Rasmus Ristolainen to a five-year, $5.1 million AAV deal before the trade deadline. A rebuilding team doesn’t give 31-year-old fourth-line enforcer Nicolas Deslauriers a four-year, $1.75 million contract, especially when he has never played on a contract worth more than $1 million annually. Would you rather have middle pairing defensemen DeAngelo and Ristolainen for a combined $10.1 million or a bona-fide superstar in Gaudreau for $9.8 million per year?

By letting Gaudreau, the definition of skill and speed, not to mention a local athlete, sign with Columbus without even putting up a fight, Fletcher showed he has one foot in an “aggressive retool” and the other in a rebuild. Time will tell what result this nets the Flyers, but still, the plan lacks consistency. If the plan is not a retool and it’s not a rebuild, then when do the Flyers expect to be competitive again? [The Inquirer]

Pat Higgins (@patmakesart on Twitter and Instagram) routinely kills it with hockey and videogame-centric art, so much so that the Flyers even commissioned him to make the print that was given out at Claude Giroux's 1,000th game.

Had Gaudreau put pen to paper in Philadelphia, he was ready to go. Alas...

Welp. At least I like how this turned out. pic.twitter.com/oYRXZUNUbK

He did make some quick updates after the news broke. Congrats, Columbus.

Something to smile about

This has been a pretty frustrating article. How about we cap this off with some better vibes? Just, unfortunately, not really Flyers-related ones.

Here's Claude Giroux all smiles with his son Gavin after signing a three-year deal with his hometown Ottawa Senators.

At least there was a big homecoming for someone on Wednesday.