Flyers to buy out Oskar Lindblom

Strapped for cap space, the Flyers chose to clear out the fan favorite's $3 million salary 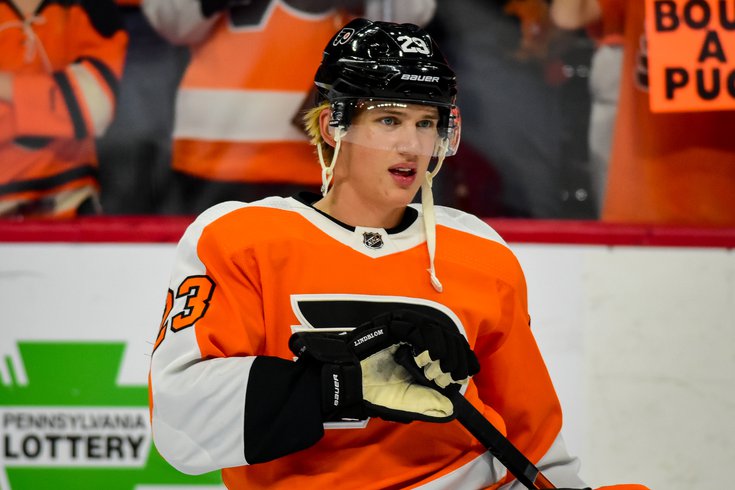 The Flyers have placed Oskar Lindblom on waivers for the purposes of a buyout.

With barely any headroom underneath the $82.5 million salary cap, and the team needing to get a list of restricted free agents under contract, the 25-year-old winger's $3 million cap hit for next season was seen as an immediate way to clear space. It'll actually free up an extra $333,333 too because he's under 26.

But for fans, and likely many within the organization, this is an extremely tough pill to swallow.

Lindblom signed his current contract — a three-year, $9 million deal— in July 2020 after he had beaten Ewings' Sarcoma in a battle that saw the Flyers, their fans, and the entire NHL world rally behind him.

Through five seasons in Philadelphia, the 2014 fifth-round pick out of Sweden had 50 goals and 47 assists in 263 NHL games, and was in the midst of a breakout 2019-20 season before his cancer diagnosis in December 2019 threw everything off the rails.

The battle should have ended his season entirely, but because of the season's COVID-19 pause, his treatments going well, and the Flyers advancing to the second round of the playoffs inside the Toronto bubble in August 2020, there was a shot to return.

The Flyers just had to push their season into September.

"When Oskar was diagnosed with cancer, I had numerous talks with our doctors about is there a chance I can get him back for the playoffs," former Flyers coach Alain Vigneault said at the time. "Obviously the answer was no, he wouldn’t. Come next training camp in September, he should be back if everything went the way they thought. Things have gone the way they thought. This year obviously with the stoppage in play and COVID factor, the season has been stretched out. September is a little less than a month away. I was told come training camp he would be able to play in September.

"I guess we got to get to September."

They got there, and Lindblom was in the lineup for Game 6 of the series against the Islanders, stepping onto the ice to stick taps from both teams.

Since returning, however, Lindblom hasn't been the same player, understandably needing plenty of time to regain his strength and conditioning for a full return to form.

In the COVID-shortened 2021 season, Lindblom put up just eight goals and 14 points in 50 games, then 12 goals and 26 points through 79 games this past season.

But he remained a fan favorite throughout. OskarStrong shirts raised thousands for charity, purple Hockey Fights Cancer No. 23 jerseys were a hot item at the Wells Fargo Center, and his story has inspired countless others in their own battles with cancer.

No doubt, Tuesday's decision won't go down as a popular one among fans, especially in what has already been a few days' worth of unpopular decisions from the Flyers' front office.

"This was a very difficult decision to make and one that we spent a lot of time examining," general manager Chuck Fletcher said in a statement. "No one can question the desire, will and strength to overcome all that Oskar has been through off the ice in order to return to the game he loves. Further, Oskar's commitment to his teammates and impact in our room has been immeasurable. He is truly an inspiration to us all and he will always remain a special part of the Philadelphia Flyers family. We wish him all the best as he continues his NHL career."

The Flyers said they will be donating $100,000 in Lindblom's name to a local organization that supports families impacted by cancer in honor of his impact on the city and the team.

The Flyers had until 5 p.m. Tuesday — the deadline for the NHL's buyout window — to decide whether they were going to put Lindblom on waivers. Once the buyout goes through, the club will have just over $3.4 million in cap space, with qualifying offers already extended to RFAs Wade Allison, Jackson Cates, Morgan Frost, Hayden Hodgson, Linus Hogberg, Tanner Laczynski, Zack MacEwen, Isaac Ratcliffe, and Owen Tippett.

They can gain further relief if defenseman Ryan Ellis goes on long-term injured reserve to start the season as well, which isn't out of the question with the status of his rehab still a mystery and would free up $6.25 million for as long as he's on it.

But if Chuck Fletcher's "aggressive retool" has greater ambitions for when free agency opens on Wednesday, such as a run for local star Johnny Gaudreau, the Flyers are still going to need to clear more room. under the cap. James van Riemsdyk, with one year at $7 million left on his deal, has long been thought of as the obvious piece to move, but according to the DailyFaceoff's Frank Seravalli, the rest of the league is well aware of that and trying to get more out of the Flyers as a result.