Flyers circle back around with Tony DeAngelo trade 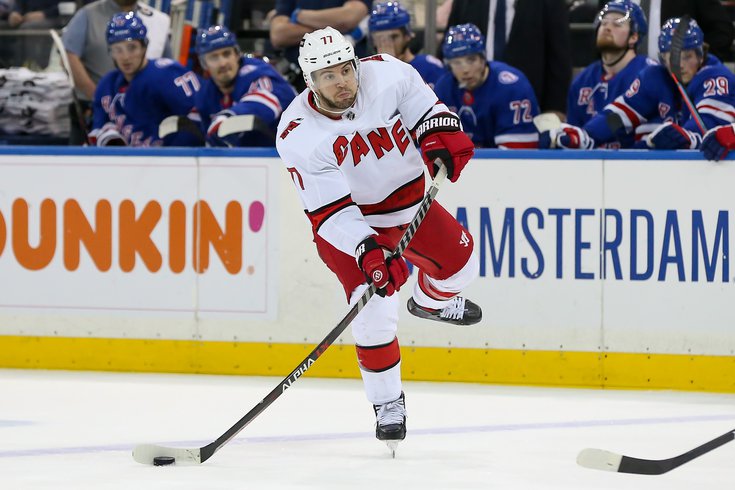 After two days in Montreal, Chuck Fletcher and company walked away with...

If the goal is to re-establish the Flyers as a tough team to play against, these prospects can certainly help uphold that idea, so long as they develop, stay aggressive and continue to throw the body around.

"It's not a secret, we didn't have a very good season," Danny Briere, the former Flyer and current assistant to the general manager, told NHL Network on Friday. "The last two or three years have been tough on the Flyers. We felt that the culture is probably not where we wanted it to be, that's where [head coach John Tortorella] comes in... Sean Couturier will be back, a lot of guys that will be back, but we want to bring some guys that have that swagger, those leadership qualities, and we felt that both Cutter Gauthier and our next pick too, Devin Kaplan, we felt that they're both bringing that."

But what about beyond that?

Look, Flyers fans are still battling a major case of apathy towards this team after last season, and the club's biggest move on Day 2 of the draft, along with the ensuing justification of it, won't do any favors for many of them.

In fact, in terms of the on-ice product, it might have confirmed their biggest fear. This team is spinning their wheels.

The Flyers sent their 2022 fourth-round pick, one of their three 2023 thirds, and their second in 2024 to Carolina for the pending RFA rights to controversial defenseman Tony DeAngelo and the Hurricanes' 2022 seventh-round selection. DeAngelo will also reportedly sign a two-year contract extension at $5 million per.

There is a need for the South Jersey native's skill set, especially with the timetable for Ryan Ellis' rehab still a mystery. The 26-year old blueliner is a right-handed shot who can move the puck and quarterback a power play, and by all means, did have a productive season down in Carolina with 51 points.

The problem is DeAngelo comes with a ton of baggage.

In juniors, he was suspended twice by the OHL for verbal abuse of an official and then a teammate under the league's policy barring racist, sexist, and homophobic language. Then in the NHL, DeAngelo was suspended three games for physical abuse of an official with Arizona in 2017, and with the New York Rangers, grew combative over social media — mainly over his support of Donald Trump and his downplaying of the COVID-19 pandemic — and was ultimately ousted from the team after multiple incidents that culminated in a physical altercation with goaltender Alexander Georgiev in early 2021.

With his career on thin ice, DeAngelo was able to keep his head down on a one-year deal in Carolina, and the Flyers believe things will continue to stay that way.

But whether fans believe that and can be comfortable with his presence on the team will be up to them.

"You certainly have to appreciate their opinion," Fletcher said. "He's made some mistakes and he's apologized for them. He's suffered consequences for them. Some of the mistakes earlier in his career, he hasn't had any repeat offenses, so to speak. I think he's maturing, and from everything we can gather, he's working hard to be a better person both on and off the ice."

There's also the matter of the cost it took to bring DeAngelo in, both the immediate one paid at the draft, and long-term going back to last summer and now well into the future.

The Flyers wanted DeAngelo for his offensive talent and sent three picks over three years to Carolina to get it, plus $10 million to retain him for the next two seasons.

"We're not expecting him to come in and be an elite defender," Fletcher said. "We wanted to get him so we don't have to defend as much."

Last summer, the Flyers traded away Shayne Gostisbehere, a defenseman of a highly similar offensive skill set, to Arizona WITH their 2022 second-round pick and one of their 2022 sevenths for no return, just two years of $4.5 million in cap relief.

They went in a circle.

Multiple draft picks shipped out and $35.5 million spent from a cap-strapped team already, just to end up with a bigger version of Hägg and, to put it generously, a troubled version of Ghost. Oh, and now they don't have a second-round pick through 2024.

Cutter Gauthier has size, good hands, a wicked shot, and is a top prospect that hopes to join the Flyers sooner rather than later after a freshman season at Boston College.

Devin Kaplan, taken in the third round, will need much more time to develop but is of a similar style and promise.

But will the Flyers have moved the needle any by the time they get here?

Because right now, this looks like a team spinning their wheels.