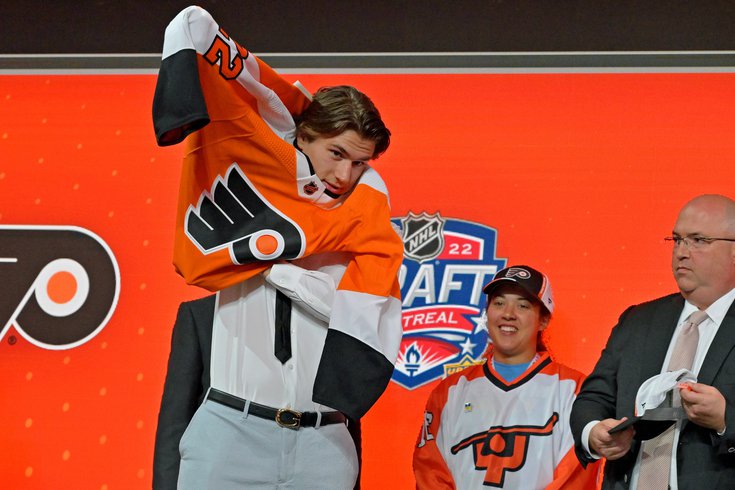 Cutter Gauthier puts on his Flyers jersey after being selected fifth overall by Philadelphia in the 2022 NHL Draft on Thursday.

He had put in a great season for the US National Development Program, impressed at the scouting combine, interviewed well, and knew the Flyers had interest in him.

He did everything he needed to do, and early into the first round of the NHL Draft Thursday night, was on the stage in Montreal, putting on an orange and black jersey as the fifth overall selection to Philadelphia.

"I’ve done everything I can to be where I am today," Gauthier said following the pick. "I’ve put in all the hard work over these past 18 years to get to where I am, so I had a great night of sleep last night. There was nothing left I could’ve done, and I was super happy with everything I did."

In a draft year where the top five were anything but predictable, the big forward prospect might have stood as the most consistent part of it.

Listed at 6'2" and 200 lbs., Gauthier was the third-ranked North American skater by NHL Central Scouting, building his profile through size, physicality, great hands, and a powerful shot.

He put up 34 goals and 31 assists (65 points) in 54 games with the US U18 Team, and with the ability to shift between center and wing, saw his stock rise in the weeks leading up to the draft and his connection to the Flyers grow more and more frequent through multiple mock drafts.

There's plenty of work still ahead now that Gauthier is in the system, but his ceiling is high.

"It was an upside play," general manager Chuck Fletcher said Thursday night. "I think he’s a good player. Everybody has a backup game, I guess you would call it, but he certainly has upside. The way he shoots the shots the puck, the way he drives with the puck, again, size, strength. He brings so many attributes that every team could use more of, including ours.

"He’s extremely athletic. His test results at the combine were impressive, and he still feels he can get stronger. He’s a better judge of that than we are, but he works hard and pretty relentless kid. Pretty impressive, the level of maturity he's showing now, so it’s exciting to see where he can get to."

The 18-year old, who is committed to Boston College, said he models his game after Winnipeg Jets forwards Mark Scheifele and Pierre-Luc Dubois, "Both big power forwards with lots of skill," he explained. "Can control the pace of play at any time."

Fletcher sees parts of Jeff Carter in him too.

"They’re a little bit different players, but kind of those big centerman that can come through the middle of the ice with the puck," Fletcher said. "If he ends up playing on the wing, he can handle the puck off the wing and drive to the net. He’s just a big power forward. Some differences with Scheifele, but yeah, some similarities to Dubois, those types of players.

Gauthier believes that won't take long to find out.

"Yeah, I think one year in the NCAA and then I'll be ready to play in the National Hockey League and help the Philadelphia Flyers win a Stanley Cup in the near future," he said.

"He will be going to Boston College next year," Fletcher said with a laugh. "We’ll go from there."

Hey, the kid's definitely not lacking in confidence.

"Yeah, confident, energetic, personable. He showed a lot of compassion for his teammates. He talked about his teammates in a really positive fashion," Fletcher said. "Confident, but yet I think the team orientation is really strong...To his credit, he’s found a way to continue to get better, and I’m sure that does instill a little confidence in him."

"I think just through all the hard work I put in, there’s nothing else I would’ve left on the table," Gauthier said. "I worked my butt off to get to where I am today and it’s all the little things to get here. I’m super excited for this moment and super confident as well."