How ready are the Flyers for free agency?

Cap space is tight, and landing a star like Johnny Gaudreau is going to be a tall order 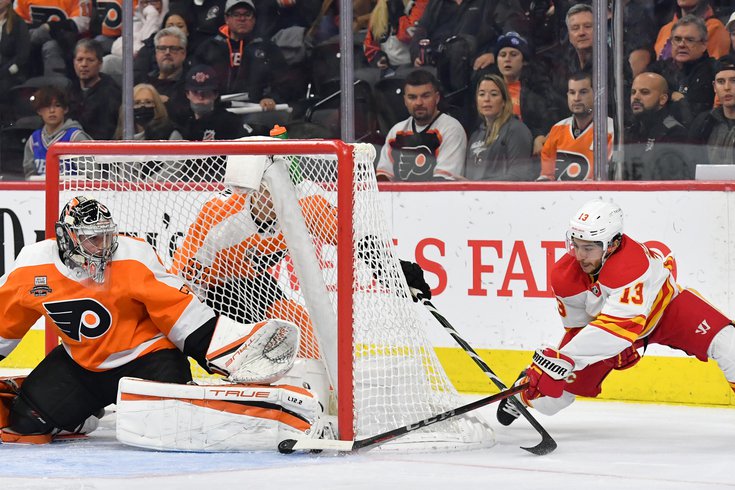 How prepared are the Flyers to make a splash? That all depends on how much cap space they can clear in the dwindling hours before then.

If a big-name star like Johnny Gaudreau is truly who they're after, then general manager Chuck Fletcher is really going to have to get creative and fast.

The Flyers already placed fan-favorite Oskar Lindblom on waivers for the purpose of buying out the last year of his contract, which will save $3.33 million. But that leaves the Flyers with just a bit more than $3.4 million of wiggle room, with qualifying offers already extended to nine RFAs — Wade Allison, Jackson Cates, Morgan Frost, Hayden Hodgson, Linus Hogberg, Tanner Laczynski, Zack MacEwen, Isaac Ratcliffe, and Owen Tippett — and the asking price for Gaudreau looking to be upwards of $10 million a year over eight years, per the Daily Faceoff's Frank Seravalli.

My sense is #Flames have put an offer on the table for Johnny Gaudreau - north of $10 mil x 8 years - that would make him not only highest-paid player in Calgary franchise history, but among richest in #NHL.

If Gaudreau walks, it likely won't be because of money.

Last month, we looked at how realistic a scenario Gaudreau signing with the Flyers is, and while some of the info has since become outdated, the overall points remain the same.

The high-scoring winger is a South Jersey native, grew up a Flyers fan, has family in the area, and there would be a lot of sentimental value in the 28-year-old returning home still in the prime of his career — not to mention what an undeniable draw it would be for a team battling apathy from its fan base.

But at the same time, he's expected to come at a heavy price tag, and if a run at the Stanley Cup is in Gaudreau's sights, then the Flyers are handcuffed by being both a bad team and a highly expensive one.

Veteran winger James van Riemsdyk, with one year left on his contract at a $7 million cap hit, has long been thought of as the obvious piece to move to clear space in a potential Flyers run at Gaudreau, though it seems the rest of the league is well aware of that too.

"Will Philadelphia be busy? If the Flyers are to position themselves for a run at Johnny Gaudreau, they must clear space. Oskar Lindblom is not yet 26, so if bought out, there’s a $3.33M cap saving for 2022-23. (It’s a tough thing to consider. Hard not to root for Lindblom, who overcame Ewing’s sarcoma to resume his NHL career.)

"The Flyers have also been considering another move, although they could go in several directions. GM Chuck Fletcher wouldn’t say much about his plans for James van Riemsdyk, but anyone who scores 24 goals has real value. Philadelphia may have to attach a sweetener to do it, but $1M of his $5M cash salary will already be paid via a bonus. Arizona, Buffalo and Seattle have been linked to the winger." [Sportsnet]

And Seravalli at the DailyFaceoff:

"Yes, of course cap space is tight, but the Flyers have been a little surprised in how steep the price is to move their leading goal scorer. The belief is teams like Detroit and Arizona have surfaced, among others, willing to take on ‘JVR’ but the ask has been a first-round pick as a sweetener. That’s expensive. The fact is van Riemsdyk has averaged a 27-goal pace for each of his first four seasons in Philadelphia on this deal, when factoring in the shortened seasons, so he’s lived up to his end of the bargain. The thought is the Flyers would much prefer to potentially move van Riemsdyk as a deadline rental when they can retain salary and actually get something in return for him, but they may not have that luxury." [Daily Faceoff]

After last week's trade for defenseman Tony DeAngelo at the draft, the Flyers probably shouldn't part with any more picks, no matter who they're after. Not after they shipped out seven of them in total, including all their second-rounders through 2024, and burnt through an additional $35.5 million to go from Shayne Gostisbehere and Robert Hägg to DeAngelo and Rasmus Ristolainen within one year.

Look, crazier things have ultimately happened, and while not looking great from a lot of angles, the Flyers do still have a chance at making waves, be it a Gaudreau, a Nazem Kadri, or now maybe even an Evgeni Malkin.

But again, it's only a bit better than a snowball's in hell.