Claude Giroux on return to Philly: 'They might give me a standing O, and then they might boo me'

And he wouldn't have it any other way 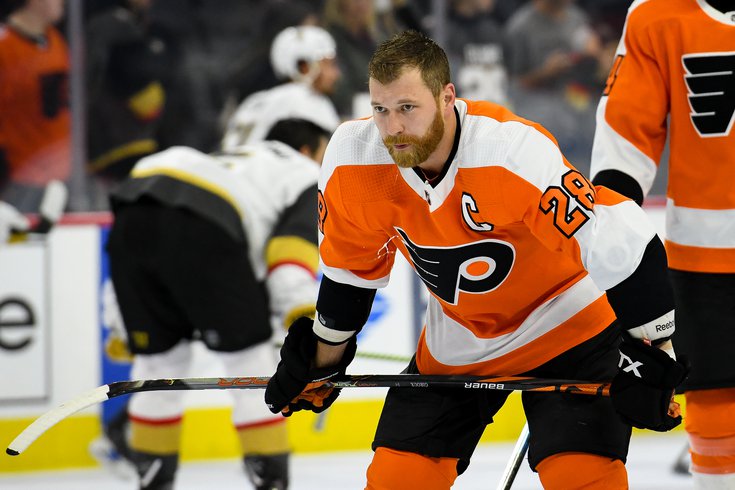 Claude Giroux during warmups before the Philadelphia Flyers game against the Vegas Golden Knights at the Wells Fargo Center in Philadelphia on October 21, 2019. (Kate Frese)

Claude Giroux said he doesn't know what to expect when he returns to the Wells Fargo Center for the first time as an opposing player, but his guess sounds about right.

"Philly fans, so they might give me a standing O, and then they might boo me," Giroux told Ottawa's Wally & Methot Show in an interview posted Tuesday. "So that's what I expect and I wouldn't ask for anything else. I mean the Flyers fans are absolutely nuts. Playing in front of them, their passion, their intensity, it's just something I can relate to.

"Yeah, they're tough on their players, but when it goes well, they're just great fans."

Giroux, 34, signed a three-year deal at the start of free agency a couple of weeks ago to join a promising Ottawa Senators team and spend the twilight of his career in the city that has long been his offseason home.

The Flyers' longest-serving captain was dealt to Florida at last season's trade deadline after 15 years with the organization and an emotional sendoff through his 1,000th NHL game.

He helped the Panthers win the Presidents' Trophy for the league's best regular-season record, but a team with Stanley Cup aspirations was out of the playoffs after a second-round sweep by Tampa Bay, and though Giroux expressed interest in returning, his stint down in Sunrise was brief and joked on the show Tuesday that the video tribute might be too.

"As long as I was there maybe," he quipped. "A quick espresso."

That's alright. He'll almost assuredly get a lot of love from the Philly crowd when the Sens visit the Flyers on Nov. 12.

Giroux touched on a number of other topics during the interview ranging from his days in junior, the early part of his pro career, lessons learned from Jaromir Jagr, his rivalry with Sidney Crosby, the blockbuster Matthew Tkachuk trade to Florida, and those disastrous 10-plus game losing streaks with the Flyers last season.

"That was tough. We had a lot of injuries," Giroux said. "We were missing maybe three or four of our top guys and we just couldn't get out of it. When you lose one, then you lose a second one and then you have that feeling that you're never gonna win a hockey game again. That was tough, probably the toughest I've had with the Flyers. We just couldn't find a win."

Now he'll be the veteran on Ottawa's young forward core of Brady Tkachuk, Drake Batherson, Josh Norris, Tim Stützle, and Alex DeBrincat, with the hopes of getting them to the playoffs for invaluable experience early on.

It's hard to win in this league. Believe him, he knows better than most.

"The only goal I can tell your right now is to build this team to be a playoff team," Giroux said. "Make the playoffs and, you know how it is, in the playoffs anything can happen. We're a young team, we need as a group to build confidence and build an identity, and having that experience going to the playoffs, I think that'll be huge for the first year."

"My second year, we went to the Stanley Cup Finals, and that was probably the worst thing for me because I thought it was gonna be easy. I thought 'Oh, I'll be back here. Not a problem.' But it's hard. It's hard to win, and sometimes you have to learn the hard way."

Check out the full Giroux interview below, starting at the 21:39 mark: