The injury bug has been inescapable 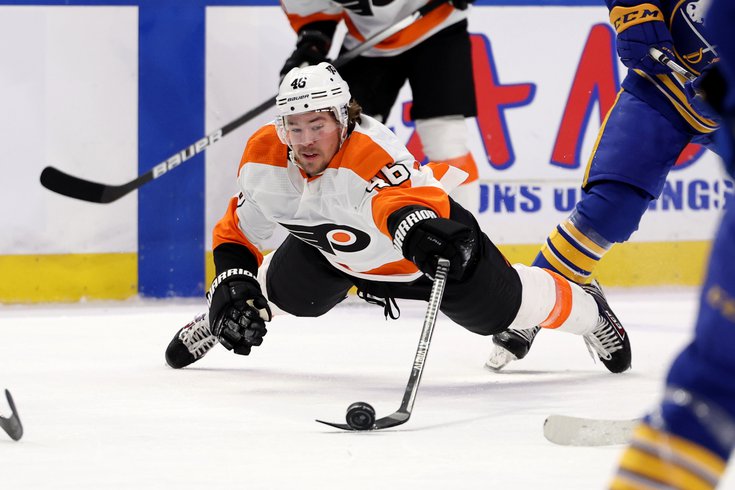 Flyers forward Bobby Brink dives for the puck against the Buffalo Sabres on April 16, 2022.

"He is expected to return to play in approximately five months."

Brink, who signed his entry-level contract and joined the Flyers after his junior season at the University of Denver, didn't participate in the team's development camp earlier this month citing an unspecified hip injury sustained earlier in the offseason. He was set to see a specialist to determine the extent of it, and now that it's known and required surgery, the Flyers are even further behind the eight ball with injured players heading into the 2022-23 season.

Joel Farabee, the 22-year old winger entering the first of a six-year, $30 million contract extension, had sudden disc replacement surgery last month after feeling a pinch in his neck while working out and veteran defenseman Ryan Ellis, who has only appeared in four games for the Flyers, is still rehabbing from that mysterious "multi-layered" core injury that general manager Chuck Fletcher still can't commit to a timetable on.

Now Brink, who had just four assists in 10 NHL games with the Flyers last season but showed promise at Denver as the nation's leading scorer, is out long-term heading into a year that's already floundering to generate much excitement.

When it rains, it pours with this team.

Brink, 21, was one of several college signings the Flyers brought in toward the end of last season so that they could begin evaluating their younger talent going forward. While not an impressive skater, the 2019 second-round draft pick has shown an offensive skill set that earned him Hobey Baker Award consideration in his final collegiate season and could make him a key piece of the Flyers' plans if he can translate it to the NHL.

But now that idea is on hold for at least several months.

The Flyers completely bottomed out last season and devastating injuries to core pieces Farabee, Sean Couturier, and Kevin Hayes were a big reason why.

Fletcher, at least, is optimistic about Couturier's and Hayes' health heading into the 2022-23 campaign, but having Farabee and Brink out from the get-go before they even hit the ice, along with Ellis' status at the top of the defensive pairings completely uncertain is far from a good spot to be in.