The injury bug followed the Flyers into the offseason, but Fletcher is hopeful of getting everyone back healthy 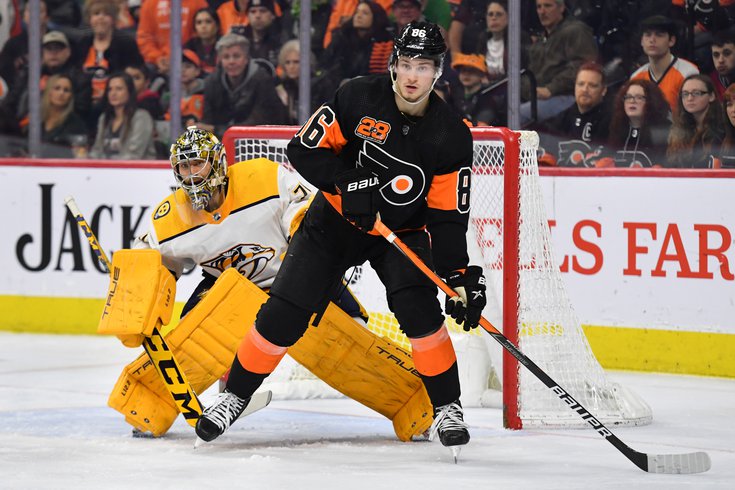 Flyers forward Joel Farabee screens Nashville goaltender Juuse Saros during their game at the Wells Fargo Center back on March 17, 2022.

At this point, injuries are the last thing Chuck Fletcher wants to hear about.

And yet a week and a half ago, the Flyers' general manager got a call about one more.

Joel Farabee had just started his run of formal workouts for the summer and while warming up with some light weights, he felt a pinching sensation in his neck.

He saw a doctor up in his hometown of Syracuse and got some imaging done, then came back down to Philadelphia last Monday to be looked at by Dr. Jon Yoon, a neurosurgeon at Penn Medicine. Four days later, the 22-year-old winger went under the knife; disc replacement surgery in his cervical region.

The official announcement by the Flyers, which was posted out of the blue last Friday, said he is expected to recover in 3-4 months.

"I'm like 'Are you kidding me?'" Fletcher said in a pre-draft press conference on Wednesday.

"I don't even know what to say. Extremely unfortunate and unlucky for him, but I think we moved as quickly as we could once we knew he had issues."

When it rains for the Flyers, it pours, even with it being two months since the season ended.

He is expected to make a full recovery in 3-4 months. pic.twitter.com/qyio463iKG

Farabee had 17 goals and 17 assists for 34 points this past season, but was limited to 63 games as he dealt with shoulder injuries throughout. He struggled to find consistency because of it, though he did put up 13 points in 15 games in the month of March once he finally started to get healthy.

In the COVID-shortened 2020-21 season the year before, his 20 goals through 55 games led the team in scoring, and as the 14th overall pick in the 2018 draft, Farabee's promise and development will be key to whatever the Flyers become going forward.

Neither Fletcher nor assistant GM Brent Flahr wanted to commit to a timetable for Farabee's return. The start of training camp, even the start of the season is going to be a tight deadline to meet. Fletcher said he's prioritizing, as he has with other injuries in the past, getting Farabee back fully healed, stronger too.

"I'm not 100 percent sure yet how quickly he can get into getting stronger and really working on not just his upper body but his lower body as well and building some strength to help him become a little bit more durable," Fletcher said. "He plays hard, he's a fearless kid, and this is gonna be a big summer for him from a strength and development scenario.

"That's certainly an important part of the rehab. It's not just getting him healthy but how can we get him stronger. So for me, whether it's three months or four months, at the end of the day, if he's ready for Game 1, great. If he misses five, six, seven games and we can push him a little bit further, that might make sense too... We'll make every decision with him based on his long-term health, welfare, and development."

The issue in Farabee's neck wasn't linked to anything in his shoulder either. It sprung up pretty suddenly.

"Even talking to Joel this morning, he was just saying the first time when he started working out with his shoulder, everything felt 100 percent," Flahr said. "He felt great, and then it just happened."

The disc-replacement surgery Farabee received is similar to the procedure Jack Eichel underwent after his trade to Vegas in November and then Chicago's Tyler Johnson soon after. The surgery was uncharted territory for hockey players before then and was understandably met with concern. However, both Eichel and Johnson made successful returns to the ice this year, which was a point of ease for the Flyers, Farabee's family, and his representation that this would be safe.

"We obviously consulted with more than one doctor," Fletcher said. "We got multiple opinions and everybody thought that this was the best approach. So again, for Dr. Yoon to see him on a Monday, recommend the surgery and you had it on Friday, it was a high degree of cooperation, a lot of communication with everybody, and we all felt this was the best way to go not just in the short term of getting him back as a player but for his long-term health as well.

"It's incredible and there's still only three players that have had it, but my expectation is that this will become a little bit more commonplace as we move forward."

Now hopefully that's the end of the bad news.

Ryan Ellis is making progress in his rehab from that still mysterious "multi-layered" lower-body injury that kept him out all but four games this season, but Fletcher still doesn't think the team can commit to any sort of timeframe for his return.

"He's certainly further along now than he was a month ago or two months ago," Fletcher said, but the Flyers are taking things one step at a time with the defenseman's recovery and should know if training camp is a possibility for him in the next month.

"The good news is Sean Couturier is doing great, he's doing all his summer training, feels very good," Fletcher added as he knocked on a desk that's hopefully made of wood. "Same with Kevin Hayes. But hopefully there's no more surprises this summer in a negative sense like a got a week and a half ago when I got a call that Joel Farabee had had numbness and pain in his neck, and could be pretty bad.

"Hopefully there's no more of those, but if there are, we'll just react. That's what we do. We'll have to work around it and we'll have the ability to hopefully improve our roster. But clearly getting guys back to full health and some young players improving has to be a big part of this too. We can't just continually go to market and build a team, we need to get some guys back and get some kids to step up."