The 25-year-old recently signed a contract with Philly. He played in the Olympics and was a star on the KHL team that won the championship last season 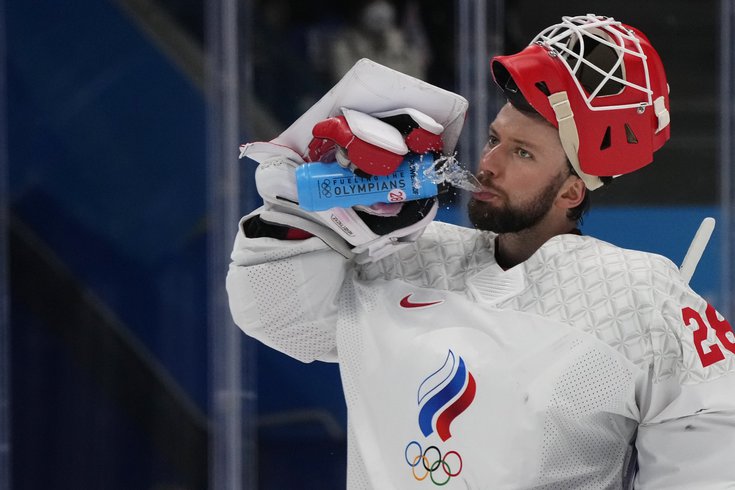 Russian officials detained Flyers prospect Ivan Fedotov on Friday because he's suspected evading the army, they say. Fedotov is pictured above during a game with Russian Olympic Committee team in the 2022 Winter Olympics in Beijing.

A professional hockey player from Russia, who signed a contract with the Philadelphia Flyers last month, has been detained in his home country and forced to enlist in the Russian army, according to multiple reports Friday.

Ivan Fedotov, who plays goalie, was a late-round draft pick by the Flyers in 2015. On May 7, the team announced Fedotov, now 25 years old, had signed a one-year contract with the Flyers, and there has been speculation since that he could compete for the backup goalie job behind starter Carter Hart.

Among the first international reports to emerge about Fedotov's detainment said he was being held in St. Petersburg on allegations of "dodging the Russian Army." By Friday afternoon, several reports stated stated Fedotov had been taken to an army recruitment center and forced to enlist. Russian-language media site Fontanka.ru is being cited as the source of the information.

The Russian army invaded Ukraine in late February and a bloody conflict has been waged ever since.

Friday afternoon, Flyers general manager Chuck Fletcher released a brief statement about Fedotov: "We're aware of the reports and are investigating the situation. We have no further comment at this time."

An NHL spokesperson released a similar statement, acknowledging the situation in Russia and declining to discuss it further.

Based on information from Fontanka.ru, Yahoo News reported Fedotov was met by Russian officials as he exited an ice arena in St. Petersburg and "invited" to go to the army enlistment office. Newsweek wrote that the Russian military prosecutor's office told Fontanka.ru that "There are sufficient grounds to consider Fedotov an army evader."

Fedotov has played professionally in his home country since 2014 and was on the Russian Olympic Committee team in 2022 that won the silver medal at the Beijing Winter Olympics.

He signed an entry-level, one-year contract with the Flyers for $925,000 on May 7 after he was first drafted by Philadelphia in 2015. He was their seventh round pick and 188th pick overall.

The goalie is also accused of illegally terminating his contract with HC CSKA, a professional hockey team in Moscow, after he announced in an interview in April that he was leaving for the Flyers.

Since the club is run by the Russian Defense Ministry, he was already technically considered enlisted, Fontanka.ru reports.

Fedotov helped CSKA win the KHL's Gargarin Cup last season and won the league's top goalie award. He posted a .919 save percentage and allowed exactly 2 goals per game. He boosted his save percentage to .937 during the playoffs and .943 during his Olympic run.

Getting Fedotov out of Russia and to Philadelphia became more complicated after the invasion of Ukraine, Fletcher, the Flyers' GM, said.

​​"But we're still expecting that we'll be able to get him the proper paperwork and have him here for next season," he said in May.

Fletcher was optimistic Fedotov would be the back-up goalie for starter Carter Hart.

"In terms of ability, we think he's ready to challenge for an important role," Fletcher said. "He's right at that age where he's put his time in. He's developed, and he's ready to go."

But playing in the NHL would still be a big adjustment.

"In the NHL, there's a lot more traffic at the net. A lot more throwing pucks at the net and jamming the net," Fletcher said. "There's certainly things that goalies have to adapt to and some do it quicker than others."

Fedotov is 6-foot-7 and 203 pounds. He considers St. Petersburg his hometown, but Fedotov was born in Finland near the Russian border and has maternal Finnish ancestry.

Prior to the war between Russia and Ukraine, many Russian NHL players returned home in the offseasons, but because of concerns that they wouldn't be able to get back to the U.S. or Canada due to the war many remained in North America this summer, the Athletic reported.

The conflict has put the NHL in a tough position. While the league condemned the invasion, it has not barred Russian players and doesn't want them to be uncomfortable in North America or put in positions where their families may be in danger, according to the Athletic.

The NHL did create a rule prohibiting NHL players from traveling to Russia with the Stanley Cup to celebrate.

Though much different circumstances, Fedotov is the second athlete connected to a U.S. professional sports league to be held in Russia since that President Vladimir Putin ordered the invasion of Ukraine. WNBA star Brittney Griner has been detained in Russia for more than four months.

Griner, who plays for the Phoenix Mercury, also has played for years for UMMC Ekaterinburg in Russia during the WNBA offseason. She was detained after flying from New York to Russia, days before the Russian military invaded Ukraine. Russian authorities have charged her with drug smuggling offenses, alleging Griner had two cannabis vape cartridges in her luggage when she arrived at an airport near Moscow.

Griner was in a Russian courtroom on Friday. U.S. officials believe the Putin regime ordered her arrest to use her as a bargaining chip – a practice known as 'hostage diplomacy.'