NHL Draft: Uncertainty for the Flyers at No. 5 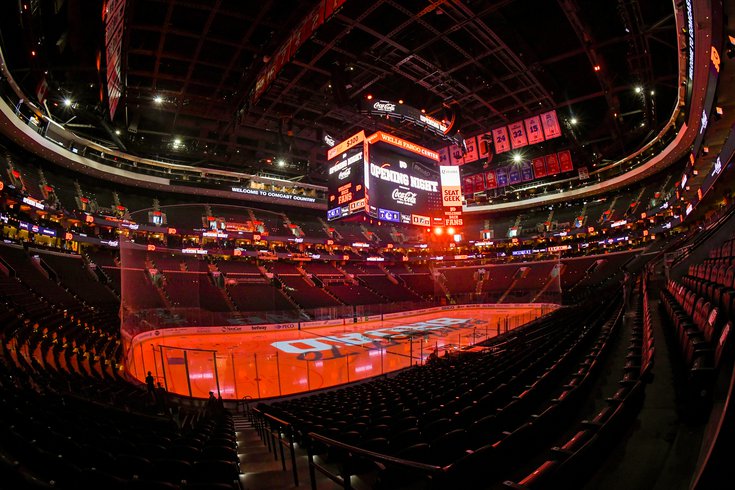 PHILADELPHIA, PA - OCTOBER 15, 2021: A view of the Wells Fargo Center before the Flyers' home opener against Vancouver.

The NHL Draft is a week from now, but what the Flyers will do with the fifth overall pick still isn't clear.

Is there a specific position they're favoring?

"We could use everything," general manager Chuck Fletcher added. "We could use a center, wing, a defenseman."

Fair point. Do they expect whoever they take to be NHL ready?

"Depends on the player, to be honest with you," Fletcher said. "Some players are physically more ready than others. There are a couple more kids that need more time to get stronger. Some have played at a little higher level. That will be up to them. Some of these kids should be ready to practice and play potentially within the year"

Okay...are they looking at trading the pick?

"Well, if we’re going to trade the pick outright, it needs to be for a player in a certain age group. A player that could help us win now, but also win for several years," Fletcher said. "I do not think we are looking for someone in their late 20’s or early 30’s. Certainly speaking to every team in the league, we say this every year, but it’s definitely true this year, trying to ascertain that value of that pick is. If somebody has designs on it and makes a fair offer, we have to consider everything."

Yeah, this draft is looking like a total crapshoot. Beyond the consensus No. 1 Shane Wright, who might not be a complete lock to Montreal either, anything can happen and anyone could be available for the Flyers at No. 5.

"In reality, there’s obviously a group of players, that a lot of you guys are aware of," Flahr said. "We have some guys higher than others. We are at the mercy of the teams in front of us a little bit, but we have a couple of players targeted that we’re hopeful are there at five. If that’s the case then we’ll make that decision."

And they'll have their options.

The 2022 draft class has been repeatedly advertised as one of the weaker ones in recent memory — "uncertain" was the word mostly used to describe it on Wednesday. There's no surefire lock in the way of a Connor McDavid, Auston Matthews, or Nathan MacKinnon, but that doesn't mean it's completely devoid of talent either.

There are just a lot of ways the top five picks can play out.

Slovak prospect Juraj Slafkovsky's stock has gone way up recently with strong performances at the Winter Olympics and IIHF Worlds, the USNDP's Logan Cooley and the WHL's Matthew Savoie are two centers who have flashed dynamic playmaking abilities that the Flyers sure could use if they can translate to the pros, Boston College commit Cutter Gauthier is a big center who has also been on the rise, and David Jiricek and Simon Nemec have dominated the conversation as the draft class' top defensemen.

Fletcher and Flahr didn't want to get into the details of any one specific prospect — as Flahr said, they're not going to show their hand, and what they do at No. 5 ultimately depends on what Montreal (1), New Jersey (2),  Arizona (3), and Seattle (4) do in front of them — and they're not looking for a player who fits any particular mold. High-end talent is the priority here.

"I still think you got to make sure you get high-end talent," Fletcher said. "High-end talent as we just saw in the playoffs, you look at Tampa and Colorado. They have a lot of high-end talent that is packaged in, often times, in a big or competitive or speedy frame.

"I think we’re certainly like everybody wanting to get the most competitive players we can get, but you can’t forsake talent. You have to make sure you're getting talent and where we’re picking, you should be able to find competitive people that have talent."

Here are the top-five ranked North American and European skaters, according to NHL Central Scouting, any of which could be there for the Flyers to take in Round 1 of the draft next Thursday night in Montreal, provided they stay at No. 5, that is:

"We have a couple of layers of players, a certain amount of guys that we’re comfortable with where we’re at," Flahr said. "Then another layer maybe if we move back a couple of spots...At the draft table, if it goes a certain way and we can move back and gain assets and still get a player that we have rated, then we’ll potentially do that. But you’re going to see more action as we get closer to the draft and get more information on what teams are doing or are looking to do."

And here are the Flyers' six total draft picks and where they lie in the overall order:

Finally, for historical comparison, here are the Flyers' first-round picks from the past decade under GMs Paul Holmgren (2006-2014), Ron Hextall (2014-2018), and Fletcher (2018-present) along with their current playing statuses.

*2021 1st-rd. pick was sent to Buffalo in trade for Rasmus Ristolainen

The NHL Draft's first round will be held next Thursday at 7 p.m. Rounds 2-7 will be completed the next day beginning at 11 a.m.