Commuters have not been able to use the stop since 1979, when it was closed due to lower ridership 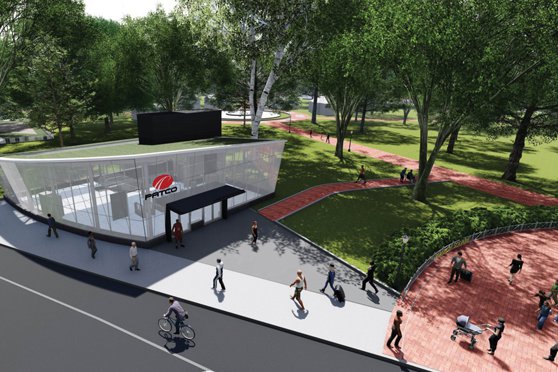 PATCO expects its rehabilitation of the Franklin Square station at Race and Seventh streets in Philadelphia to be complete by April 2024. It was last open in 1979, when it was closed due to low ridership. Above, a rendering of the station's new headhouse.

PATCO is bringing its ghost station below Franklin Square back from the dead.

Construction work is ramping up on the $30 million project, which is expected to be completed in April 2024. PATCO officials have said reopening the long-shuttered Philadelphia station will improve access to Independence Mall and Old City.

Crews are currently looking for a waterline that runs below the square, which has caused the closure of one lane on Seventh Street, WHYY reported. This work will continue through August. A new headhouse then will be constructed on the corner of Seventh and Race streets while the station's concourse is renovated.

Before the COVID-19 pandemic, PATCO officials estimated 1,500 people would use the station every day. But one study found many of those users wouldn't be new riders. A large share would be commuters who currently use the 8th and Market station.

When PATCO first began planning the rehabilitation, officials said the station would remain open regardless of ridership because the project is meant to spur economic development in the neighborhood.

This is one reason it was a pet project of former labor leader John Dougherty, who served on the Delaware River Port Authority board of commissioners. Doughtery was convicted on corruption charges last year.

Dougherty, who perceived the DRPA to favor New Jersey projects, viewed it as a good investment for Philadelphia.

Additionally, the Philadelphia Office of Transportation and Infrastructure have discussed extending the PATCO Speedline to 22nd Street in Center City and the 40th Street Trolley Portal in West Philly. The line currently ends at 16th and Locust streets.

The extension would provide better connections between South Jersey and the universities and health systems in University City.

It also would give PATCO riders a place to transfer to SEPTA's Airport Line. At present, they have to make two transfers at 15th Street and 30th Street.