Beginning today, PhillyVoice is partnering with Nor'Easter Nick to provide weekend forecasts for the city and South Jersey every Thursday 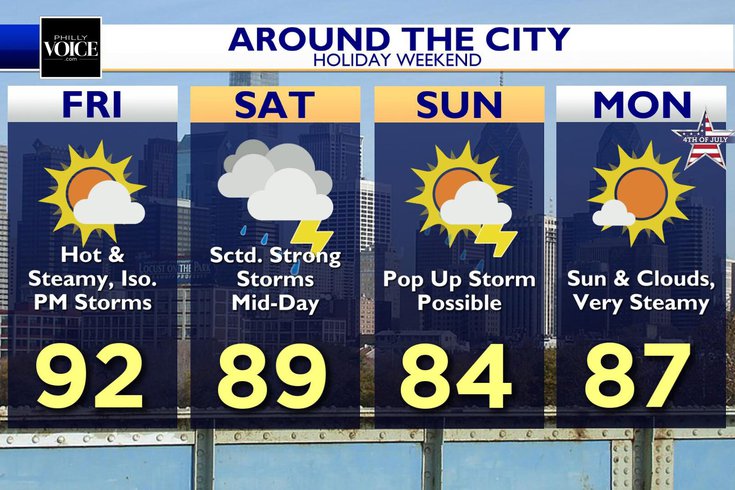 The weather in Philly and at the Jersey Shore for July Fourth weekend is mostly good news. Most of the weekend will be dry in both areas, but there will be some isolated showers and storms, especially Friday and Saturday.

Big holiday weekend on tap for Philadelphia and the Jersey Shore, and like every summer holiday, it is very weather dependent. There's good news and bad news in the forecast.

The good news: The weather for most of July Fourth weekend will be dry in Philly and at the shore. It'll be hot and humid, especially Friday, and become uncomfortable for many as the dew points rise into the 70s.

Here's the bad news: There is a chance of storms. Some isolated "popcorn" storms are possible Friday afternoon and then again on Saturday.

These storms could start popping on radar after 3 p.m. Friday and then again early- to mid-afternoon Saturday. The Storm Prediction Center has outlined areas generally north of the city in a "slight risk" of severe weather, which means any storms that form have the potential to be strong. The primary concern is heavy rain due to the humidity.

As for a prediction of how many hours of the Independence Day weekend could include rain – maybe six.

Friday is good – watch for isolated p.m. storms. A good chunk of Saturday will be mostly sunny – the best chance of rain is later in the day, after a brief morning downpour. Then Sunday afternoon and Monday there will be plenty of sunshine.

The relief will be seen at the shore. Sea breezes kick in each day this weekend and keep the temperatures down in the lower 80s. It will feel even more humid on the beach because of the cooler temps.

Be weather aware, keep an eye to the sky for those thunderstorms and be safe. Have an umbrella handy, but don't worry about a wash of a weekend! Watch the video below for more details about the weather during Fourth of July weekend. And scroll further for the day-by-day, at-a-glance forecasts in Philadelphia and at the Jersey Shore.

• FRIDAY: Partly sunny skies, brightest in the morning. Pop-up showers and storms in the afternoon. High temperatures in the lower 90s. Chance of rain after lunch about 45%. Showers should be brief. Very sticky with high humidity.

• SATURDAY: Mix of sun and clouds. Highs around 90, and becoming cloudier in mid- and late-afternoon. Chance of scattered storms, with the potential for downpours, mainly after 12 p.m. Chance of rain 60%.

• SUNDAY: Front lingers and morning could start off cloudy. Then, partly to mainly sunny in the afternoon with an isolated shower or storm. Highs around 84 in the city. Chance of rain 30%.

• FRIDAY: Skies start out sunny with clouds likely building by late morning. Sea breeze kicks in and keeps any showers and storms west of the the Garden State Parkway. Highs in the lower 80s. Chance of rain after 3 p.m. is 40%.

• SATURDAY: The day starts with some isolated rumbles of thunder and a downpour or two. Most of the day will be dry, but scattered storms will pop by midday. High around 82 on the sand. Chance of rain 60%, but not an all-day washout.

• SUNDAY: As the cold front refuses to progress all the way through the region, it could be cloudy at the shore in the morning with a chance of a shower. High temperatures top out around 79. Chance of rain about 20%.

• MONDAY: Dew points and air temperatures will be close to one another. This means high humidity and the chance of fog. The fog will burns off leaving partly to mainly sunny skies. Temps reaching the low to middle 80s. Chance of rain less than 10%.