By Franki Rudnesky
PhillyVoice Staff
Holiday Fourth of July
from 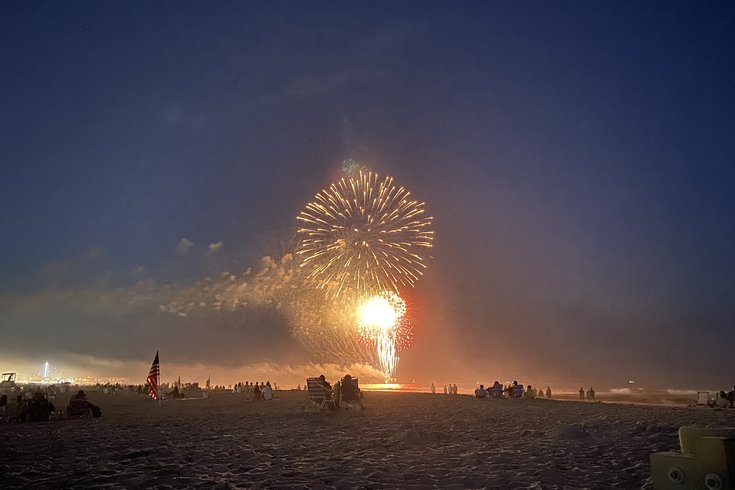 Ocean City, along with many other southern Jersey Shore towns are hosting family-friendly fireworks and celebratory Fourth of July events this holiday weekend.

For those fleeing the city to head down the shore this Fourth of July weekend, there are plenty of options to see fireworks light up the sky, attend parades, and enjoy patriotic events for people of all ages.

Take a trip down the Jersey Shore with us as we round up event highlights for Independence Day.

Atlantic City – There are two opportunities over the holiday weekend to view fireworks in Atlantic City. The North Beach Fireworks take place on Friday, July 1 at 9:30 p.m. and can be viewed from Hard Rock, Ocean Casino, Resorts, Showboat, Steel Pier, or from restaurants on Tennessee Ave. Tropicana's fireworks show takes place on Monday, July 4 at 10 p.m. and can be seen all along the beach and boardwalk.

Margate City – The Margate Mothers' Association is hosting its annual Fourth of July fireworks show on Monday, July 4, at 9 p.m. on the beach at Huntington Avenue.

On July 4, two bike parades start at 10 a.m. from opposite ends of the island. Registration for the South End Bike Parade begins at 9 a.m. at 40th St. & Asbury Ave., and registration for the Gardens Civic Association Bike Parade begins at 9 a.m. at the foot of the Ocean City/Longport toll bridge. Patriotic garb and decor are recommended for both parades, which are free to enter.

A Fourth of July Skate Bash featuring a DJ, snacks, giveaways, and a costume contest is being held on July 4 from 5:30 to 8:30 p.m. in the skateboard park at Fifth St. & Asbury Ave. The holiday weekend finishes up with a kite-flying contest at 7 p.m. by the Ninth St. Music Pier, and the grand finale fireworks display will be launched from a barge by Ninth St. at 9 p.m.

Stone Harbor – Stone Harbor Recreation hosts its annual Fourth of July races and contests on Monday, July 4, from 9 a.m. to 1 p.m. with a packed schedule of events happening near the Stone Harbor Recreation Center. Highlights include a sand sculpting contest, foot races, a Phillies Home Run Derby, and a decorated bike contest. The town's fireworks display takes place on July 4 at 9 p.m., and can be viewed from any beachfront area in Stone Harbor.

Wildwood – In Wildwood, there are multiple parades and a fireworks show sure to excite visitors. The North Wildwood Independence Day Family Parade takes place on Monday, July 4 at 9 a.m., with registration from 8:15 to 8:45 a.m. at Ninth & Atlantic Avenues. Also happening that morning at 9 a.m. is the 18th Annual Pooch Parade, with registration from 8 to 8:45 a.m. at Bill Henfey Park.

Later that evening at 7:30, the free Wildwood Crest Summer Music Series special Fourth of July show featuring the band Don't Call Me Francis takes place in Centennial Park, at Fern Road & Ocean Avenue. The Fourth of July Fireworks Spectacular on the Boardwalk will be launched from Pine Avenue on July 4 at 10 p.m., and can be seen from anywhere on the Wildwood Boardwalk.

Cape May – Cape May's Independence Day Parade travels down Beach Avenue on Saturday, July 2 at 1 p.m., and consists of string bands, performing groups, veteran organizations, and decorated vehicles. The Independence Day Fireworks take place on Monday, July 4 at 9 p.m. in front of Congress Hall, and can be seen along the beach from the Convention Hall all the way past Congress Hall beach.

So, no matter which of these South Jersey beach towns you're headed to for the Fourth of July, it promises to be a fun-filled weekend for the whole family.