American martens, part of the weasel family, may be reintroduced in Pennsylvania 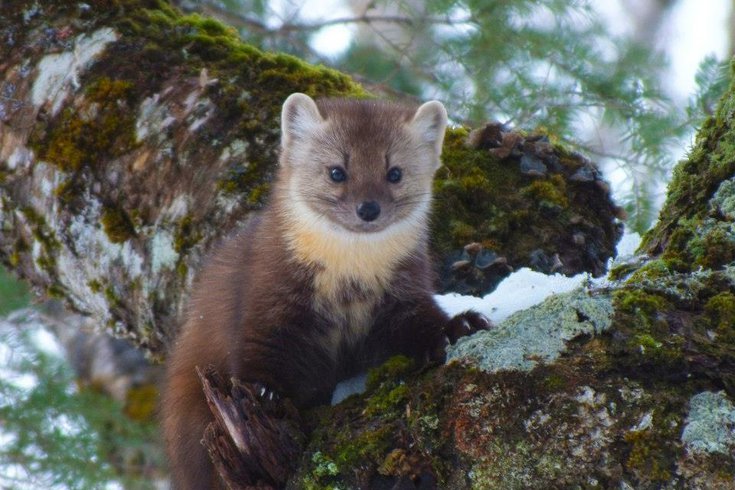 The American marten has long been extirpated in Pennsylvania, but the game commission's Bureau of Wildlife Management is seeking approval to restore populations of the small mammal in the weasel family.

The American marten, a small weasel similar to the mink and fisher, may be the subject of a reintroduction effort in Pennsylvania if the game commission's board authorizes a plan requested by the Bureau of Wildlife Management.

Also known as pine marten, the slender mammal was extirpated in Pennsylvania by the early 20th century due to unregulated harvest in the fur trade and deforestation. The marten's soft, dense fur ranges seasonally from yellow to dark brown and is set apart from similar species by an orange or blonde patch of fur near the throat.

In contrast to mink, which spends most of its time near streams and coastal areas, martens spend more of their time in upland habitats. The males tend to be larger than the females, but they generally range from 1.5-2.2 feet in length and have bushy tails. They feed on a range of amphibians, reptiles, insects, birds and small mammals. Their predators include hawks, owls, bobcats and even the related fisher.

A feasibility study conducted by the Bureau of Wildlife Management will be reviewed in Harrisburg by the game commission board on July 9.

The study looked at current habitat suitability, future climatic impacts, interactions with other species and public opinion about American marten. The bureau concluded that a reintroduction would likely be successful and "would be an appropriate next step" in the commission's species restoration efforts.

American martens (Martes americana, of the family Mustelidae) are prevalent in Canada and parts of the Northeast and Midwest U.S., but are considered endangered/extirpated in Pennsylvania, New Jersey, Ohio, Maryland, Massachusetts, West Virginia and Illinois. Their populations have returned in Vermont, where a recovery plan was adopted in the 1990s, but wildlife officials there are still assessing various factors which may have enabled their reappearance, as well as ongoing challenges to conservation, according to the state's Fish & Wildlife Department. In other settings, the species has been reintroduced in territories native to its close relative, the Pacific Marten.

Martens are sometimes incidentally trapped by hunters targeting fishers, which are much more widespread in the northern U.S., and are particularly threatened by logging of old-growth forests.

This is not the first time the Pennsylvania Game Commission has considered an American marten reintroduction. Another feasibility study was completed in 1996, laying the groundwork for a future initiative.

The Pennsylvania Game Commission's most successful species reintroduction over the last several decades has been the bald eagle restoration project, which has increased the population from just a few adult pairs in the early 1980s to 300 or more today. Other successful reintroduction plans in the state have included fur-bearing mammals such as river otter, fisher, beaver and bobcat.

The Bureau of Wildlife Management has requested authorization from the game commission board to approve the concept of American marten reintroduction and direct staff to put a plan in motion.