The Hessels' Hairback has been threatened by the loss of its sole food source, the Atlantic white cedar 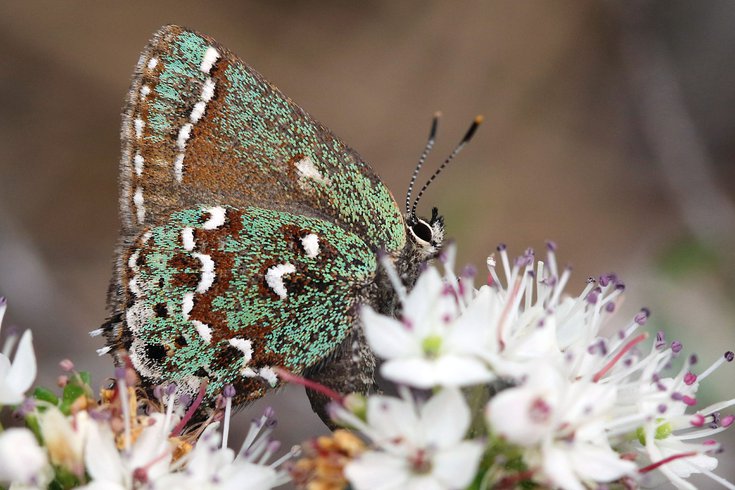 For the first time in nearly three decades, the threatened Hessels' Hairstreak butterfly has been spotted on the Delmarva Peninsula in southern Delaware.

A Hessels' Hairstreak butterfly has been spotted on the Delmarva Peninsula in Delaware for the first time in 27 years.

The Nature Conservancy reported the species, Mitoura hesseli, was found on one of its properties in southern Delaware during a surveying project this spring. The butterfly, which is considered endangered in Delaware, has unique habitat needs that have threatened its survival along the Atlantic Coast.

The tiny butterfly has a wingspan of just one inch and has green, black and white markings on its wings. As caterpillars, the species feeds on Atlantic white cedar trees, which have been depleted by logging and deer populations that eat the tree's seedlings. The species tends to spend most of its time near the tops of these trees, which can reach more than 100 feet. The butterflies consume nectar from a range of flowers including swamp milkweed, sand myrtle, sweet pepperbush and highbush blueberry, among others.

The sighting in Delaware was confirmed by Delaware State University entomologist Christopher "Kitt" Heckscher, who partners with The Nature Conservancy as a surveyor.

"I consider it one of the region's most important Lepidoptera conservation targets," Heckscher said. "It would be the only known population between New Jersey and southeastern Virginia. I was lucky enough to be among the group that spotted this butterfly 27 years ago. It's a long time between sightings but encouraging to see it again."

The species is still known to occur widely in the New Jersey Pine Barrens, but in Delaware its status is listed as "possibly extirpated," according to the biodiversity encyclopedia NatureServe Explorer. The Hessels' Hairback is considered vulnerable, at best, in most of its territories.

"In New Jersey, cedar swamps always have been, and still are, destroyed by wildfire, but in the past when deer populations were smaller they regenerated readily from seed," the encyclopedia says. "Much habitat has been lost along Delaware Bay and more is every year to sea level rise and resultant salt water intrusion."

The New Jersey Pine Barrens have had two large wildfires in June – one at Wharton State Forest in Hammonton and a second at Brendan T. Byrne Forest in Manchester Township. Both fires have been contained, but more than 13,000 acres were burned. The two forests are known for their Atlantic white cedar populations, and last year the U.S. Department of Environmental Protection announced plans to embark on a 10,000-acre restoration of the tree species beginning later this year at Wharton State Forest.

Atlantic cedar wood historically has been used for shipbuilding, and remains popular for certain elements of home construction. The species is considered extirpated in Pennsylvania.

Rick Mikula, better known as The Butterfly Guy in Hazelton, Luzerne County, said Tuesday that there were several reported sightings of Hessels' Hairstreak in New Jersey this spring.

"Their next flight period will be in July," Mikula said. "They are beautiful works of art with their double tails, but unfortunately because of their size they often go unnoticed. They prefer cedar swamps to visiting gardens as Atlantic white cedar is their only known host plant."

The Nature Conservancy did not disclose the location of the Hessels' Hairstreak butterfly sighting in order to protect the species. Emily Knearl, a spokesperson for the Virginia-based nonprofit, said the discovery is a positive step for conservation and proof that nature preserves restore habitats for threatened wildlife.

"Finding this butterfly was so exciting," Knearl said. "In talking to our naturalist folks, it provides a link in the chain between states that are above us and states that are below us. And it does show that we still do have a population in Delaware."

Knearl added that the sighting this spring means the nature preserve has more of the Hessels' Hairstreak.

"Since they tend to spend their time at the tops of these trees, there could be many more," Knearl said. "It's just that they are very hard to find and they are very rare to spot."