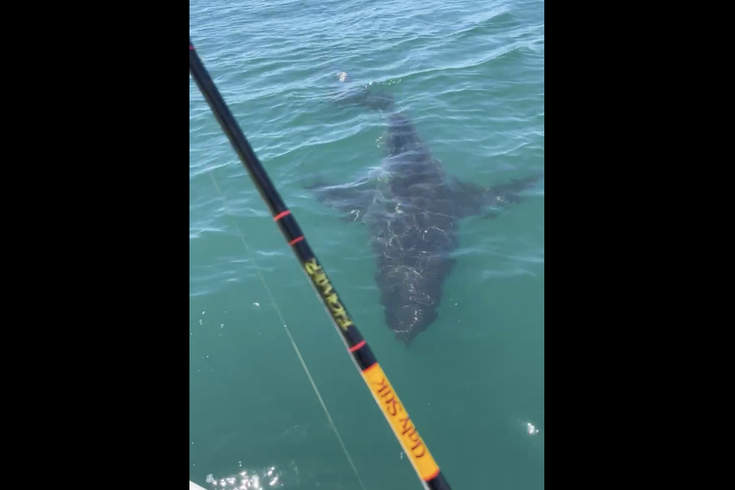 A great white shark was spotted Saturday off the coast of Sea Isle, New Jersey by a group of fishermen returning to Townsend's Inlet. Jim Piazza, the owner of the boat, said the shark looked to be at least 12 feet long.

A massive great white shark was spotted Saturday afternoon by a group of fishermen off the coast of Sea Isle City at the Jersey Shore. Videos taken by one of the men show the shark calmly circling and approaching the boat.

Jim Piazza went fishing with his cousin, his son and one of his son's friends early Saturday morning on Piazza's new boat. They were around the first mile marker north of Townsend's Inlet and were half a mile or so off the coast around noon when they saw the shark in the water.

"We were on our way back in, and oddly enough, my son spotted the shark," Piazza said Monday. "We almost ran it over. We turned back around and just circled it for the next 10 minutes."

Piazza shared a pair of videos of the shark on Facebook, where the U.S. Coast Guard Station Cape May also shared the footage.

Piazza said his boat is 23 feet long and the shark easily was half the length of the boat.

"It was definitely more than half the size of the boat, up next to it in person," Piazza said. "It doesn't really look like it in the video, but that didn't do it justice. The size of that shark was nuts."

Piazza isn't sure whether the shark was a male or a female. Some people who viewed the video suggested it might be a female.

"It was pretty docile. It was swimming north toward Ocean City area, but it was really just mellow and swimming along its little path," Piazza said. "When we pulled up to it, it kind of did a couple of little loops, but it was still curious, so it was kind of swimming up to us still. Thank God it didn't bite the boat, obviously, or try to bite at anything."

Great white sharks annually migrate north during the summer to feed near Nova Scotia, typically to bulk up again after mating season in the southern Atlantic. It's not uncommon for them to swim off the coast of New Jersey, and shark populations have been recovering on the East Coast after four decades of decline, mostly caused by overfishing.

Several hundred great white sharks have been tracked over the years by OCEARCH, the world's leading shark research outfit that uses a data-centric approach to monitoring the animal's behavior. In late April, the organization got a ping from a geolocation tag on Ironbound, a 12-foot 4-inch shark observed traveling north off the coast of New Jersey.

"I didn't see any tags on it," Piazza said. "It was pretty crazy to even be a great white. I've seen blacktip sharks out there before, smaller blacktips, but nothing on the scale of this."

Piazza, a father of five, owns businesses that specialize in tree removal, crane services and hardscape and landscape masonry. His shop is based in Aston, Delaware County, and his businesses do a lot of work in Chester County. He's been fishing every weekend at the shore since he got his first boat and said he's regularly jetskied around Townsend's Inlet in the past.

"It's a little scary, since I've fallen off a couple times right there, ha!" Piazza said.

Shark bites among humans are rare and most species show little interest in attacking people without provocation, though some are more aggressive than others. They tend to be more disturbed by crowds than by isolated people or boats.

“They generally just ignore people," Gavin Naylor, director of the Florida Program for Shark Research, told BBC in 2019. "I think if people knew how frequently they were in water with sharks, they would probably be surprised.”