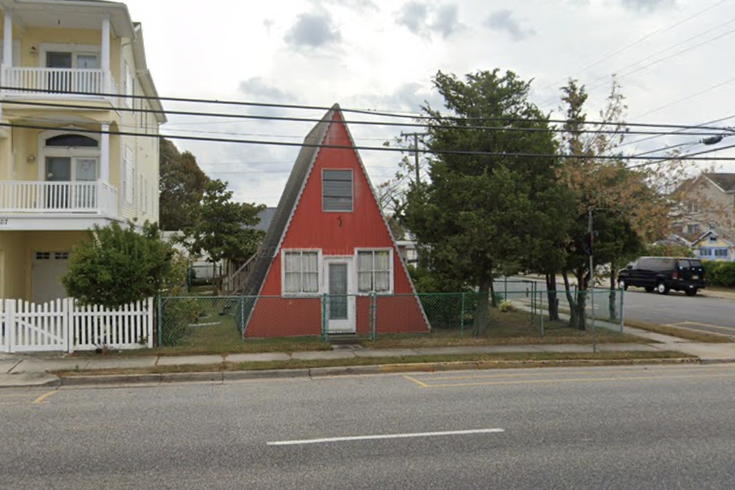 The A-frame style home pictured above was built at 207 Bennett Ave. in Wildwood around 1960. The property will be moved and preserved to avoid demolition with condos now planned at the site.

A classic tiny A-frame house that stands apart from surrounding architecture in Wildwood will soon be moved to Upper Township after local preservationists successfully campaigned to save the unique red structure.

The triangular property at Park Boulevard and Bennett Avenue, sometimes called the "pizza house," is an example of a popular 20th century vacation home design that could be purchased and cheaply built from a prefabricated kit. The style was most popular from the 1950s through the 1970s, offering families with disposable income a frugal way to build a home away from home.

The A-frame in Wildwood was constructed in 1961 by Glenn Dye, a resident and car dealer who built the property as a clubhouse to accommodate hobby groups. Dye never lived in the property, which has no electricity or plumbing and functions more as a two-room shed than a home. For years, it has existed mainly as a curious conversation piece in the Jersey Shore town. Dye passed away in 2003.

When the property was put up for sale last year for $175,000, the initial idea was that it could be used as a vacation rental if some renovations were done to make it suitable to stay there. Ultimately, it was purchased as a development opportunity and condos are now planned at the site, the Courier-Post reported.

In order to prevent the building's demolition, local group Preserving the Wildwoods teamed up with Blue Homes Real Estate to find a solution. The goal was to find someone to take ownership of the property at no charge and then pay to have it relocated.

The best proposal came from Ed Bixby, a real estate broker and owner of Steelmantown Green Burial Preserve, an environmentally conscious cemetery in Cape May County. Bixby plans to move the A-frame home to a horse farm in Upper Township, where it'll be kept pending a decision on how best to use it. The property could be become a caretakers' cottage at Bixby's cemetery or put on a barge for use as a rental cottage, the Press of Atlantic City reported.

It's also not out of the question that a new location in Wildwood is found, if there is support and funding to make it happen.

A GoFundMe page for the preservation of the building has raised just over $1,000 to help Bixby with the cost of moving the A-frame home. Bixby is prepared to pay for most of the expense.

The home is expected to be moved Tuesday by Pleasantville-based S.J. Hauck, which will carefully break the property down and reassemble it at the farm.