Built in the late 1930s, the building endures as a Jersey Shore relic 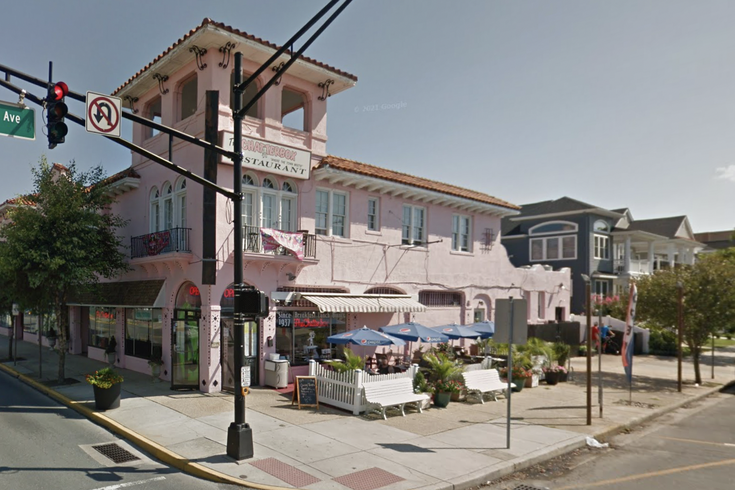 The Chatterbox, at the corner of East Ninth Street and Central Avenue in Ocean City, has been a Jersey Shore landmark for decades. The restaurant has been purchased by the Philadelphia group behind Green Eggs Café.

The Chatterbox, a prominent landmark in Ocean City, has been acquired by the owners of the Philadelphia brunch restaurants Green Eggs Café. The striking pink building at the corner of East Ninth Street and Central Avenue, just a few blocks from the main bridge leading into the shore town, will be reopened as a new concept still to be determined.

Founded in 1937, The Chatterbox restaurant was originally led by Jean Campbell, whose family-style restaurant helped set a tone as a meeting place in Ocean City's business district for decades to come.

The restaurant relocated to the pink storefront on Ninth Street from an initial location in 1940. The distinctive building was designed by Ocean City native Vivian Smith, the architect behind other local landmarks including City Hall, the historic Flanders Hotel and the Music Pier on the Boardwalk.

An investment group led by Bill Bonforte has purchased the property for an undisclosed price, the Press of Atlantic City reported Tuesday. It had been listed at $2.895 million earlier this year.

Bonforte co-owns Green Eggs Café, which has five locations in Philadelphia, with Stephen Slaughter and Andrew Zuccarini. Green Eggs Café opened its first restaurant in 2010. It had a brief run in North Wildwood when it opened as a pop-up inside Keenan's Irish Pub in 2017.

Bonforte told the newspaper that he has no plans to change the exterior of The Chatterbox and intends to keep the "Since 1937" sign that harkens to an bygone era at the Jersey Shore. Whatever the new owners decide to do with the space, its name will remain "at the Chatterbox" to keep the building's history alive.

"I think in everybody's heart that building will always be the Chatterbox," Bonforte said.

Over the years, The Chatterbox has passed through different owners who put their own spin on the original concept. The Repici family led the restaurant for decades, keeping it open around the clock during the summer months in the 1960s and 1970s.

Famous actress and Philadelphia-native Grace Kelly, whose family owned a summer home in Ocean City at 26th Street and Wesley Avenue, is said to have briefly worked at The Chatterbox before she went on to Oscars acclaim and became the Princess of Monaco.

In more recent years, the Chatterbox was run by Maria and Bob Boyer, who purchased the business in 2014 and oversaw renovations to the property after it was damaged by Hurricane Sandy. The most recent owners, Regina Anthony and Giampaolo "John" Duva, undertook even more extensive renovations to fix up and preserve the structure.

Details about the new ownership's plans for the restaurant are expected to be shared in the coming weeks and months.