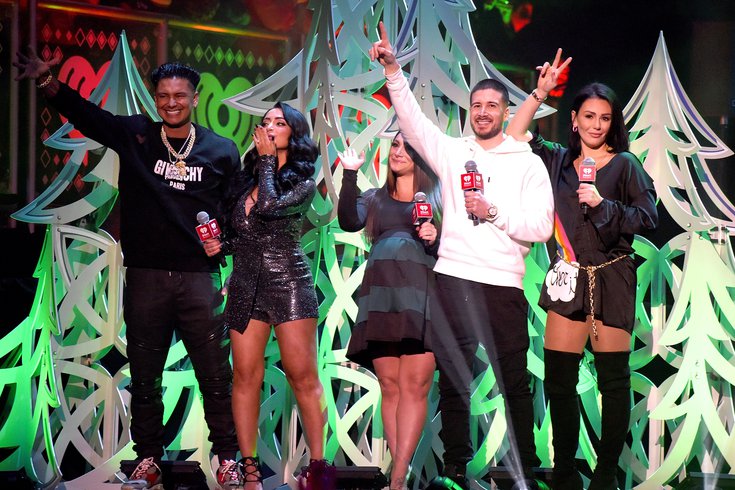 Cast members from the original "Jersey Shore" reality series are upset that MTV now plans to reboot the show as 'Jersey Shore 2.0,' bringing in a completely new cast a decade after the series concluded.

MTV is looking to refresh the "Jersey Shore" franchise with a new crop of gossiping partiers. The original cast that made the reality series a sensation in Seaside Heights isn't about it — at all.

And neither is Seaside Heights, which reportedly has told the show's producers the town isn't interested in letting them film there.

On Wednesday, MTV announced plans for "Jersey Shore 2.0," presenting the series as a tradition being passed on to a new generation.

"It's been 13 years since the iconic cast of Jersey Shore fist-pumped their way into our lives and stole our hearts. Now, the time-honored tradition continues with a new group of roommates moving into their own Shore house," the network said. "They may have traded their poofs for plumped pouts and UV rays for spray tans, but when things heat up in Jersey, the Shore is still the place to be to make memories all summer long."

The stars of the original series, which concluded in 2012 after six seasons, jointly bashed the idea and took umbrage at MTV's decision to "exploit" the concept they brought to life. The message on Twitter had the hashtag #WeAreJerseyShore and was shared by Nicole "Snooki" Polizzi, Mike "The Situation" Sorrentino, Pauly "DJ Pauly D" DelVecchio, Vinny Guadagnino, Jenni "JWoww" Farley, Angelina Pivarnick and Deena Nicole Cortese

"As a cast that took a chance with a network in need, we put our most vulnerable moments on television for the world to see," the statement began. "We gave our all over the past 13 years, became a family and continue to open our lives for the world. So please understand that we are not in support of a version that will exploit our original show, our hard work and authenticity to gain viewers."

Samantha Giancola and Ronnie Ortiz-Magro were not part of the statement. Giancola isn't part of the "Jersey Shore: Family Reunion" reboot that has spanned five seasons since it debuted in 2018. Ortiz-Magro, who is involved with the series, stepped away from the show earlier this year to seek mental health treatment.

The group's statement also plugged the upcoming season of "Jersey Shore: Family Reunion," which is slated to debut on June 30.

Local leaders in Seaside Heights and Lavallette both have told 495 Productions, the team behind "Jersey Shore 2.0" and other reality series, that the two barrier islands aren't eager to bring back the hoopla, according to reports from the Asbury Park Press and Lavallette Seaside Shorebeat.

Lavallette Mayor Walter LaCicero said he believes 495 Productions has been aggressive in looking for places to film the new series.

“It’s my understanding that they blanketed every town on both of the barrier islands with applications in hopes of having someone say ‘yes,'” LaCicero told Shorebeat.

Berkeley, Toms River and Brick Township all previously are reported to have turned down production requests.

It's not at all surprising that MTV wants to reprise the "Jersey Shore" concept with new, younger personalities. The network hasn't produced much in the way of "Daria"-type successes or other non-reality series that have stuck with audiences in the last two decades. Shows like "Jersey Shore" that thrive on manufactured drama and airbrushed social issues — guilty pleasures, basically — are what work for MTV. It gets harder to sell these shows to teenagers of a different generation when the stars are all in their thirties.

The outrage from the original cast seems a bit misplaced. It's not as if MTV hasn't given them a long run with a new show of their own, one that has been able to connect with audiences even when produced in locations outside New Jersey (which they also did during the original run, with a season in Italy). This could be a passing of the torch, but instead the cast is offended that the series would be treated like so many other reality series that bring in new faces.

MTV also announced it will reboot and recast "The Hills" franchise after a failed retread with "The Hills: New Beginnings," which was canceled in January after two seasons.

Maybe a new generation of "Jersey Shore" stars would bring less notoriety to the area, cleaning up the beach and whatnot, but a stereotype has clung to the area as a result of the original show and MTV's other summer productions in Seaside Heights. The town has been working to shed its party destination for a more family-friendly atmosphere ever since, including seeking new purposes for buildings, such as Taboo and Club Karma, that shuttered as vestiges of the "Jersey Shore" era.

It will be interesting to see where this series ultimately lands — who's willing to take the bad with the good — and whether it has a new tone this time around.