The doo-wop style pizza shop is touted as a turn key business that can be purchased for $180,000 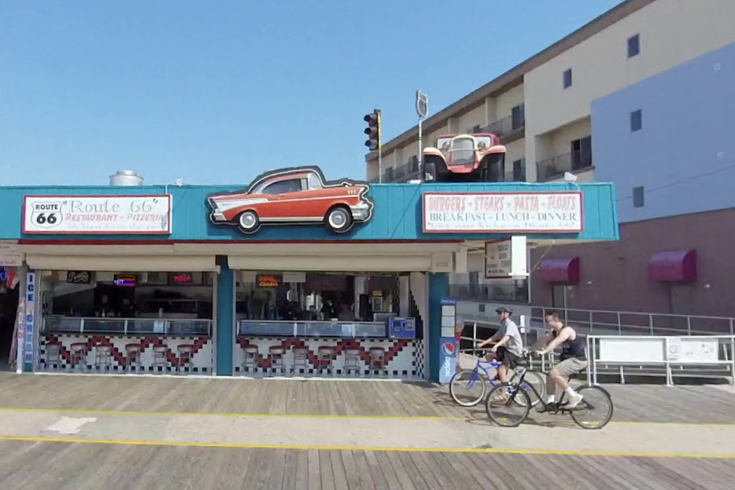 Route 66, the 1950's-themed restaurant on the Wildwood boardwalk, has been put up for sale at a price of $180,000 for the business and equipment.

The iconic Route 66 restaurant on the Wildwood boardwalk, known for its neon highway sign and vintage decor, has been listed for sale as the owner of the business plans his retirement.

The restaurant at 2700 Boardwalk is going for $180,000, including only the business and equipment inside. The boardwalk real estate is not included in the sale.

People walking the Wildwood boards can't miss Route 66, which sits on a corner near the middle of the boardwalk and has a bright red Hot Rod vehicle on the roof. Neon lights illuminate the storefront at night. Inside, there are statues of Betty Boop and Elvis Presley arranged around red-cushioned booths that recreate a bygone era, right down to the glossy tiles and checkered floors. The walls are lined with license plates and other memorabilia synonymous with the nostalgic character of Wildwood.

The business was taken over by owners Ria and Dino Pierelli in 2008, when they inherited some of the existing knick-knacks from the previous owner and touched up the 1950's theme to create Route 66. The business went on to receive a TripAdvisor Certificate of Excellence Award every year for the next decade-plus.

Dino Pierelli is looking to retire from the industry and spend more time relaxing on the beach during the summer months. The business remains open and will operate for the 2022 summer season.

"Dino is ready to retire," said Coastline Realty's Bob Dimitrov, who is handling the sale. "He's been in the food business for over 30 years."

The 140-seat restaurant includes two kitchens, one in the front and one in the back, that allow the business to operate as a full-service pizzeria and full-service restaurant. There's also a full basement for storage. The location right nearby the attractions of Morey's Piers makes it an especially solid proposition for a business owner.

"It's a well-known place and very well-located, which is important," Dimitrov said.

The property is currently leasing for $78,000 per year, with 2022 and 2023 remaining on the current contract. The buyer of the business will have an option for a five-year lease extension with the landlord, a subsidiary of Morey's Piers.

It will be interesting to see what happens with this property and whether it's snapped up before the busy summer season in Wildwood. The listing has been up since late April.

Interest in the business has been building over the last month, Dimitrov said, and Pierelli would ideally like to find a buyer who's ready to take it over for the upcoming summer season. The transaction is simplified by the fact that there's no transfer of real estate.

"It's a great opportunity for the operator to come in and start making money immediately," Dimitrov said. "We are going into season."

Pierelli also is offering support to a buyer to help oversee the operation and provide guidance getting started if it's requested, although this is not necessary if the buyer wants to take the reins fully from the outset.

There's been a push to preserve as much of the Wildwoods' doo-wop identity as possible, especially as more and more of the barrier island's 1950's motel architecture gets razed or converted into condos. Route 66 has been a prominent beacon of that aura going on 15 years. We'll have to wait to see what a new owner might have in mind for the space, or if a buyer decides the best move is to keep the business largely the same.

"People don't have to operate it as Route 66 if they have concepts that they want to do, but it's a unique place as it is, and a smart operator will just build upon it," Dimitrov said. "There's an opportunity to have something that stands out."