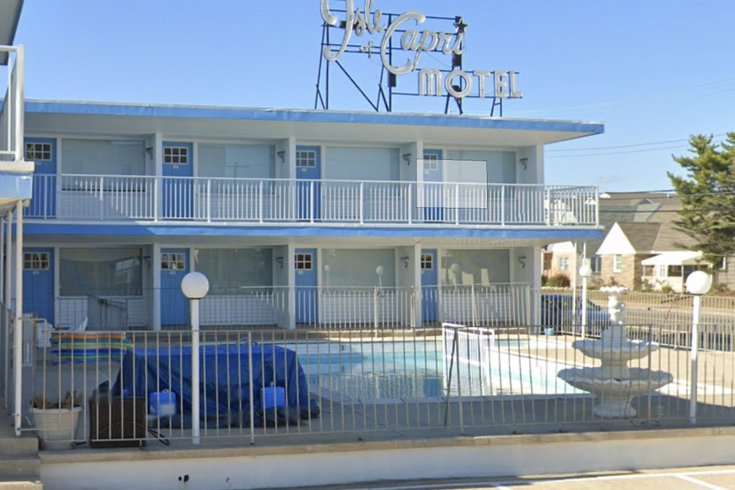 The Isle of Capri Hotel in North Wildwood will be renovated and reopened as the Seaport Inn in the summer of 2022, Philadelphia-based developer BG Capital revealed. The property is among the remaining relics of the 'Doo Wop' midcentury architecture that once defined parts of the Jersey Shore vacation experience.

The gradual disappearance of Wildwood's 1950s-style "Doo Wop" motels has been a sore subject for nostalgic Jersey Shore lifers, fascinated design enthusiasts and photographers for the better part of the last decade.

Wildwood encapsulates a perfect moment in the history of the American vacation. The mid-century architecture brought an idealized version of Las Vegas and Miami Beach to South Jersey, where working-class Wildwood represented a balmy, discounted access point to a fun and fabulous lifestyle.

The state of New Jersey recognizes a two-mile stretch of Wildwood — mostly in Wildwood Crest — as the "Wildwood Shore Resort Historic District" between Atlantic and Ocean avenues. There's even a Doo Wop Preservation League that works with city officials and local business owners to keep as many of these structures intact for future generations to enjoy.

The fact remains, however, that dozens of motels at the Jersey Shore have been demolished to make way for condominiums or have otherwise been converted into condos over the past few decades.

It comes as a pleasant surprise when plans emerge to give one of these buildings a face lift and a new lease on life.

Philadelphia-based developer BG Capital, one of the most active builders currently working in Wildwood, announced Tuesday that it has purchased the Isle of Capri Motel in North Wildwood and will renovate the property with plans to reopen as the Seaport Inn for the summer season in 2022.

Wildwood Video Archive, a website run by the town's cultural history buffs, had reported last month that the property at 500 Ocean Ave. sold for $1.64 million to 500 Ocean Ave LLC. The site's writers feared that the Isle of Capri Motel property, known for its beckoning neon sign, would be the latest to be converted into a hybrid condotel:

From 2004-2006 there was a renaissance of motels being sold to be demolished so that condos could be built.

Now we are in a new renaissance, the rise of the Condotels.

Two other Ocean Avenue properties, the Rus Mar Motel and the Rio Motel and Suites, also were sold in February.

More information about the Isle of Capri project came Tuesday from Wildwood 365, which reported that BG Capital's new Seaport Inn will become a 20-unit motel after undergoing a full renovation over the next few months. The name is a reference to the Seaport Pier bar, restaurant and entertainment complex that BG Capital renovated at 22nd and Boardwalk.

Additional information about the project wasn't immediately available, but is expected to be announced in the weeks and months ahead.

BG Capital's development plans in Wildwood have been heavily concentrated along Pacific Avenue.

The company is slated to build a residential complex containing 38 town homes and duplexes at the site of the former St. Anne's/Cape Trinity School on East Magnolia Avenue, with homes running east to west from Pacific to New Jersey avenues and north to south from Magnolia to Glenwood avenues.

BG Capital also acquired all of the properties along the west side of the 3800 block of Pacific Ave. last January, including the vacant VFW Post 3509 building and the former Joey M’s La Piazza Cucina next door.

The company also is working on a 74-unit residential development on several Pacific Avenue lots that will house international student workers who come to work in the shore town during the summer months.

And in January, BG Capital helped to preserve and relocate the original structure of Shamrock Beef & Ale, which closed during the pandemic after an iconic 80-year-run in Wildwood. The developer is believed to be working on plans for a new project yet to be announced at the Shamrock site.

“Most local business owners think of their ‘pickled’ motels as tacky dinosaurs and they’re, at best, befuddled by the very thing that the outsiders — the academics and hipsters and preservationists — have come to study, document, and celebrate,” Jonathan van Meter said in an essay on South Jersey's Doo Wop commericial architecture, which was referenced in a story Curbed wrote about the predicament in 2016.

The attention the issue has gotten created a wave of tourism in recent years, but that alone doesn't keep these businesses operating on incredibly valuable land.

The Isle of Capri Motel has been around for nearly a half-century and was open for business as recently as last summer. BG Capital may be giving it a new identity — hopefully with a neon sign — but it's nice to see at least some of this architecture surviving the onslaught of opportunity in real estate development at the Jersey Shore.