Wildwood's historic Shamrock building to be relocated and preserved

The former bar is an example of Queen Anne resort architecture and it will be moved to a new location on Jan. 10 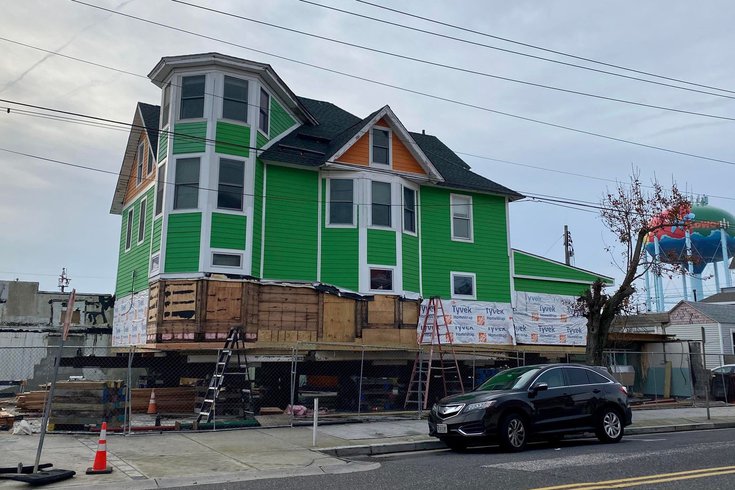 The original home of Shamrock Beef & Ale at the corner of Lincoln and Pacific avenues in Wildwood will be preserved at a new location.

Shamrock Beef & Ale shut down in Wildwood last June after an 80-year history as one of the Jersey Shore's most iconic bars.

The final months of the Shamrock's run were marked by the hardships of the coronavirus pandemic and violations of New Jersey's COVID-19 restrictions on restaurants and bars, which landed the business in hot water after management ignored rules about curfews, social distancing requirements and indoor dining regulations.

The New Jersey Attorney General's Office suspended the bar's liquor license leaving owner Tom Gerace with few options to keep Shamrock running. His other restaurants, Castaway's Pirate Bar and Club Amnesia, which were covered by the same liquor license and were part of the same complex on the 3700 block of Pacific Avenue, also closed last year.

But to preserve the history of Shamrock Beef & Ale's building, Gerace has reached an agreement to save the bar's original home by relocating it to another property on Pacific Avenue.

The bar and restaurant first opened in the late 1930s at the southwest corner of Lincoln and Pacific avenues as the Berwind Hotel. The property is considered a significant and well-maintained example of Queen Anne resort architecture, which was common in late 19th and early 20th century construction especially in Cape May.

As Wildwood became an increasingly popular tourist destination, many of its buildings had their first floors converted into businesses, such as stores and restaurants. The Berwind Hotel was purchased in 1937 by Irish immigrant Cornelius Ward, who moved upstairs and opened the Shamrock Cafe for "drinking and socializing" on the first floor, the news blog Wildwood365 wrote last week, citing information from Preserving the Wildwoods.

The original Shamrock was located inside this house before additions were constructed and adjacent properties were acquired during subsequent decades.

Gerace, who felt the property was a unique piece of Jersey Shore history, reached a deal with a Philadelphia real estate investment company to move the house several blocks away.

"We are thankful that we have been granted leave to relocate this iconic structure," Gerace told Wildwood365. "I'd be remiss if I did not personally recognize Joseph Byrne and his team at BG Capital, LLC for making this happen. The Shamrock building could have been demolished, but through our collaborative effort we were able to preserve this iconic piece of Wildwood."

The building is scheduled to be moved on Jan. 10.

Shamrock Beef & Ale's property was recently sold after Gerace held a liquidation sale in June, getting rid of the bar's equipment, furnishings and decorations. At the time, preservationists had hoped to keep the original Shamrock property intact and prevent it from becoming a parking lot.

"We stand to lose one of our oldest establishments in a historic building at the heart of downtown to a parking quota that would permanently hurt neighboring businesses and start a domino effect of blight," Preserving the Wildwoods said in an email to the Press of Atlantic City in June. "The demolition of the Shamrock will destroy Pacific Avenue."

BG Capital is poised to play a significant role in the redevelopment of downtown Wildwood in the coming years, with several projects already planned along Pacific Avenue in the blocks surrounding of the former Shamrock.

The developer is slated to build a residential complex containing 38 town homes and duplexes at the site of the former St. Anne's/Cape Trinity School on East Magnolia Avenue, with homes running east to west from Pacific to New Jersey avenues and north to south from Magnolia to Glenwood avenues.

BG Capital also acquired all of the properties along the west side of the 3800 block of Pacific Ave. last January, including the vacant VFW Post 3509 building and the former Joey M’s La Piazza Cucina next door.

The company also is working on a 74-unit residential development on several Pacific Avenue lots that will house international student workers who come to work in the shore town during the summer months, according to the Press of AC.

Gerace praised BG Capital president Joe Byrne for working with preservationists to reach a resolution on the Shamrock property.

"Byrne understands that in order to build Wildwood's future you have to appreciate its past which is the same approach they have taken to all of their development along Five Mile Beach."