Black Thought, legendary emcee of The Roots, gets honored with mural in Olde Kensington 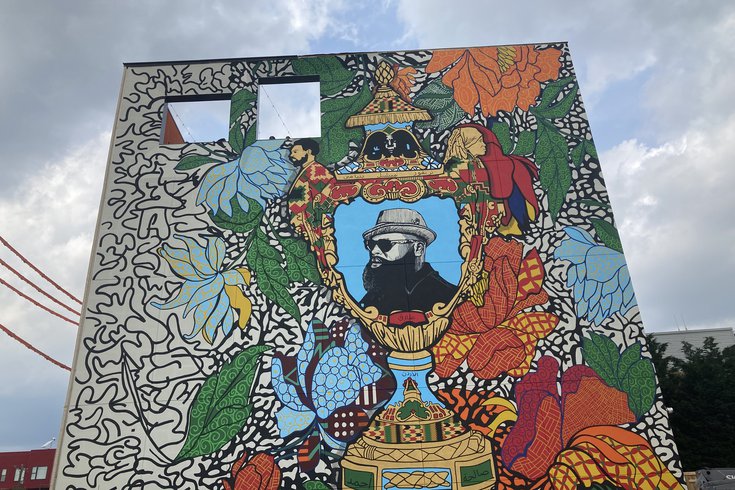 Black Thought, a co-founder of Philly hip hop group The Roots, was honored Thursday with the unveiling of a new mural, 'The Talented Mr. Trotter: You Can Be Anything,' by artist Roberto Lugo at The Clay Studio in Olde Kensington.

For nearly 35 years, The Roots have been Philadelphia's foremost ambassadors in the universe of hip-hop, representing the city with a supreme blend of technical mastery and socially conscious music.

Led by the iconic duo of Tariq "Black Thought" Trotter and Ahmir "Questlove" Thompson, the Legendary Roots Crew has won multiple Grammy Awards, helmed the annual Roots Picnic – which returns this weekend at the Mann Center – and cemented themselves as the house band of "The Tonight Show Starring Jimmy Fallon."

They've made it so far that what goes around has come back around – and now Black Thought's stylish profile will don the facade of The Clay Studio's brand new home in Olde Kensington.

The strikingly vivid mural by artist and Kensington native Roberto Lugo was unveiled Thursday afternoon at 1425 N. American St., depicting Trotter at the center of a vase wearing his shades and custom Frennel Morris hat. The project was done in conjunction with the Mural Arts Education Program, Olde Kensington Neighbors Association and South Kensington Community Partners.

For Trotter, a self-described miscreant who used to tag walls in South Philly as a teen, the honor of this mural surpasses any of the other accolades he and The Roots have earned over the years. That includes the existing mural of The Roots that's on South Street, between Broad and 15th streets.

"This is huge for me, to go from scaling buildings to get a little bit of rep and tag my name somewhere that may never be seen, to having my face plastered on the side of this four-story building," Trotter said. "It's pretty amazing. That's the stuff of legends. This reward overshadows every recognition that I've ever received." 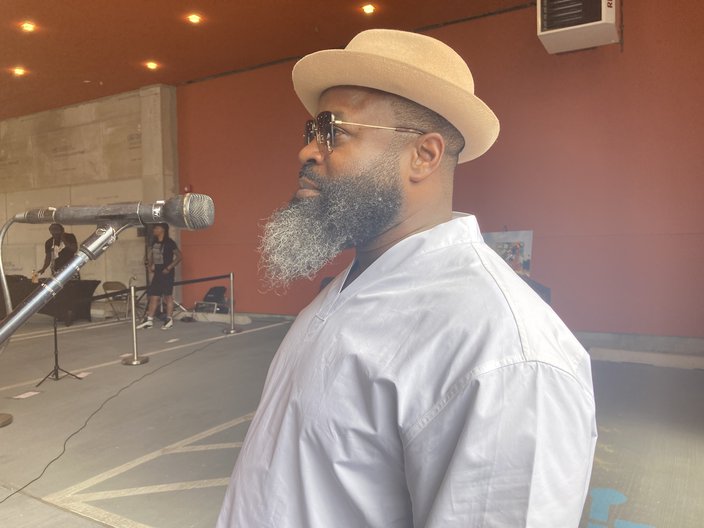 Tariq Trotter appeared at The Clay Studio in Olde Kensington on June 2 to celebrate the unveiling of his mural.

Trotter, 48, arguably deserves the crown as the most virtuosic emcee alive. His combination of piercing bars and a punchy delivery – still, somehow, growing stronger with age – puts him in a select group of rappers who transcend the genre's ever-evolving styles and trends.

Mention Black Thought alongside Mos Def, Andre 3000, KRS-One, Rakim and Nas over the last several decades and Trotter may low-key be the most versatile artist of them all. His formidable freestyle skills alone, famously flexed during a nearly 10-minute burst on Hot 97.1 FM, show a command with words that speaks to the way Trotter's cogency goes beyond mere rhyming prowess. His writing is as intellectual as it is artful.

Trotter's introduction to mural arts in Philadelphia was, ironically, a punitive experience. At 12 years old, he was arrested and sentenced by a judge to complete several hundred hours of "scrub time" with the Philadelphia Anti-Graffiti Network. The initiative was established by the city in the mid-1980's alongside the Mural Arts Project, with the joint goals of cleaning up blighted buildings and bringing more purposeful, enduring art to city walls.

That mission has brought more than 4,300 murals to Philly in the decades since, led by the passionate work of Jane Golden, the energetic executive director of Mural Arts Philadelphia. Trotter, who used to scrawl on walls under the name Double T, is now a member of the organization's board.

"The beauty of it all was that I began to work with the Anti-Graffiti Network in Philly, and that's when I first connected with Jane Golden," Trotter said. "Every time I get to work with Jane, it represents a full circle of a full circle moment for me."

Golden's unmatched enthusiasm for the arts has made her a direct force in shaping the lives of so many young Philly residents. Sometimes, she doesn't even realize the difference she's made. A couple years after he had been doing court-ordered graffiti cleanup, Trotter attended the Philadelphia High School for Creative and Performing Arts, where he famously met Questlove in the principal's office and formed a friendship that would bring Philly-made hip-hop to millions of people around the world.

"I didn't know (Black Thought) when we were doing the Anti-Graffiti Network," Golden said. "I mean, I had a vague idea that he was with us, but we work with so many thousands of young people. Then when we unveiled The Roots mural (in South Philadelphia), he looked at me and said, 'We know each other.'"

Lugo's impressive mural on The Clay Studio building, titled "The Talented Mr. Trotter: You Can Be Anything," contains design elements that were chosen in collaboration with Black Thought. The vase that frames Trotter's head is meant to signify royalty. 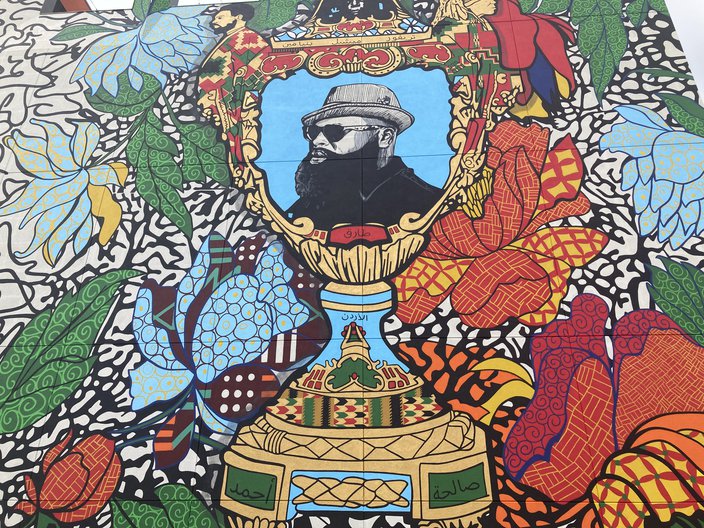 Artist Roberto Lugo designed 'The Talented Mr. Trotter: You Can Be Anything,' in collaboration with Tariq Trotter, aka Black Thought, of The Roots.

"This particular vase was made for French royalty," Lugo explained. "To be able to take the original idea out – that only the wealthy could commission it – and then think about people from this community being able to be in that place of royalty was really the crux of it."

Arabic lettering on the vase spells out the names of Trotter's children, while the bright colors are representative of imagery Lugo saw growing up in Philadelphia.

"If you look at my work, if you look closely, it's really inspired by a lot of the murals that were here when I was a child," Lugo said. "Portraiture of people of color, the colors, and also looking at how Mural Arts started as the Anti-Graffiti Network and how a lot of people who painted, including Tariq Trotter, were part of that. "

The larger goal of the mural is to inspire neighborhood students to blossom as artists, carrying the torch of others who have made Philadelphia's arts community so vibrant. As a teacher and regular Mural Arts collaborator, Lugo believes his work has the power to activate young people, pushing them to discovering their own potential.

"For me, education is crucial, if not more important than people even knowing who I am," Lugo said. "The more that I'm able to do what I do, I can foster and support other artists, and just let people know that these are things they're capable of doing. Being an educator is not just about teaching people about process, which is really important, but also being a representative and source of inspiration." 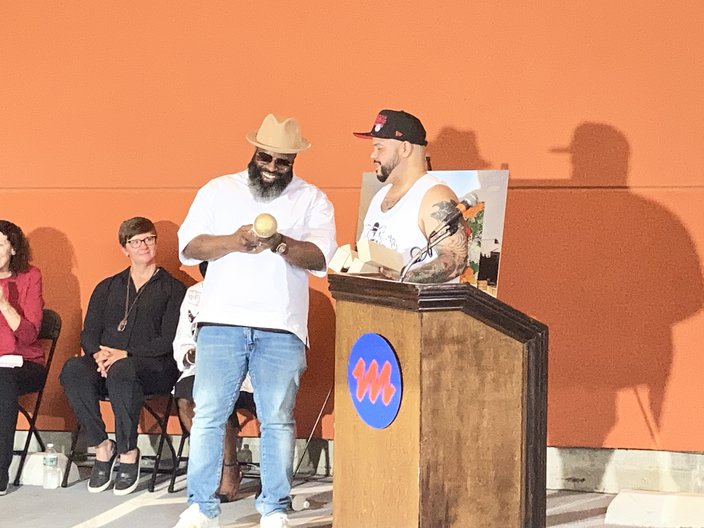 Lugo's Black Thought mural had been in the works for at least a few years since The Clay Studio – an education center focused on ceramics – made plans to move from its long-time home in Old City to the 34,000-square-foot building in Olde Kensington.

Golden said Thursday that she had the property scoped out before it even existed.

"You know we're wall hunters at Mural Arts, right?" Golden said. "We see walls even before they've come to fruition – and when they're there, we're identifying them. We have a wall list."

Golden agreed with Lugo's take on the importance of the new mural at The Clay Studio.

"It's phenomenal, but here's the thing. There are other Tariq Trotters out there, but where are they?" Golden asked. "That's why I love this mural so much and what the art is saying. It's about all the genius that resides in young people across our city that has sadly, historically gone unrecognized. We can change that. We have the power to shift that paradigm. We will be relentless about making sure every young person has access to art."

Golden hinted Thursday that Trotter may be involved in designing a mural of his own in Philadelphia in the coming years, but didn't provide details about when and where that might happen.

Beyond the return of the two-day Roots Picnic this weekend, Black Thought is preparing for the Aug. 12 release of "Cheat Codes," his collaboration with Danger Mouse. He's also the main composer and lyricist of the 2022 off-Broadway production "Black No More," which earned a nomination for “Best Musical” at the 2022 Lucile Lortell Awards.

This weekend's music festival, the 14th annual and first held in-person since the start of the COVID-19 pandemic, has been described as a "love letter to Philadelphia" with performances from homegrown artists including Jazmine Sullivan, Tierra Whack, Musiq Soulchild and DJ Jazzy Jeff, in addition to other acts.

On Thursday, surrounded by fans and family, Trotter reflected that his role with mural arts continues to be one of the highlights of his lifelong connection to Philadelphia.

"For me, to be a writer and to see my evolution, my trajectory, to be on the Mural Arts board, it's just huge," Trotter said, beaming behind his shades. "Mural Arts has always occupied a very special place in my heart."