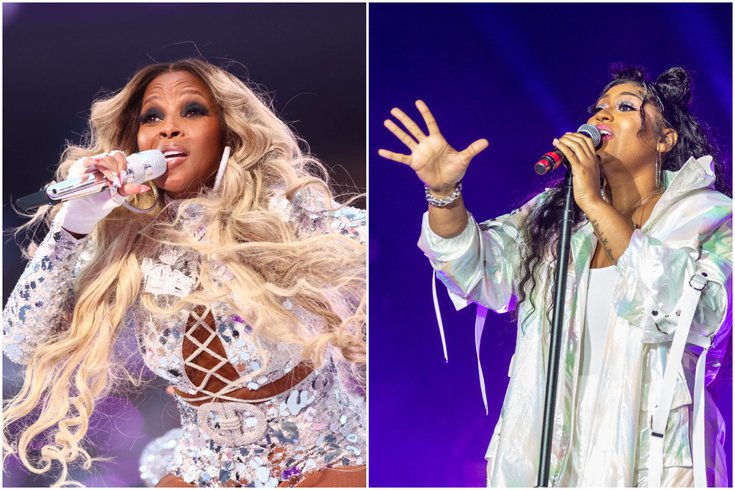 Mary J. Blige and Jazmine Sullivan are among the notable hip-hop and R&B musicians who will headline the 2022 Roots Picnic at The Mann Center this June.

For the first time since the start of the COVID-19 pandemic, the Roots Picnic will be returning in-person with a lineup featuring some of Philadelphia's biggest hip-hop and R&B stars.

The 2022 Roots Picnic will take place from June 4-5 at the Mann Center in Fairmount Park, event organizers said Tuesday.

Being billed this year as "a love letter to Philadelphia," some of the city's most popular musicians will perform at the two-day music festival.

Jazmine Sullivan, Tierra Whack, Musiq Soulchild and DJ Jazzy Jeff are among the notable Philly-native artists who will also be performing at this year's event.

Sullivan's appearance will come just months after she performs at The Met Philadelphia in March as part of her "Heaux Tales" tour. The R&B musician and her critically-acclaimed, 14-track record have already received several awards and are set for more honors, including a trio of Grammy nominations.

Whack, the North Philly rapper who has become well-known for her eye-catching songwriting and music videos, released three EPs in December titled "Rap?," "Pop?" and "R&B?."

The Grammy-nominated singer Soulchild will perform as part of the Soulquarians Jam Session featuring Keyshia Cole and SWV. DJ Jazzy Jeff will perform with rapper Rakim at the festival.

This is the first time that Roots Picnic will be held in-person since 2019. The 2020 edition was held virtually due to the COVID-19 pandemic, and there was no event last year because of the public health crisis.

"After a long two years, we are excited to announce the return of the Roots Picnic to Philly with two days of music and culture at the Mann at Fairmount Park," Live Nation Urban President and The Roots manager Shawn Gee said in a statement.

Special presale tickets for the event are available now with the code RPALUMNI. Tickets to the general public will be available starting Friday at 10 a.m. Two-day general admission, limited single-day and VIP packages will be available for purchase.

All attendees must provide proof of being fully vaccinated against COVID-19 or a negative COVID-19 test result within 72 hours of the event in order to enter the venue.

Those who are unable to attend this year's festival will be able to stream the event on The Roots' YouTube channel.