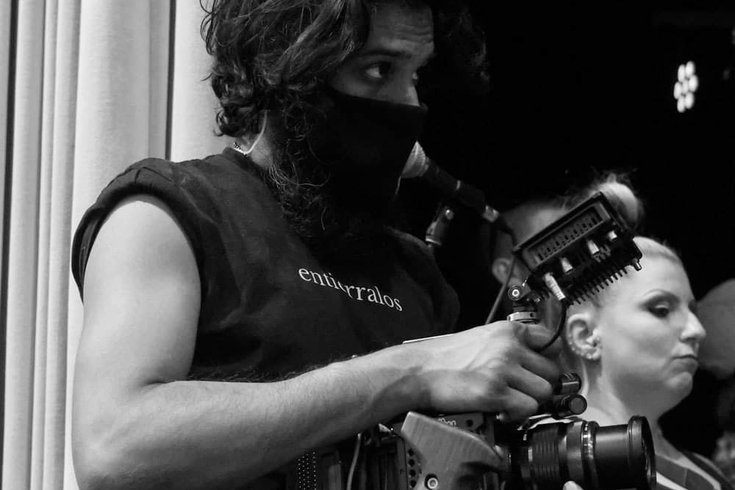 A Philadelphia resident with South Jersey roots has been bringing punk rock to the masses through YouTube for nearly a decade and a half.

Sunny Singh is the man behind Hate5Six, a collection of high-quality videos of hardcore punk concerts he has filmed, mostly in the Philly area. He has uploaded more than 5,000 videos to his website and YouTube channel, which has more than 150,000 subscribers.

Singh started Hate5Six, which he described as an archival project, back in 2008 and has been posting videos religiously since then. In 2018, he made it his full-time gig.

Although most of the content on Hate5Six is related to punk rock in some fashion, Singh hasn't cornered himself. He has also shot videos on BMX, which sparked his interest in filming, and promoted social justice movements which he sees as an important element of punk.

In June 2020, Singh filmed Philadelphia police as they teargassed peaceful protestors on I-676. His footage was widely shared amid the criticism of the police response. He also has been working on a documentary on Mumia Abu-Jamal, a journalist and Black Panther Party member convicted of killing a Philadelphia police officer in 1982.

The videographer makes most of his money on Patreon, where subscribers pay for early access to concert footage and the opportunity to help him decide which shows he'll film. He also gets some revenue from YouTube ads and will occasionally charge bands or promoters who want their shows filmed, although he often does it for free.

"I don't think Hate5Six would be what it is if I had not lived in Philly," said Singh, a 35-year-old who lives in South Philly. "I feel like Philly has always been … a hub for anyone who's interested in live music."

He added, "just having access to so many shows and so many different kinds of shows allowed me the freedom to shoot anything."

Singh usually films by himself from stage right, where he can get a good view of both the bands and the often rowdy crowds that come to see them. On occasion, he hires freelancers to help him capture additional angles.

More recently, Singh has posted footage of Gridiron, a punishing rap-influenced hardcore act from Boyerstown, and One Step Closer, an up-and-coming  band from Wilkes-Barre that's part of the straight edge movement, which promotes a drug- and alcohol-free lifestyle.

Early during the COVID-19 pandemic, when concerts were impossible, Singh kept his channel alive with some unique content.

Shortly after the nationwide lockdowns began in March 2020, Singh filmed a video of Code Orange playing an hour-long set in an empty venue the band had been scheduled to play.

They were one of the first bands to play a "livestream concert," which became a popular way for musicians to keep their audiences engaged through the lockdown.

Additionally, Singh started posting footage of concerts from before Hate5Six's time. Some of the sets came from his own collection and others were sent to him by fans.

A popular Facebook page has dubbed hundreds of decidedly not hardcore tunes onto the footage including the Mario Kart theme and Mariah Carey's "All I Want for Christmas Is You.

But that wouldn't be the last time Singh's footage would go viral.

Singh started adding content about social justice movements to Hate5Six in 2011. He said it's something he was inclined to do because of his background in punk, which he said is based around questioning societal norms.

When the police killing of George Floyd spurred racial justice demonstrations in many major U.S. cities in 2020, Singh was there to capture the moment.

"I did a lot of live streaming for Black Lives Matter in Philly, on the ground running around with my camera," he said. "I invested in the same live streaming gear that news stations use. ... I use that same level of equipment to broadcast my signal to Facebook, YouTube, Twitch."

On the afternoon of June 2, 2020, a large group of peaceful demonstrators occupied the Vine Street Expressway. Singh was streaming the protest live.

About an hour before a 6 p.m. curfew set due to the unrest, the Philadelphia Police Department launched tear gas in an effort to disperse the crowd.

Singh caught the incident on video. The footage went viral, and it was used by the New York Times for an in-depth visual investigation, which ultimately led to city officials apologizing.

Singh also has created a lot of content about Mumia Abu-Jamal, who was convicted of killing police officer Daniel Faulkner in 1982 and is serving a life-in-prison sentence. He is currently working on a documentary about the case.

Abu-Jamal's allies have long said he was framed and that crucial evidence was omitted from his trial. In 2019, the District Attorney's office recovered and publicized six boxes of documents relevant to the case that hadn't been included in the trial. Abu-Jamal's attorneys have argued the documents cast doubt on the stories of two of the prosecutor's key witnesses.

Still, many – including Faulkner's widow – believe Abu-Jamal is guilty and should stay in prison. A hearing on his latest appeal attempt is scheduled for March 2.

Singh said his documentary will be shown at the Philadelphia Film Festival.

From BMX to hardcore

Although today the videographer leads an exciting life in Philly pursuing his various passions, Singh had what he described as an uneventful upper-middle class upbringing in Marlton. He gleaned Hate5Six's name from South Jersey's 856 area code.

"There's not much to do in South Jersey," Singh said. Still, the formative years he spent there had a big influence on the adult he became. "I haven't changed much as a person, for better or worse, since high school," he said.

Both Singh's parents are immigrants from India. Growing up, Singh was one of the only people of color in town.

His older brother and sister initially got him interested in music, but it was Singh's passion for BMX biking that introduced him to hardcore. Punk rock tracks are often featured in videos displaying action sports – like skateboarding, rollerblading and BMX – and Singh said many of his BMX friends ended up forming bands.

Singh got into the flatland discipline of BMX – a niche activity, which has lost ground to BMX's park and street disciplines since it peaked in popularity in the 1980s – after seeing an ESPN segment on it. He began making videos featuring himself and his friends riding.

Park and street BMXers launch themselves into the air off ramps or pieces of the urban landscape to do their tricks, but flatlanders stay on the ground and do complex maneuvers that require extreme precision, usually while balancing on just one wheel.

In particular, Singh was influenced by the Plywood Hoods, a revolutionary group of flatlanders from York whose breakdancing background brought the sport to another level in the 1980s.

Though flatlanders previously had limited themselves to stationary tricks, the superior balancing abilities the Plywood Hoods had developed through their breakdancing allowed them to start doing the tricks while rolling.

But the main reason the group was so influential – even though they lived far from the West Coast, where most of the action sports industry was based – is that they captured their tricks on VHS tapes that were distributed nationwide.

Singh said his initial vision for Hate5Six was to do for hardcore punk what the Plywood Hoods had done for flatland BMX back in the day. He occasionally films BMX content, including his 2017 recap of a contest that happened in York.

When Singh got into hardcore around 2000, he was one of the only people of color in the South Jersey scene.

He said he was fortunate to have avoided the era of hardcore when neo-Nazis regularly came to hardcore shows.

"I'm thankful that people stood up and handled that back then," Singh said.

Still, it was challenging to not have someone else in the scene who could relate to his experiences as a person of color. Today, Singh says the hardcore scene is much more diverse.

"Nowadays I'm thankfully seeing a lot more people of color at shows and more people who are not just cis white men. Representation has definitely improved," he said. "I can now look at a crowd and see people who look like me and have some sort of comfort and love."

Singh said the pandemic has not killed the hardcore scene. Although some scenesters who regularly attended shows before the pandemic don't come out anymore, he said plenty of new faces have replaced them.

Additionally, Singh said many new bands formed in the Philly area over the course of the pandemic and that with restrictions being loosened, new promoters have popped up to put on house shows and concerts.

Back in the early 2000s, when Singh first got into the hardcore scene, he said he became "obsessed with how live music could be documented" and started collecting VHS tapes of punk shows.

But this was before YouTube, so he had no way to share his collection. Around 2003, he took a break from his film hobby to focus on applying to college.

Singh ended up going to Haverford College where he graduated with a degree in mathematics in 2008 before getting his master's in computer science from the University of Pennsylvania in 2011.

Around 2006, while Singh was working on his undergraduate degree, high-definition cameras came out. This led to a large number of high-quality, second-hand standard definition cameras going onto the market, and Singh bought one. He got back into filming videos and began shooting shows.

Singh started his YouTube channel in 2007, less than two years after the platform was created, and began the Hate5Six project in 2008. The rest is well-documented hardcore punk history.