The Roots are touring this summer, but a Philly homecoming isn't on the schedule

The legendary hip hop band will play nearby shows, including Baltimore and Montclair, New Jersey 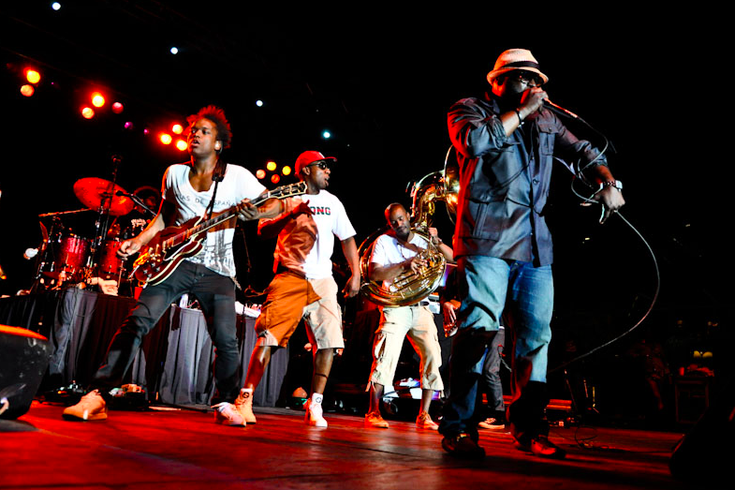 The Roots recently announced an 11-show summer tour but will not be performing in their hometown of Philadelphia during that stretch. The band's annual festival at the Mann Center for the Performing Arts in Fairmount Park was also canceled in 2021.

The Roots are taking some time off from their day job, but the work isn’t stopping for Black Thought, Questlove and company.

The legendary hip hop band from Philadelphia recently announced the “All The Way Live” summer tour, an 11-show run beginning Aug. 12 at Brooklyn’s Prospect Park Bandshell. The bad news, though, is that Philly won’t be graced with one of their electrifying concerts during that stretch — something many fans were quick to point out when Questlove shared the dates in a post to his Instagram page.

Replying to someone who wanted to know why The Roots weren't bringing the tour to North Carolina, the drummer said, “I only have 14 days off! #DayJobStill,” referencing the band’s nightly gig on “The Tonight Show Starring Jimmy Fallon.”

The Roots typically play in their hometown every summer at a festival they host at the Mann Center for the Performing Arts in Fairmount Park. With the COVID-19 pandemic upending live shows, however, the past two years have been anything but typical. The 2020 Roots Picnic, which would have included a headlining performance from Philly native Meek Mill, was canceled. The band instead opted to go virtual and tapped former first lady Michelle Obama to host a night of concerts streamed on YouTube.

Questlove recently told the Inquirer’s Dan DeLuca that the band was planning to hold the picnic in October 2021 at the Mann Center but ultimately had to cancel.

If you’re willing to travel, The Roots will have several shows near Philly during their summer tour, including Baltimore and Montclair, New Jersey. Check out the full schedule below.

For those in need of a quick hip hop fix, check out this video of the band recently performing their smash hit “You Got Me” at the MGM Grand Las Vegas before being joined onstage by comedian Dave Chappelle to cover Radiohead’s “Creep.”

You should also press play on Black Thought’s new audio story, called "7 Years.” As part of Audible's Words + Music series, the virtuoso MC chronicles his life — from growing up in Philly to co-founding The Roots with Questlove — in seven-year increments. Speaking of Questlove, you can watch his award-winning directing debut, "Summer Of Soul (...Or, When the Revolution Could Not Be Televised)," on Hulu and in select theaters.

A deluxe version of the band's second album, "Do You Want More?!!!??!," was also released recently and includes "a slew of remixes/bsides/songs that never made the album," Questlove said in an Instagram post.