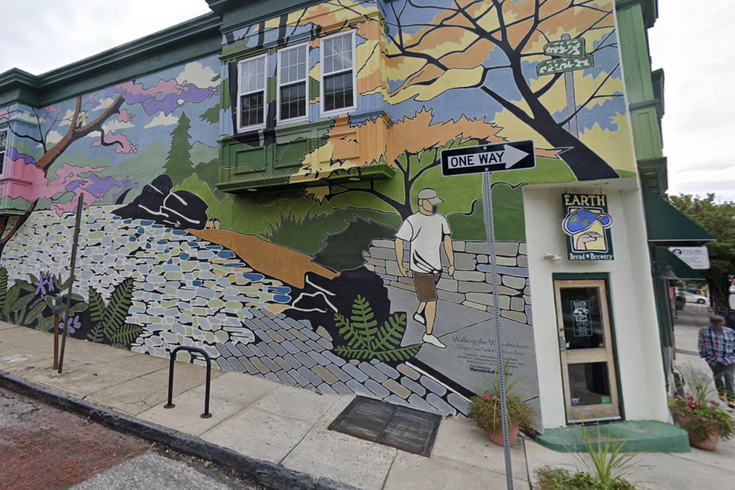 Mount Airy's Earth - Bread + Brewery, a community gathering place for beer and flatbread pizza, will permanently close its colorful restaurant on Germantown Avenue on July 1. Known for its popular events and ever-changing list of house brews, it has been a staple in the area for more than a decade.

Husband and wife owners Tom Baker and Peggy Zwerver announced Tuesday on Facebook that the challenges and struggles of the COVID-19 pandemic have caught up with the brewpub.

"It’s been an incredible ride for us, and we don’t wish to dwell on the hard times of the pandemic," the couple wrote. "Instead, let’s remember the packed houses in earlier times, the weddings, birthdays and anniversaries that were celebrated, the comedy shows, science nights, table tennis Tuesdays, kick the keg nights, tap takeovers, the live music, the local art, the many guests that we’ve served and the beers that we brewed. But especially, we cherish the friendships that we have made."

It’s said that no good thing lasts forever. And so, after 13+ years, Earth is closing permanently. Our last day of...

Baker and Zwerver thanked the many employees who have worked at Earth - Bread + Brewery over the years and said they will do what they can to assist current staff as they transition to new jobs.

The couple also shared their gratitude to Mount Airy and the community that supported the restaurant for 13 years.

"Thank you to our awesome neighborhood. Mt. Airy is truly a unique gem in this city of ours, and Earth was a perfect fit for Germantown Avenue," the couple continued. "Thank you to all of our regulars. We consider you a part of our Earth family. Hopefully you can make time during the next month to stop in and say hello and goodbye."

The year prior to the pandemic had been Earth - Bread + Brewery's most successful during its long run in Philadelphia, but business declined and never fully returned over the next two-plus years.

"We were always optimistic that we were beyond and there was light at the end of the tunnel — that maybe there wouldn't be all of these (COVID) variants and people would come out," Zwerver said during a call Tuesday afternoon. "We were lucky enough to get funding from all of the outlets that were available to us, which really helped, but business is just slow and not picking up like we'd hoped."

Baker and Zwerver owned Heavyweight Brewing Co. in Ocean Township, New Jersey, prior to opening Earth - Bread + Brewery in 2008. That brewery's distribution covered much of the East Coast, but Philly's appetite for their beer convinced them to open up a restaurant that would  champion a model of sustainability.

All of Earth's food waste, paper napkins and corn-based food cups have been composted for years, and the restaurant struck up community partnerships with other businesses in the city to encourage customers to donate soup and other used items. Even the decor, arranged by Zwerver, was largely sourced second-hand from Craigslist.

Earth - Bread + Brewery's flatbreads are made in a wood-fired oven that was hand-built at the restaurant by Baker, who used locally sourced organic dough and other ingredients. The simple menu of flatbreads and salads to go with beer and wine was always part of the restaurant's charm.

In 2016, Baker and Zwerver teamed up with Stew and Julie Keener of the Baggataway Tavern, in West Conshohocken, to open Fairmount's now-beloved Bar Hygge. The cozy brewpub has become one of the city's top casual dining destinations.

"Things have been so good at Bar Hygge. That neighborhood is just willing to come out, plus there's all that outdoor seating. That helped a lot," Zwerver said.

Early on after opening Earth - Bread + Brewery, Zwerver and Baker quickly found out that Northwest Philadelphia isn't the most accessible part of the city. It means many businesses rely on surrounding residents and people who have cars.

"We became very local," Zwerver said. "We drew a lot from Montgomery County and Roxborough, Manayunk. It's just so much different from downtown."

The couple doesn't own the property on Germantown Avenue, and it's unclear what will come next for the storefront. The wood-fired oven isn't going anywhere, given how heavy it is. Zwerver hopes the mural on the building remains a part of the community.

"If anybody touches that, I'd be so upset," Zwerver said. "I don't know that they can. That was done by Mural Arts."

Zwerver has seen many restaurants come and go from Philadelphia during her time as a business owner here. She's grateful to have been a part of the city's beer and pizza scene, and to remain part of the success at Bar Hygge.

"I've always been so saddened whenever I hear of anyone closing because, you know, that could be me," Zwerver said.

It's too soon to say what may come next for the storefront occupied by Earth - Bread + Brewery, but those with a hankering for beer and flatbreads still have a chance to pay a final visit over the next month. Quizzo is still on for the first and third Wednesdays of June. Bingo will also be held on the fourth Wednesday.

Zwerver reflected that Earth - Bread + Brewery's lifespan is bookended by two crises, and that she and her husband feel fortunate that the restaurant was able to catch on the way it did.

"What I'll remember most is how welcoming and supportive the neighborhood was from the beginning; 2008 was not the most financially stable year for everyone, and we were busy from day one," Zwerver said. "That was just remarkable to us how people came in ... and just kept coming in. I guess Mount Airy was missing something, anyway, but we filled some kind of void. It's been great."