Philly Beer Week returns for 2022 without some longstanding traditions

The Opening Tap kickoff party and Hammer of Glory relay will not happen this year. The festival takes place June 3-12 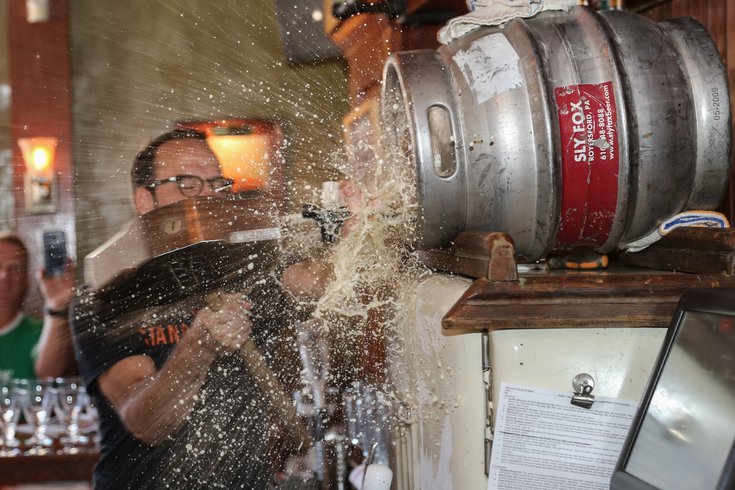 The Hammer of Glory relay, featured in this image, is one of Philly Beer Week traditions that won't returning for the festival this year between June 3 and 12.

Ale and lager lovers will get a whole nine days to explore some of the best brews the city has to offer at Philly Beer Week. It's returning next month from June 3 to 12, but it will look a little different this year.

The series of events will start with beer lovers across the city participating in a "simultaneous cheers" at 7 p.m. on Friday. The cheers will replace the "Opening Tap" kick off party that's begun the event since it was first held in 2008.

That's not the only tradition organizers are doing away with this year.

In the past, the second day of Beer Week has started with the Hammer of Glory relay, a cross between a pub crawl and the Olympic torchbearer ceremony.

This tradition required a series of runners to carry a hammer to different bars around the city. At the final destination, it would be used to smash open the first keg of beer week. In the past, event organizers would also charter a bus for those who wanted to follow the hammer through the city.

"We don’t have the human power we have had in the past to plan these things," the Philly Loves Beer Facebook page said when a commenter asked about the relay earlier this month.

But this doesn't mean Beer Week will have a small footprint this year. There are dozens of events planned at venues across the city

One of the largest will be the second annual Logjammin Lager Fest on Saturday from 1 to 5 p.m. at the Cherry Street Pier at 121 N Christopher Columbus Blvd.

The party hosted by North Philadelphia's Human Robot Brewery will feature lagers from more than 60 breweries located across the country and live music from acts including Kensington Clearwater Revival, a Creedence Clearwater Revival cover band.

This year, 100% of the proceeds will be going directly to the Michael James Jackson Foundation for Brewing & Distilling, which provides scholarships to people of color working in those industries.

Tickets are available for $65 on Eventbrite.

Beer Week will be a particularly big deal at the Varga Bar at 941 Spruce St. in Center City.

It will host a block party to kick off the event on Friday, June 3, a murder mystery night on Sunday, June 5, and an IPA day on Saturday, June 11 and more. Check out the bar's Instagram page for more details.

Two former Nickelodeon stars who now have their own podcast will get on stage at 8 p.m. on Friday, June 10 at Neshaminy Creek Brewing Co. at 909 Ray Ave. in Croydon.

In "Home Alone," Maronna had a role as the older brother of the protagonist Kevin, played by Macaulay Culkin, and Tambarelli had a part in "The Mighty Ducks."

Tickets are available for $25 on Eventbrite. Everyone who comes will get a signed poster for free.