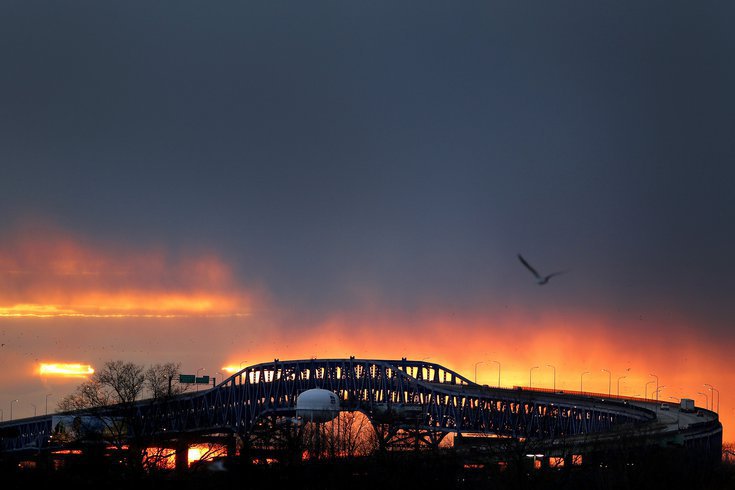 The Girard Point Bridge in South Philadelphia was among nine Pennsylvania spans where PennDOT had planned to create new tolls to fund their repairs and maintenance. The initiative was permanently blocked in court following legal challenges from affected communities.

A Commonwealth Court panel ruled Thursday that PennDOT cannot move forward with plans to impose tolls on nine interstate bridges that the department had argued would need new funding for repairs and long-term maintenance. The decision ends a battle over the department's legal right to select bridges for such toll projects without local participation and approval.

PennDOT had introduced the $2.2 billion plan in February of last year and chose nine candidate bridges across the state, including the Girard Point Bridge in South Philadelphia and the South Bridge in Harrisburg. The case reviewed by the court stemmed from a lawsuit filed by three municipalities in Allegheny County that were opposed to a new toll on the Bridgeville Bridge over I-79.

The department's plan, supported by Gov. Tom Wolf, had relied on the authority of the state's Public Private Partnerships board to raise revenue through new initiatives that don't require legislative approval by the General Assembly. The P3 board broadly approved the plan's framework in Nov. 2020, giving PennDOT the green light to define where and how it would be implemented.

Judge Ellen Ceisler, who temporarily halted the bridge tolling plan in May, wrote in her ruling Thursday that the P3 board did not perform its essential duties in approving the initiative.

“The board essentially approved a multibillion-dollar transportation project based on what was essentially a four-page PowerPoint recommendation from DOT that failed to delineate which, or how many, pieces of public infrastructure the initiative would affect,” Judge Ceisler wrote.

Ceisler added that towns in Allegheny demonstrated that PennDOT and the P3 did not create the initiative with the level of specificity needed to move forward with tolling major commuter bridges.

PennDOT had maintained that the plan was an important part of the Wolf administration's strategy to end the state's reliance on the gas tax to fund road and bridge projects. By tolling the nine selected bridges, PennDOT argued the initiative would free up federal infrastructure funds to be used for repairs to thousands of other bridges in poor condition.

"To date, the legislature has failed to offer any solutions beyond their approval of this P3 initiative, that will assist the administration’s desire to phase out the gas tax," a spokesperson for the governor's office said Thursday. "The Wolf Administration continues to welcome discussions with the General Assembly on alternative funding sources that can replace the gas tax, which is no longer a dependable source of funding to meet all bridge and highway needs in this commonwealth."

In March, PennDOT had begun contracting with a consortium of firms that were to undertake construction and maintenance on the nine candidate bridges. The plan was to install electronic gantries for $1-$2 tolls that would use E-ZPass transponders and license plate readers that bill drivers by mail. The initiative faced heavy resistance from affected communities that weren't consulted and from lawmakers who felt PennDOT lacked sufficient oversight.

John Smith, an attorney representing the three towns in the case out of Allegheny County, said they were pleased that "PennDOT's wrongful attempt to circumvent the statutorily required Municipal input and mandated oversight ... was correctly halted by the Commonwealth Court's declaring the tolling attempt void.”

A separate lawsuit also had been filed by Cumberland County and several other municipalities to stop the bridge tolling plan.

Major bridge replacement and rehabilitation projects in Pennsylvania historically have been funded through a combination of state gas tax revenue and federal infrastructure spending supported by the federal gas tax.

The state's 58.7 cents-per-gallon gas tax, already third-highest in the United States, has captured a falling share of revenue in recent years. More fuel-efficient cars, inflationary pressure and the expected future of electric and hybrid vehicles have left PennDOT and state lawmakers searching for new funding models.

Senate President Jake Corman and other Republican lawmakers praised the court's decision and called it a victory for Pennsylvania motorists.

“Government functions best when all parties are involved in negotiating a final product together," the Republican lawmakers said. "We remain ready and willing to engage with Governor Wolf, our colleagues in the House, and all other stakeholders to discuss how we should fund our road and bridge projects moving forward.”