South Philly's Girard Point Bridge is among the candidate projects for the plan, which would introduce $1-$2 tolls along I-95 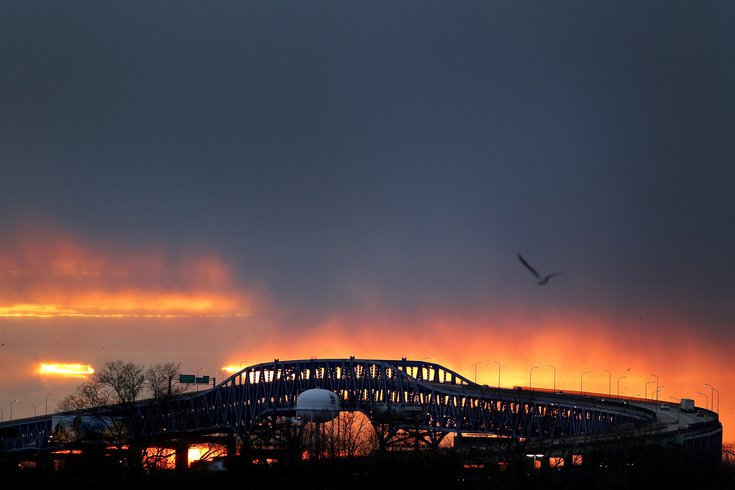 The Girard Point Bridge in South Philadelphia is among nine Pennsylvania bridges that could get new electronic tolls as part of a PennDOT public-private funding plan. The proposal was halted by a Commonwealth Court judge in response to a lawsuit out of Cumberland County.

A PennDOT initiative to implement tolls on up to nine interstate bridges has been temporarily halted by a Commonwealth Court judge, who issued a preliminary injunction on Wednesday to freeze progress on the plan. Cumberland County and seven other municipalities have filed a lawsuit claiming the bridge tolling program is illegal and unconstitutional.

PennDOT introduced the $2.2 billion plan early last year with support from Pennsylvania Gov. Tom Wolf. The proposal involves using a public-private partnership model to implement tolls between $1-$2 on some of the state's most cost-intensive bridges, ensuring that they receive critical repairs and maintenance.

The candidate bridges for the plan — including South Philadelphia's Girard Point Bridge on I-95 — are pictured in the map below. PennDOT had selected a consortium of companies in March to manage construction projects and long-term maintenance on these bridges, but the early planning stages of the initiative faced heavy resistance from some of the affected communities.

The lawsuit stems from local opposition to a toll on Harrisburg's South Bridge, which carries Interstate 83 and the Capital Beltway over the Susquehanna River in Cumberland County. The Girard Point Bridge crosses a roughly mile-long stretch of I-95 that heads southwest toward Philadelphia International Airport and northeast toward FDR Park, the Navy Yard and the sports complex.

The map above shows the nine proposed sites where PennDOT plans to introduce electronic tolls in order to fund major bridge repairs on interstate highways.

All of the proposed tolls would be fully electronic, meaning they would not have traffic-slowing tollbooths staffed by people. Instead, the bridges would have gantries installed to collect fees using E-ZPass transponders or license plate readers that bill drivers by mail.

Still, some communities and government officials in and around the candidate bridges have fought back against the proposal. The lawsuit argued that PennDOT's approval process unfairly bypassed public scrutiny and legislative oversight. Critics also contend that the state should tap newly available federal infrastructure funds or borrow from anticipated federal funds in the future to finance these projects, rather than create new user fees that burden residents and disrupt local traffic patterns.

The Wolf administration believes that raising toll revenue to fund work on these bridges will free up new federal infrastructure funding to address problems on thousands of smaller bridges in Pennsylvania. The state owns about 25,000 bridges and PennDOT provides funding and inspections for more than 6,500 other local bridges.

About 2,500 bridges in Pennsylvania are rated in poor condition, according to PennDOT.

The ruling made Wednesday by Commonwealth Court Judge Ellen Ceisler orders PennDOT to stop all studies, right-of-way acquisitions, construction or work under any contracts. It also suspends any planned hearings, meetings or spending related to the initiative.

PennDOT spokesperson Alexis Campbell said Thursday that the department is reviewing the judge's opinion, but declined to comment further on the matter.

Major bridge replacement and rehabilitation projects in Pennsylvania historically have been funded through a combination of state gas tax revenue and federal infrastructure spending supported by the federal gas tax.

But Pennsylvania's 58.7 cents-per-gallon gas tax, already third-highest in the United States, has captured a falling share of revenue in recent years. More fuel-efficient cars, inflationary pressure and the expected future of electric and hybrid vehicles have left PennDOT and state lawmakers searching for new funding models.

Among the nine candidate bridges, the Girard Point Bridge was one of the last added for consideration and had been behind schedule from the others, some of which may have seen tolls introduced as early as next year.

In March, PennDOT officials said work on the Girard Point Bridge would include extensive deck repairs and repainting of the nearly 50-year-old bridge, in addition to repairs on approximately 20 approach structures. The bridge would not be shut down during the construction phase.

"It's a big, complicated thing. It's a lot of detail, a lot of engineering and a lot of inspection," said Charles Davies, PennDOT's lead project engineer for the preliminary phase of the Girard Point Bridge Improvement Project. "This project, among all of the nine, is somewhat unique in that it is a rehabilitation and not a reconstruction. Its structure has a lot of complexity. The bridge is not that old, but it does get a tremendous amount of use."

PennDOT had been in the process of conducting feasibility studies and full environmental assessments for all nine bridges prior to the temporary injunction. In South Philadelphia, this included a construction design plan and considerations about how a toll might divert traffic patterns to other roadways and bridges in the vicinity, such as the busy Platt Street Bridge to the north.

The first public hearings about the Girard Point Bridge were expected to be held this summer, Davies said. The court ruling now puts the timeline and future of the plan in jeopardy.

Under the bridge tolling initiative, the consortium of companies selected by PennDOT would manage the bridges over a 30-year period, with all toll revenue reinvested in the communities associated with the bridges where funds were collected. The tolls also would be subject to occasional changes in fee, though officials said they would be kept reasonable given their importance to commuters and transport logistics.

The crux of the legal battle over the bridge toll plan comes down to PennDOT's use of the state's Public-Private Partnerships Board. The appointed seven-member board, created in 2012, has the power to examine and approve potential public-private projects on its own without secondary approval by the General Assembly.

The lawsuit filed to stop the South Bridge project in Harrisburg claims that the P3 board failed to identify specific candidate bridges when it first passed a resolution in November 2020, giving a green light to the concept of tolling major crossings in Pennsylvania to fund their repairs.

Affected municipalities say they were not consulted before the candidate bridges were chosen, and the General Assembly didn't have a meaningful chance to scrutinize the plan since specific projects had not been identified until after the review period for the bridge tolling initiative had expired, the lawsuit claims.

State lawmakers mounted efforts last year to amend the 2012 statute and void PennDOT's bridge tolling plan. Both the Senate and House of Representatives passed bills to halt the new bridge tolls, but Gov. Wolf's continued support for the initiative likely would be enough to overcome the opposition, barring a victory in court and a permanent injunction to stop the plan.

Senate Bill 382, the measure to fight PennDOT's plan, was referred back to the Senate Rules Committee last November and has not moved forward since that time. The proposal would require legislative approval for specific bridge toll projects of the kind PennDOT is pursuing.

With a gubernatorial election in Pennsylvania this year, the court case over the bridge tolling plan figures to be a hot-button political issue in the months ahead.