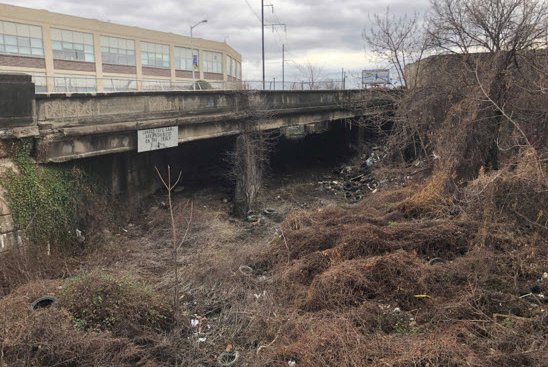 Over the next year, PennDOT will remove the Fifth Street Bridge in North Philly and reconstruct the portion of the street running between between Hunting Park Avenue and Bristol Street.

PennDOT will begin work next week on a year-long project to remove the aging Fifth Street Bridge in North Philadelphia and rebuild the section of the street that runs between Hunting Park Avenue and Bristol Street.

The $7.8 million improvement project will result in a series of closures for motorists and pedestrians in the months ahead. Part of the work will include water main relocation along Bristol Street, which will be closed and detoured at the intersection at Fifth Street.

The bridge in Hunting Park, which runs over an abandoned Conrail line, is in poor condition. It will be replaced with newly-constructed roadway, PennDOT spokesperson Brad Rudolph said.

PennDOT's work aims to rebuild that stretch of Fifth Street to safely and efficiently handle the volume of traffic on the roadway. On an average day, Fifth Street handles about 11,700 vehicles.

For safety reasons, the west side of the Fifth Street Bridge already has been closed to foot traffic. PennDOT also made a series of bridge repairs enabling the structure to last until the start of the improvement project.

The northbound and southbound closures over the next year will impact cars, trucks and pedestrians in several stages. Drivers are advised to allow extra time when traveling near the work area or on the detour routes.

Beginning Tuesday, drivers heading northbound on Fifth Street will be detoured left on Hunting Park Avenue, right on Sixth Street and then right on Cayuga Street. They can then make a left to return to Fifth Street.

Those going southbound will follow two different detours, depending on whether Bristol Street is closed for the water main project.

When Bristol Street is closed, southbound motorists will turn right on Cayuga Street, left on Sixth Street and left on Hunting Park Avenue. They then can make a right on Fifth Street.

When Bristol Street is reopened in November, southbound drivers will turn left on Bristol Street, right on Rising Sun Avenue and left on Hunting Park Avenue. They then can return to Fifth Street.

All pedestrians will be detoured to Bristol Street, Third Street and Hunting Park Avenue.

PennDOT has a series of maps that can be referenced for detours in both directions during the project.

The start of the Fifth Street Bridge project comes after PennDOT completed work last month to remove the bridge that carried Erie Avenue over an abandoned Conrail line. The agency rebuilt the roadway between Third and Lawrence streets.