Historic Health Center No. 1 will still be restored and preserved 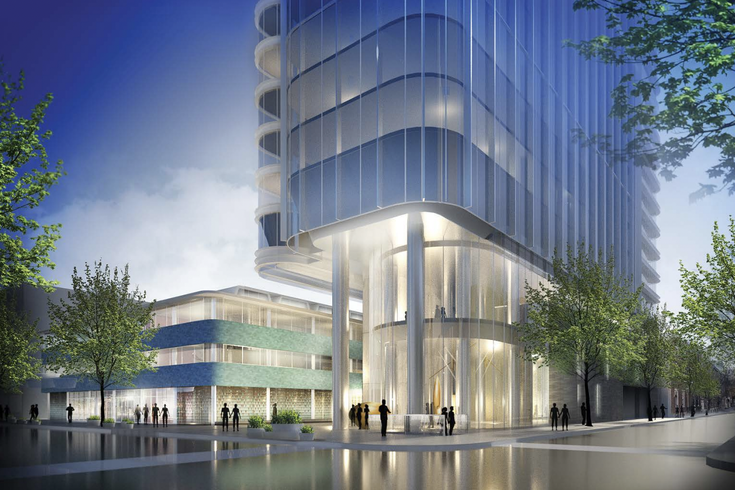 The rendering above shows a residential tower proposed next to the historic Health Center One building at South Broad and Lombard streets in Center City.

The corner of South Broad and Lombard streets has long been eyed for redevelopment as a prime Center City intersection that remains relatively underutilized.

One of the complications of planning for the lots at 500-10 South Broad Street is the presence of the historic District Health Center One on an adjacent lot. Built in 1960, the three-story property was given historic protection in 2017, nominated by the Preservation Alliance for Greater Philadelphia for its "distinctly space-age design" and status as a mid-century symbol of "progressive health care reforms."

A portion of the building is still used for the department's Public Health Lab until construction is completed on a new space, a spokesperson said.

In March, it looked like momentum might be building toward a major $450 million redevelopment that would include a Virgin Hotel tower on the lot next to the health center, along with a theater and restaurant to add to the Avenue of the Arts. Virgin Hotels had indicated during the pandemic that it was exploring new projects in Philadelphia and other cities. A second tower also was shown in renderings on the north side of the health center.

New documents from the Philadelphia Historical Commission suggest a different plan is afoot at this location.

The submission to the historical commission indicates the health center restoration would be led by Voith & Mactavish Architects. The glass- and metal-paneled tower would be designed by SITIO architecture + urbanism. The development will be led by The Goldenberg Group.

Before the pandemic, another proposal at the site had called for a different residential building to be built on the surface lot next to the health center.

There's no timeline attached to the project yet, but after years of stalled momentum at this corner, there looks to be more of a plan coming into focus.