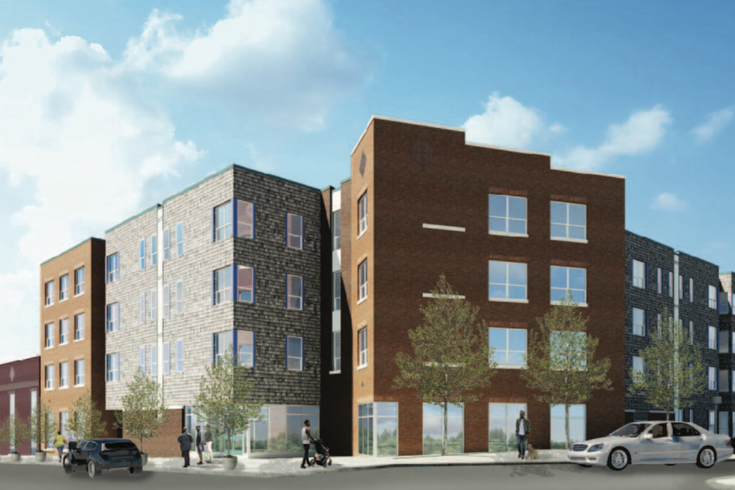 A rendering above shows the Be A Gem Crossing affordable housing project that broke ground Tuesday at the corner of Germantown Avenue and Westmoreland Street in the East Tioga neighborhood of North Philadelphia.

A North Philadelphia motel that had long been a magnet for crime will be repurposed as an affordable housing complex in East Tioga.

The non-profit North10 Philadelphia, a community-focused foundation dedicated to neighborhood development, broke ground Tuesday on the Be A Gem Crossing project at the former Liberty Motel. The property at the corner of Germantown Avenue and Westmoreland Street, which for years operated as a rent-by-the-hour motel, will be adapted into a four-story building with 41 apartments and a ground-floor health clinic.

The $20 million project will serve low-income families with a mix of unit sizes. The majority of the apartments will be subsidized with vouchers from the Philadelphia Housing Authority, capping housing expenses at 30% of a tenant's income.

North10 bought the Liberty Motel in 2018 with the hope of giving the corner a new identity. The motel had become associated with drug use, violence and prostitution over the years and was a nuisance given its close proximity to Bethune Elementary School.

"The median income of this neighborhood is about $21,000 a year," North10 executive director Josh Klaris told the Philadelphia Tribune. "It struggles with a lot of intergenerational poverty. And so keeping apartments as affordable for folks in this neighborhood as possible was absolutely a goal."

North10's mission is supported by the H. Chase Lenfest Foundation, which helped spearhead the The Lenfest Center at 3890 N. 10th St. The community center has been a space for neighborhood programming for more than a decade.

The construction of Be A Gem Crossing, which combines adaptive reuse and new construction, is expected to take approximately a year to complete.