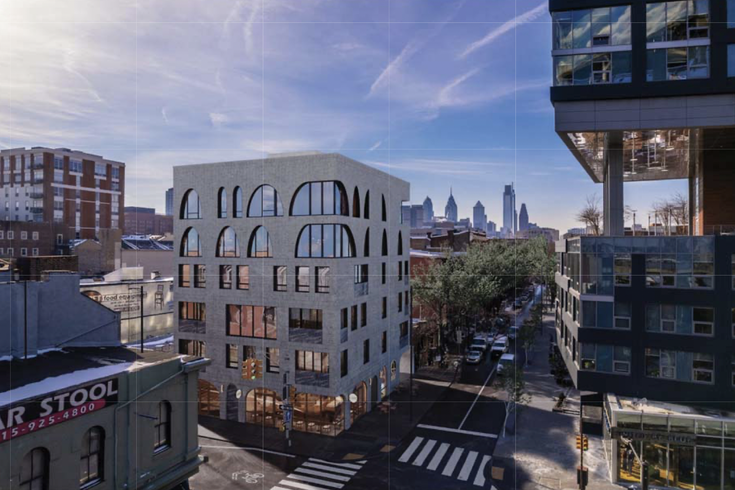 The rendering above shows The Ben, a six-story luxury condo building proposed at 2nd and Race streets in Old City.

The Philadelphia Historical Commission is reviewing a proposal for a six-story condo building at the southwest corner of 2nd and Race streets in Old City.

Led by BVG Property Group and designed by M Architects, The Ben would include six condos with a mix of two-bedroom and four-bedroom units. A penthouse on the top floor would also have a private roof deck.

The lots at 160-164 N. 2nd St. fall within the Old City Historic District, making any new development plans there subject to approval by the historical commission. Just a block south of the Benjamin Franklin Bridge, the proposed site is across the street from the 17-story Bridge on Race apartment building, which has 146 units.

Documents from the historical commission note that the consolidated parcel where the building is proposed includes a vacant lot and two "non-contributing buildings" that have since been demolished, OCF Realty reported.

In the current proposal, three of the building's elevations would feature grey brick and arched window openings, while the south wall would be clad in metal panels with a mural depicting the bridge. The residential lobby would be accessed from Race Street and a three-car garage would be reached from N. 2nd Street.

In 2019, the historical commission approved plans for a different six-story building at the site, but the project never moved forward. Numerous proposals, including taller towers, have also been put forward over the years, but never came to fruition.

The historical commission's staff has recommended approval for The Ben, but design changes may still be in order. A construction timeline for the project is not yet known.