Watch the demolition of the former FMC smokestack in Delaware County 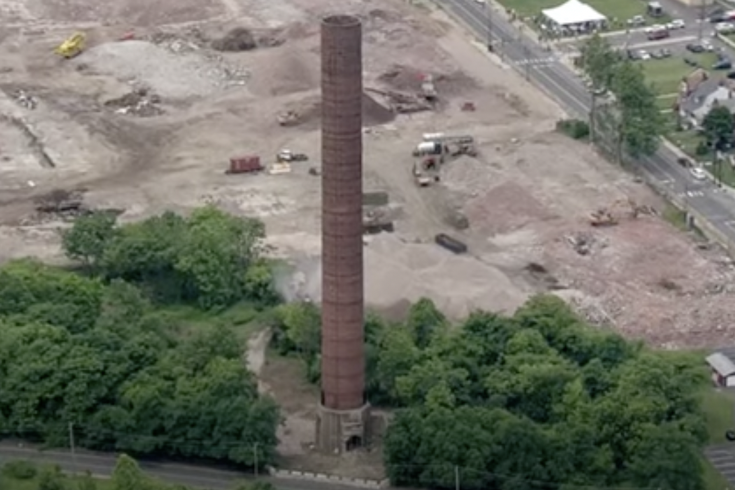 The smokestack at the former FMC/American Viscose plant in Marcus Hook, Delaware County was demolished on Tuesday morning. The smokestack had been on the 30-acre property for more than a century.

A 225-foot-tall smokestack that has been in Marcus Hook for more than a century came crashing to the ground on Tuesday morning as part of a planned demolition at the former industrial site.

The brick stack, built in 1917, was knocked down around 11:00 on the former site of the FMC/American Viscose property. Officials in Marcus Hook Borough had cleared the area around the intersection of 10th and Penn Avenue and put a number of road closures into effect out of precaution.

Aerial footage of the demolition shows the smokestack collapse into a thick plume of dust and debris.


FMC is a chemical manufacturing and technology company based in Philadelphia. American Viscose was a U.S. division of Britain's Courtaulds, which was known for manufacturing Rayon and other synthetic fibers. The company had another Pennsylvania plant in Lewistown, Mifflin County, and several others in Virginia and West Virginia.

FMC acquired American Viscose in the early 1960's and took over the former Marcus Hook plant, which was used to make cellophane. FMC later shut down the plant in 1977.

The 30-acre property has been through a number of stalled redevelopment initiatives, but now appears on track to become a 475,000-square-foot warehouse complex. Most of the structures on the property remained there for several decades after the plant's closure, but the smoke stack was the last of them to come down.

A timeline for the completion of the warehouse project has not been released.

The video below offers a look at some of the buildings that once stood on the property.