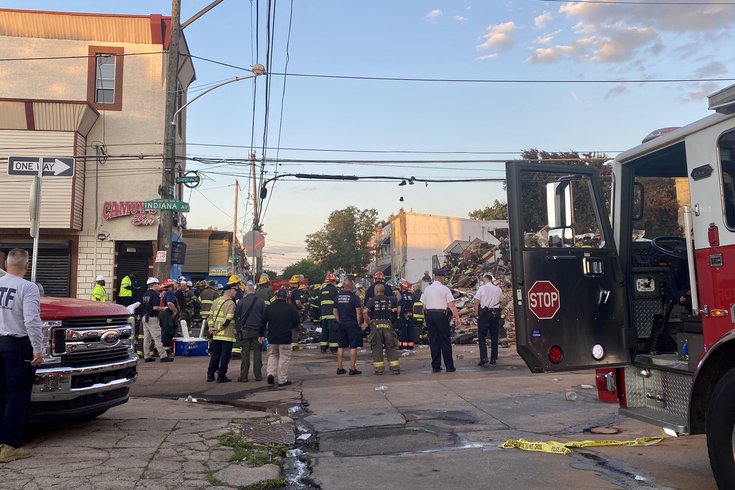 Al-Ashraf Khalil, 28, is accused of setting the June 18 fire that caused the collapse of a building he owned in North Philadelphia's Fairhill neighborhood. Lt. Sean Williamson, a 27-year veteran of the Philadelphia Fire Department, was killed when the building collapsed.

The owner of a Fairhill building that caught fire and collapsed earlier this month, killing 27-year Philadelphia Fire Department veteran Sean Williamson, has been charged with intentionally setting the fire and lying to federal investigators during an ongoing probe of the incident.

ATF officials, U.S. Marshals and other law enforcement partners announced charges Tuesday against 28-year-old Al-Ashraf Khalil, who had attempted to flee overseas to Jordan, authorities said. Khalil was denied entry in Amman and was taken into custody in New York. He will be extradited to Philadelphia.

U.S. Marshals said that Khalil was arrested in handcuffs that had Williamson's initials and badge number on them.

The overnight fire on June 18 broke out at Star Pizza, the ground floor business of a three-story commercial building at the corner of Third Street and West Indiana Avenue. The upper floors of the building were apartments.

Khalil allegedly told authorities that he was at home when a tenant called him from the property to inform him of the flames coming from the building shortly before 2 a.m.

But phone records and surveillance video obtained by investigators allegedly show that Khalil had gone in and out of the building around the time the fire started, according to a criminal complaint. Investigators also presented photos that allegedly show Khalil at the scene of the fire.

A second suspect seen with Khalil at the scene remains wanted by police, authorities said. No additional information about the second suspect was released.

After Khalil was initially questioned by police, he tried to avoid facing charges by hiding in the Middle East, investigators said.

Khalil's arrest marks the first step in an investigation that is expected to last at least several weeks. He is charged with maliciously damaging a building by means of fire, aiding and abetting, and making false statements to police.

On the morning of the fire, first responders arrived shortly after 2:00 and evacuated eight people from the building. The flames were put out within an hour, but by 3:30, a large chunk of the building had collapsed.

Lieutenant Williamson, 51, was still at the scene with four other firefighters and an inspector from the Department of Licenses & Inspections. The others managed to escape, including two firefighters who were critically injured, but Williamson was found dead in the rubble after a search that lasted several hours.

Subsequent investigation into the fire determined that the building was not licensed to have the first-floor restaurant and didn't have licenses to rent the apartments, a city spokesperson said. The fire marshal's investigation remains ongoing.

Williamson, a Philadelphia native and U.S. Marine, joined the Philadelphia Fire Department in 1994 and was assigned to Ladder 18 in North Philadelphia. He served as a mentor to many young firefighters throughout his career. His funeral in South Philadelphia on Monday was attended by more than 1,000 people, including firefighters from across the region who traveled to pay their respects.