The first red bus-only lane in the city is on Chestnut Street between Broad and 2nd streets, in a larger effort to improve SEPTA service 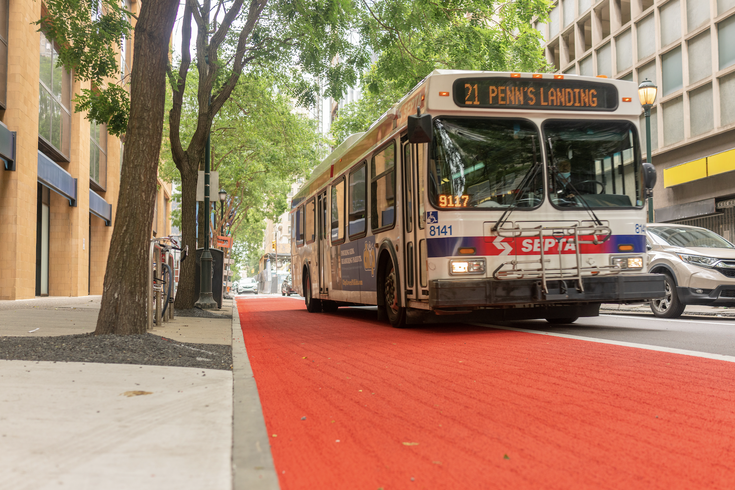 Philadelphia rolled out red paint along Chestnut Street's bus-only lane earlier this month in order to improve SEPTA's reliability and speed. Red bus lanes have shown to be beneficial for commuters in other cities.

Those traveling along Chestnut Street in Center City this month may have seen a new addition to the roadway: red paint, rolled down the bus-only lanes in an effort to enhance efficiency for SEPTA drivers and commuters.

Though the city previously implemented green bike-only lanes throughout the city, these bus-only lanes are closest to the street, and present an easy way for drivers and public transit users to hop on the bus and get to their destination quickly, without the hassle of city traffic congestion.

The effort was made possible through a partnership between the city's Office of Transportation, Infrastructure, and Sustainability, SEPTA, and PennDOT, all of whom noted the importance of reliable and quick public transit on both SEPTA ridership and transit safety.

"The outreach we have completed for Bus Revolution (SEPTA's community feedback program) revealed that the biggest opportunities to strengthen the bus system are improving speed and reliability," said Jody Holton, SEPTA's chief of planning. "SEPTA is excited to work with our partner agencies in the region on this significant initiative to improve visibility and safety on this corridor."

Red paint has been shown to improve the compliance of bus lanes, making it clear where drivers should be traveling. Implementing red bus-only lanes can reduce car intrusions by 30% to 50%, according to the National Association of City Transportation Officials.

For Philly's new red lanes, compliance will be based primarily on drivers respecting the rules of the road, as police will not be present all day long, Dan Nemiroff, a SEPTA transit planner, told the Inquirer. The city is set to expand its red bus lanes throughout the year, making SEPTA rides quicker and improving experiences for transit riders. 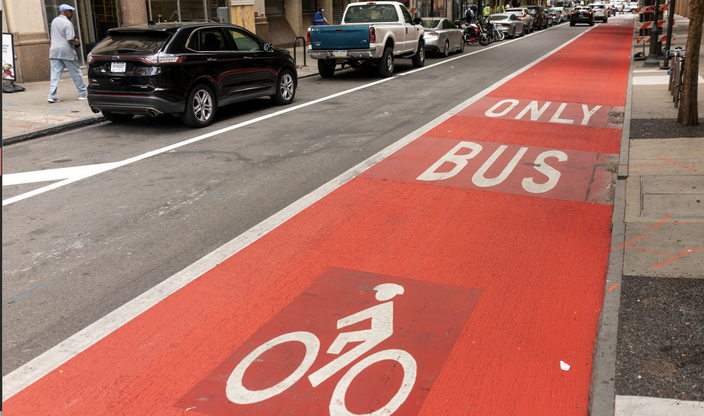 The red bus lane stretches along Chestnut Street from Broad to 2nd streets, and the city hopes to expand the initiative to other traffic corridors throughout the city.

Red bus lanes have seen success in other cities, including Boston. Dedicated bus lanes in several communities throughout Boston allowed commuters to get to their destinations quicker, and increased transit reliability. Other cities that have implemented dedicated bus lanes, like New York City, Seattle, San Francisco, and Chicago have also seen improvements in traffic congestion and overall transit experience for riders.

"We value this opportunity to partner with the city and SEPTA on this pilot program," said Louis Belmonte, a PennDOT executive. "We anticipate the red bus lane will help encourage the use of public transit, enhance safety, and make for an overall better experience for all road users."

The effort is part of a wider plan between SEPTA, the city, and other transit agencies to improve the reliability of public transit in the city and boost ridership, which still has yet to recoup its losses from the height of the COVID-19 pandemic. SEPTA has attempted no shortage of incentives to encourage people to return to SEPTA and leave their cars at home.

Earlier this month, City Council passed a bill that will require some Philadelphia businesses to provide a public transit benefit for commuters. Other companies — like Wawa, Drexel University, and Penn Medicine — have taken part in a six-month pilot program, buying SEPTA Key Cards for their employees in order to bring workers back to public transit.

There will be no fare increases, and some select lines will see fare decreases beginning in July. One-Day Convenience Passes will be lowered from $9 to $6, while Three Day Passes will be reduced from $18 to $15.