In a 6-3 vote, the justices ended nearly 50 years of constitutional protections; Pennsylvania, New Jersey, and Delaware will retain abortion rights 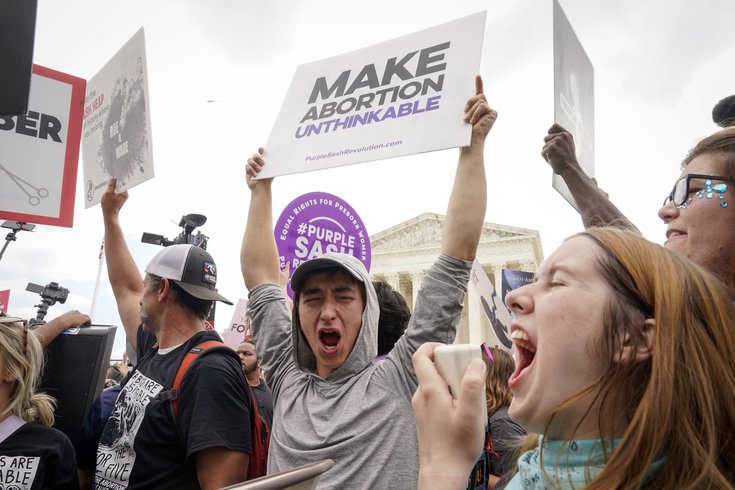 The U.S. Supreme Court stuck down Roe v. Wade, ending the constitutional protections for abortion rights. The 1973 landmark decision had legalized abortion in the United States. Anti-abortion demonstrators, shown above, gathered outside the Supreme Court building in Washington, D.C., moments after the decision was announced.

NOTE: Updates will be added to this article periodically.

The Supreme Court struck down Roe v. Wade on Friday, reversing course on the landmark decision that legalized abortion in the United States nearly 50 years ago.

In a 6-3 decision driven by the court's conservative majority in the case of Dobbs v. Jackson Women's Health Organization, the court has ended the federal protection for abortion rights and ruled that legality of abortion should be decided by leaders in each state.

Justice Samuel Alito wrote the majority opinion, calling "Roe was egregiously wrong from the start," and that abortion rights are not "deeply rooted in the nation's history or traditions." The opinion is fundamentally the same as the draft opinion leaked to Politico in early May – also written by Alito — which included an index of abortion-related case law in the United States during the 19th century, some more than a century before Roe was initially decided in 1973.

A copy of Alito's complete, 213-page opinion is included at the end of this article.

Dobbs vs. Jackson Women's Health Organization centered on a law drafted in Mississippi that bans abortions, in almost all instances, after 15 weeks of pregnancy. The law was challenged and had not taken effect because lower courts had ruled it violated legal right to an abortion established by Roe vs. Wade in 1973.

Appeals of the case ultimately went before the U.S. Supreme Court and lead to Friday's ruling.

Going forward, abortion laws will vary from state to state, meaning the availability of the medical procedure will become more restricted – often significantly more restricted – in some states. In others – like Pennsylvania, New Jersey and Delaware – laws protecting abortion rights will remain in tact, at least for the short term.

The Washington Post reported there are 13 states where the Friday's ruling, striking down Roe v. Wade, results in "trigger bans" that will prohibit abortions within the next 30 days, and other states are poised to pass their own laws in the coming month restricting abortion rights.

Chief Justice John Roberts and Justices Clarence Thomas and Brett Kavanaugh each wrote concurring, separate opinions, noting that abortion does not appear in the Constitution as a protected right.

In the joint dissenting opinion by Justices Stephen Breyer, Sonia Sotomayor, and Elena Kagan, they wrote that "With sorrow, for this Court, but more, for the many millions of American women who have today lost a fundamental constitutional protection — we dissent."

The opinion also overturns Planned Parenthood v. Casey, another landmark decision that established the "viability" metric for determining when states could limit or prohibit abortions based on pregnancy gestation.

After the draft opinion was leaked, federal lawmakers sought to use the additional time provided between the leaked opinion and today's official ruling to codify the right to an abortion in the U.S. Constitution, an effort that was ultimately unsuccessful. The Biden administration has been deliberating possible executive actions that could be taken in order to enable residents from states with bans to access abortion in other parts of the country, the New York Times reported.

Many parts of the country will retain or expand abortion rights in the wake of the Supreme Court ruling, though 26 states are poised or at risk to ban abortion altogether. Pennsylvania, New Jersey, and Delaware will retain their current abortion laws, though the lack of a federal abortion protection leaves the legality of the procedure up to individual states.

Some states where abortions remain legal abortion are expected to see an influx of out-of-state abortion seekers, as some Republican-led states have already begun moving anti-abortion rights bills through the legislature.

Over the last several months, abortion providers nationwide have sought to increase their supplies and resources in the event that Roe was overturned. Pennsylvania can expect a surge of as many as 8,500 abortion seekers primarily in the western part of the state, traveling in primarily from Ohio and West Virginia, which have already seen heavy restrictions on abortion rights in recent years, the Inquirer reported.

Dobbs v. Jackson Women's Health Organization is based on a challenge to a 2018 Mississippi law that banned abortion after 15 weeks gestation. The law makes exceptions to the ban for "severe fetal abnormalities," but does not make exceptions for rape or incest.

Jackson Women's Health Organization is the only licensed abortion provider in Mississippi. Its leaders challenged the law's constitutionality under the precedent set by Roe v. Wade, which has been embedded in American law for nearly 50 years.

Mississippi lawmakers and leaders who support the 2018 law wanted the Supreme Court to use the case as a way to officially overturn the 1973 decision once and for all.

Attorneys for the state argued that the two precedents — both Roe v. Wade and Planned Parenthood v. Casey, which established the "viability" metric for abortion legality — should be overruled, describing them as "unprincipled decisions that have damaged the democratic process."

As Mississippi is one of the states with a trigger law on abortion, the state is able to immediately ban the procedure entirely, with no time frame required.

Many of the proposed and previously approved abortion bans throughout the country would also ban the use of medication abortion, which The Guttmacher Institute found makes up more than half of all abortions in the United States.