Through give and take, Flyers' Kevin Hayes keeps on going

Hayes has been up and down the lineup, has been moved out from center to wing, has been benched, and even lost the 'A' on his chest. Yet he just keeps producing. 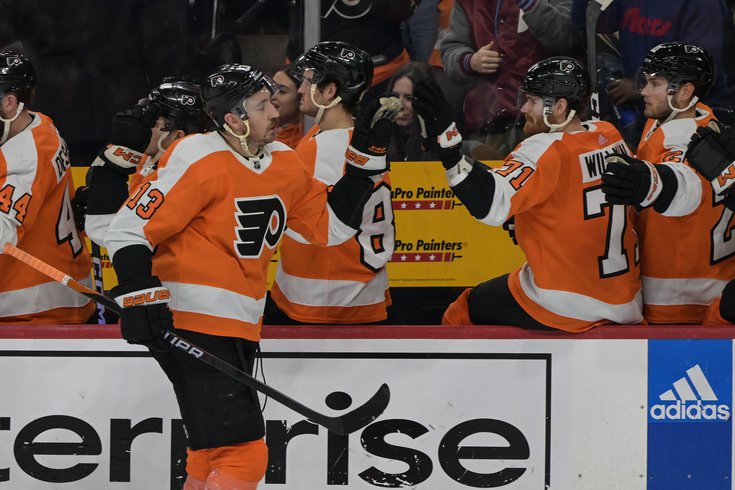 Flyers forward Kevin Hayes skates through the high-five line on the bench after scoring the empty-net goal against the Islanders that snapped the team's 10-game losing streak Tuesday night.

With the game in its final seconds, Kevin Hayes took the puck from center ice and fired it dead-center into the Islanders' empty net.

The crowd exhaled, the horn sound, the Flyers went up 3-1, and the Islanders didn't have enough time to come back.

For a night at least, the losing was over. The latest winless streak finally ended at 10 games, and probably no one deserved to officially put it on ice more than Hayes.

"A losing streak is never fun," Hayes, who has already seen way too many of them in his Flyers tenure said postgame on Tuesday. "We all have a job to do and we're supposed to win every single night and we're trying our hardest, but when you're not getting the results, it gets frustrating."

And the unfortunate likelihood is that the frustrations will continue well after this.

There are some saving graces right now, for sure – Carter Hart has been pretty solid in goal and Scott Laughton did just come back from injury – and Tuesday night finally brought a much-needed moment of respite, but the active roster as a whole is still banged up, relatively inexperienced, and at a lack for high-end talent.

There will still be some good nights, like Tuesday night, but a lot of tough ones too. Ones that come out flat, like Black Friday against Pittsburgh, and ones where there was a clear effort given, like Saturday night up in Elmont, New York, but just couldn't be fully put together.

It's just the reality of the 2022-23 Philadelphia Flyers, and an upcoming slate that doesn't get easier with the vastly talented Lightning, Devils, and defending Cup champion Avalanche all on deck.

What will make the difference for John Tortorella's group way later down the line is how they carry themselves through it, the good and the bad, and how Hayes, as a veteran in the locker room, has and continues to keep trucking forward is key.

"I don't want to say anyone was too depressed or mad," Hayes said of the winless streak. "You wanna win every single night, but you don't. All of a sudden losses keep piling up, you think you're gonna win at the end of a game then you go into overtime and you lose. Things keep adding up and I thought tonight, we didn't give ourselves a chance to do that. It was a good effort."

When Tortorella was hired as the Flyers' next head coach, one of the players he specifically zeroed in on during his introductory press conference was Hayes.

To try and realize it all, Tortorella has asked a lot of the 30-year-old skater, and in some cases, taken a few things too.

Hayes has been up and down the lineup, has been moved out from center to right wing, has been benched, lost his alternate captaincy (like nearly all of last season's leadership group), and has been kept off the ice in crucial moments.

And yet he's just kept producing.

In 23 games so far, Hayes has 24 points to stay just over a point-per-game pace and lead the team. During the winless streak, he still put up 10 points (four goals, six assists) through all 10 losses, and on Tuesday night, in 20:14 of time on ice, he scored twice in a game where the puck always seemed to find his stick whenever he was out there.

A big part of that, Tortorella said postgame Tuesday, is because of how hard Hayes has been working away from the puck.

"He's been so strong on the puck offensively," Tortorella said. "He's a good offensive player, we all know that. I think he's really stepped up on holding on to pucks offensively, and he's trying away from the puck. I think he's in a better spot playing wing where he just doesn't get as many opportunities as far as low coverage where there are some struggles in his game.

"So we're trying. A team that's starving for offense, I'm trying to take the pressure off of him defensively and not being worried about all those types of situations low. Let him work on the other part of his game. I think it's really helped him."

Brought greater trust too. Even in situations where it wasn't there as recently as 10 days ago.

At Montreal on November 19, when the winless streak was at five games, the Flyers had a 4-3 lead late and were trying to protect it to escape with the win. Hayes wasn't out there on the last shift. Canadiens star Cole Caufield scored with just 1.9 seconds left to force overtime. The Flyers lost in the shootout. The streak hit six.

Tuesday night, after Hayes scored off the draw midway through the first period for a 2-1 lead, the Flyers were trying to survive a final push from the Isles in the final minutes. Hayes' line was out there, he scored the empty-netter. The streak ended.