Flyers' Sean Couturier undergoes another back surgery, out 3-4 months 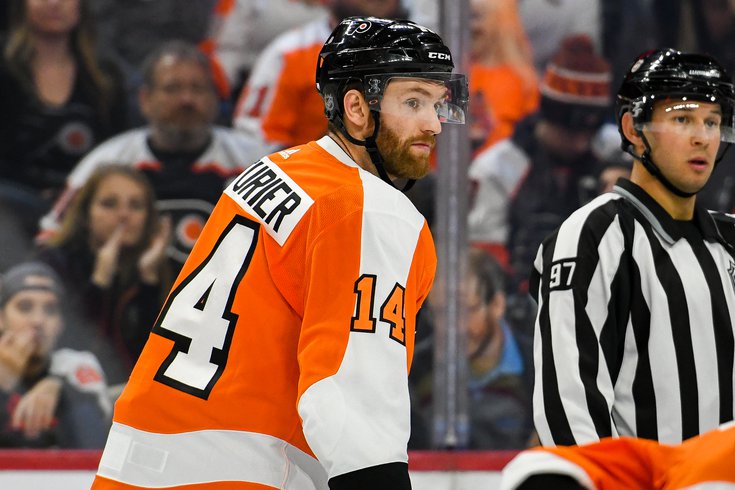 Flyers center Sean Couturier is expected to be sidelined for a few more months.

The Flyers have surprisingly stayed afloat to start the season, but they still can't expect to have their top center back anytime soon.

The club announced on Saturday that Sean Couturier underwent back revision surgery earlier this week and is expected to miss another 3-4 months, prolonging a frustrating road back to the ice that's been going since December of last season.

Couturier's 2021-22 season was officially shut down when he underwent his initial back surgery on February 11, but reported to Voorhees ahead of training camp in September saying he was cleared to play and that his back wasn't going to be an issue anymore.

Reports surfaced that Couturier re-injured his back right before training camp, and on the first day, general manager Chuck Fletcher told the media that he was out seeking a second opinion after experiencing tightness and nerve irritation. Couturier was given an unclear week-to-week designation for his injury while the Flyers tried to avoid surgery again, but that seemed to have become inevitable.

"This wasn't right for where he should be in the return to play process, so we, in speaking with several specialists, it became pretty apparent that surgery was the only way to hopefully resolve this," Fletcher said Saturday. "That's the one positive out of this. There's been so much uncertainty going back to – I remember sitting at the draft in Montreal and reading the medical report and thinking 'he shouldn't be at this place' – But I think there's finally a little bit more clarity and hopefully for Sean, there's some relief so he can feel better, and then ultimately we're still hopeful he can come back and play."

The revisions surgery was performed Dr. Andrew B. Dossett in Dallas, in the same area as Couturier's initial back injury.

"Essentially, they went into the same area and had to do some more repairs," Fletcher said. "With Sean it's been a long road, even going back to June and July...He felt tightness, he felt some nerve irritation from time to time and he was told to continue to train, and he felt better as the summer went along. Prior to camp, symptoms started to get a little bit worse so we pulled him back. We tried to treat it non-surgically. He got an epidural. It brought instant relief, for a couple weeks he felt great, the best he seemed to feel in a long time and then that seemed to wear off and the symptoms came back again.

"So it's sort of been four or five months of this persistent nerve irritation. So after speaking with a few different specialists, it was decided to go back in and to repair."

Updated / corrected timeline on what we know about Sean Couturier's journey from injury to now: pic.twitter.com/mEPOqllL7V

Couturier, 29, is the longest-tenured Flyer and is in the first of an eight-year, $62 million contract. He was looking for a fully-healthy bounce-back year and figured to be a key veteran piece to John Tortorella's roster, but any of those plans fell apart quick.

"It is what it is," Tortorella said Saturday.

Now that he's expected to miss even more time, Couturier is likely headed for long-term injured reserve with Ryan Ellis and Patrick Brown.

Additionally, James van Riemsdyk, who took a shot off his left hand in last Sunday's 3-0 loss to San Jose, had surgery on his index finger and is expected to miss six weeks.

Cam Atkinson, who hasn't skated yet this season with a vague upper-body injury, has his status still somewhat up in the air too.

"Clearly more week to week at this point than day-to-day," Fletcher said. "But not by much. He's made some progress. It's been frustrating for him. No one wants to play more than Cam. We'll just see how things progress."