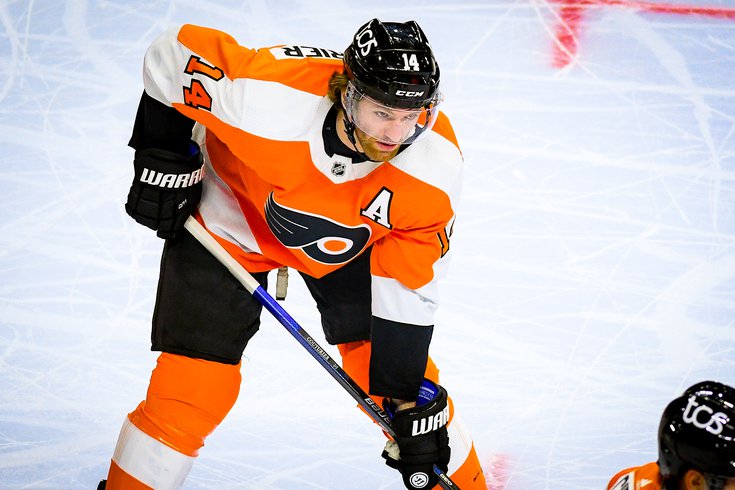 Flyers center Sean Couturier, shown against the Penguins on January 13, 2021, might be out a while.

The Flyers announced Monday evening that center Sean Couturier sustained an upper-body injury and will be re-evaluated during training camp. His status is week-to-week.

How severe things actually may be though isn't clear.

Crossing Broad's Anthony SanFilippo initially reported that Couturier has a herniated disc in his back and is expected to miss significant time.

According to SanFilippo, Couturier suffered the injury during off-ice strength and conditioning drills last week, which would have been just days after he told the press that he was fully cleared to return from last year's season-ending back surgery.

The 29-year-old skated in just 29 games during the 2021-22 campaign before lingering back issues and surgery to address them shut him down for good in February.

Per the Crossing Broad report, it isn't clear if this injury is related to Couturier's previous back issues, but it could cost him at least 12 weeks.

Sportsnet's NHL insider Elliotte Friedman added that Couturier began experiencing pain during a skate within the last few days and that he and the Flyers are currently seeking a second opinion.

More detail on @AntSanPhilly story here: Couturier and Flyers are seeking a second opinion to determine exact nature of injury. Pain occurred within the last few days during a skate. While it is in same area as previous injury, there is not yet certainty it is the same injury. https://t.co/H0yNQAPWCB

Either way, this looks like it could be a devastating blow for an organization that really couldn't afford one.

Even outside of Couturier, the Flyers were banged up all of last season and that carried over into the summer with sudden neck surgery for Joel Farabee, a torn hip labrum for Bobby Brink, and the status of Ryan Ellis' rehab from a "multi-layered" lower-body injury still a complete mystery.

After a disastrous season that saw the Flyers finish as the fourth-worst team in the league and an offseason marked by a deflating free-agency period for the fanbase, general manager Chuck Fletcher was banking on the fully healthy returns of Couturier and Kevin Hayes to help turn the tide as the No. 1 and 2 centers.

Couturier was even looking for a bounce-back year himself because, when healthy, he's easily one of the best 200-foot centers in the league.

"I wanna prove that I'm healthy again and I can be back to the player that I was, maybe even better," Couturier said last week. "I'm going to push myself this year to do that."

The push, unfortunately, now appears to be on hold. It's just a matter of how long.

Training camp opens Thursday at the Flyers' training facility in Voorhees and Couturier is entering the first of an eight-year, $62 million contract extension.

The longest-tenured Flyer on the team following Claude Giroux's departure back in March, Couturier has long been considered as next in line for the captaincy.

However, between news of another injury, other viable candidates in Hayes and Cam Atkinson, and head coach John Tortorella's declaration two weeks ago that he is in no rush to name a new captain, it's uncertain who the C will be going to if it even goes to anyone at all.