Tortorella told NHL.com he has his doubts that Ellis will be ready in time 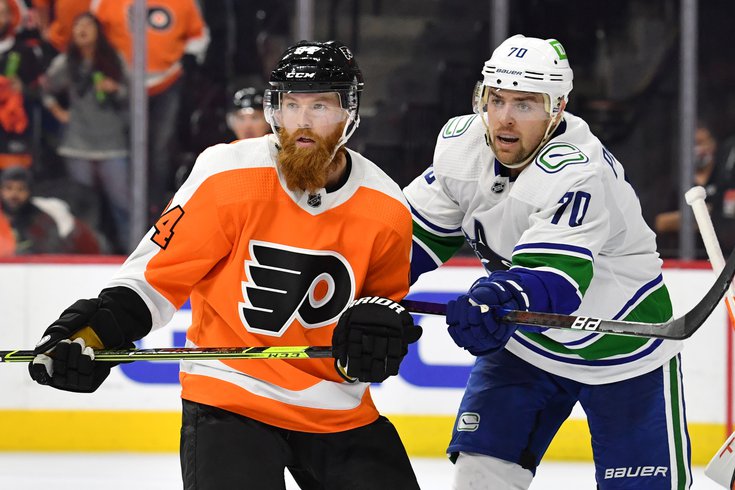 It's hardly surprising at this point, but Ryan Ellis may not be ready for the start of the season.

"If you're asking me right now, I doubt it," head coach John Tortorella told NHL.com's Adam Kimelman on Monday.

The 31-year old defenseman was acquired from Nashville last summer for Nolan Patrick and Phil Myers and was expected to be Ivan Provorov's partner on the top pairing for a quickly made-over roster.

And he was... for all of four games, then a mysterious lower-body injury kept him sidelined and out of the public eye the rest of the way.

At the end of the season during exit interviews, things got more specific: A series of multi-layered issues in his pelvic region, but ones that wouldn't need surgery, had a plan for recovery, and for Ellis, brought optimism.

"It’s just more or less a multi-layered problem," Ellis said back in May. "It wasn’t just a one thing fix all and that was the problem, trying to figure out what was going on. It had multiple levels of what the problem was.

"We have a plan. Everyone’s very happy and comfortable with the plan and I’m excited to be ready for training camp. It’s going to be a long summer, trying to get through it all, but I’m excited."

That optimism has since waned. In the months since, general manager Chuck Fletcher has been hesitant to commit to a timetable for Ellis' return and traded with Carolina for Tony DeAngelo as insurance.

Now Tortorella has spoken the concern fans have held aloud.

"I've had several conversations with Ryan Ellis as far as how he's doing," Tortorella told NHL.com. "That's been an up and down process for him. He's doing everything he possibly can to get ready for camp, [but] I'm doubtful that's going to happen."

The Flyers fell apart for more reasons than not having Ellis last season, but as the efficient puck-moving defenseman he was in Nashville and expected to be in Philadelphia, they definitely needed him.

Provorov routinely played huge minutes on the top pairing, but struggled in doing so without a reliable partner, growing prone to turnovers and often wreckless decision-making with the puck.

And now it looks like the Flyers won't have Ellis as part of the plans for at least when the 2022-23 season begins against New Jersey on Oct. 13. The recovery still has a ways to go.

"This isn't a reoccurring injury," Tortorella said. "He wants to get it right. You've got to remember what Ryan Ellis is; he's a competitor. When he plays, he plays hard. He's more frustrated than anybody about this, that it just hasn't been able to get straightened out."